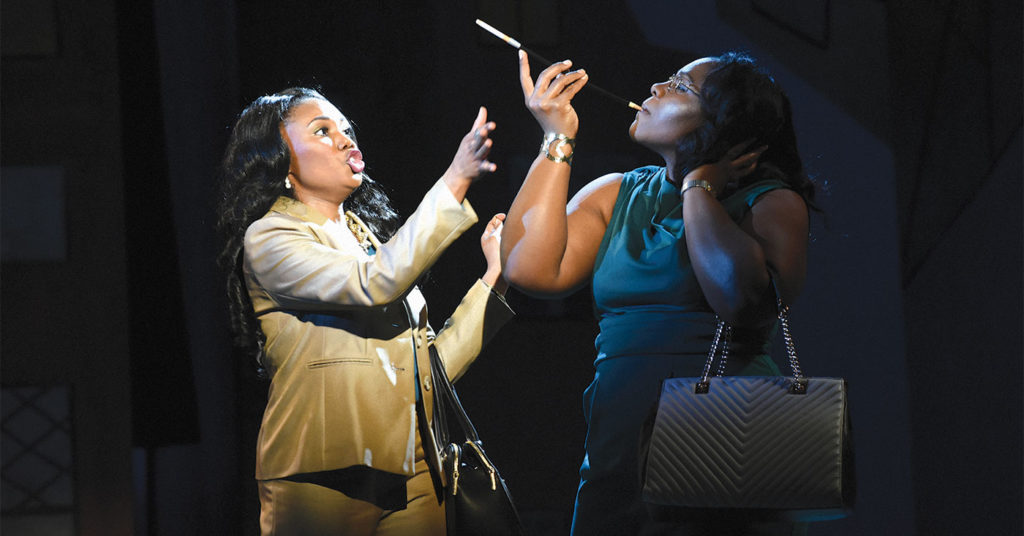 Kala Ross as Undine, and LaShondra Hood as Rosa in Lynn Nottage’s ‘Fabulation or the Re-Education of Undine’ at the UofL Playhouse. Photo by Tom Fougerousse

Nottage is a celebrated playwright and an important part of the theatrical conversation of the moment; her 2017 play “Sweat” won her the second of her (so far) two Pulitzer Prizes.

It can be difficult to approach the works of African-American playwrights. To relegate them to a representation of their race is a disservice to them as artists, and can also allow audiences to miss the complexity and depth of human experience that is being explored onstage.

At the same time, looking at the theater landscape and seeing the disproportionately small number of African-American playwrights being produced across the country, it becomes obvious that to ignore race in the conversation about black playwrights is to tacitly endorse a system of culturally enforced white supremacy that has gone on for too long.

The same could be said of women and women-identifying playwrights; they’re more than their gender, but they’re underrepresented, and their work usually has to include a conversation about gender.

“Fabulation” is essentially the story of a woman, Undine Calles (Kala Ross), who has denied her upbringing and heritage to find success. It’s an iteration one of the great stories of human nature, likely made increasingly relevant as a succession of societal changes over the last couple of centuries has caused young people to leave their families and communities for greener pastures.

Given the racial divide in American society, for Undine this means rejecting her black, working-class family and community for success in an upper-class and predominantly white environment. Then, when Undine experiences a reversal of fortune, she comes back to her community and quickly becomes re-acquainted with some of the harsher realities of the lives of working-class and poor African-Americans.

“Fabulation,” as a script, does double duty. The audience for a lot of theater reflects a dynamic similar to that of theater makers, i.e., mostly white. So on one hand, “Fabulation” is a humanization of, and education about, the working poor for a likely audience of middle-of-the-road, white liberals that often only pays lip service to issues of racism.

At the same time, the love and honesty with which Undine’s working-class neighborhood in Brooklyn is drawn also works as a joyful study of community and culture, recognizable and emotionally cogent to any audience, black or white.

Undine acts as a frequent narrator and monologist, and she’s the only character who really goes on any sort of personal journey. So the play lives and dies on the shoulders of Ross.

Undine is pretty unlikable when the play opens, barking orders into her Bluetooth at a 100 miles a minute, in the bullying manner of an Important Person used to getting what she wants. Unfamiliar with the script, I spent a few moments despairing at the prospect of watching two hours of this character.

In hindsight, this was a bold choice from the director and actor, meant to make some pretty clear statements about Undine’s character. It’s something of a gamble on the part of director Jacqueline Thompson; it gives Ross’s Undine a huge opportunity to portray growth and change, but came perilously close to losing me within the first few moments of the play.

The gamble pays off, and, as Ross’s Undine is deflated and humbled throughout the play, she becomes someone with whom the audience can identify. Ross is given ample opportunity to show off her dramatic abilities, but her comedic chops are even more on display in a variety of fish out of water experiences. Despite her woeful list of failures, Undine keeps much of her earlier snobbish attitude, until the last few moments of the play strip the last of her defenses and she opens up completely.

Ross gives her all to the ensuing climax, committing and diving deep into a painful and long moment of nearly wordless emotion. It’s an impressive and brave moment of commitment. It’s also a moment Thompson’s confidence as a director shows through. She knows to give the moment that much time to breathe

The are dozens of other characters in the play, brought to life by the hardworking, 10-member ensemble, each taking on three to five characters. Some members of the ensemble have rough moments, reminding us that these are students after all.

The most-realized supporting characters are the members of Undine’s family, particularly Grandmother (Mutiyat Ade-Salu) and her brother Flow (Xavier Harris). Ade-Salu gets to play with familiar grandmother trope and throw some spice into the aged matriarch, while Harris gets to deliver a rather awesome spoken word piece.

Guy (Tyler Madden) is another almost-well-rounded character, introduced in the second half of the play. Madden grounds his character in a way that serves as a nice contrast to many of the more outsized figures that move through Undine’s life.

“Fabulation,” like many of the UofL productions, has a few rough performances, but still earns a place in the higher echelons of Louisville theater.