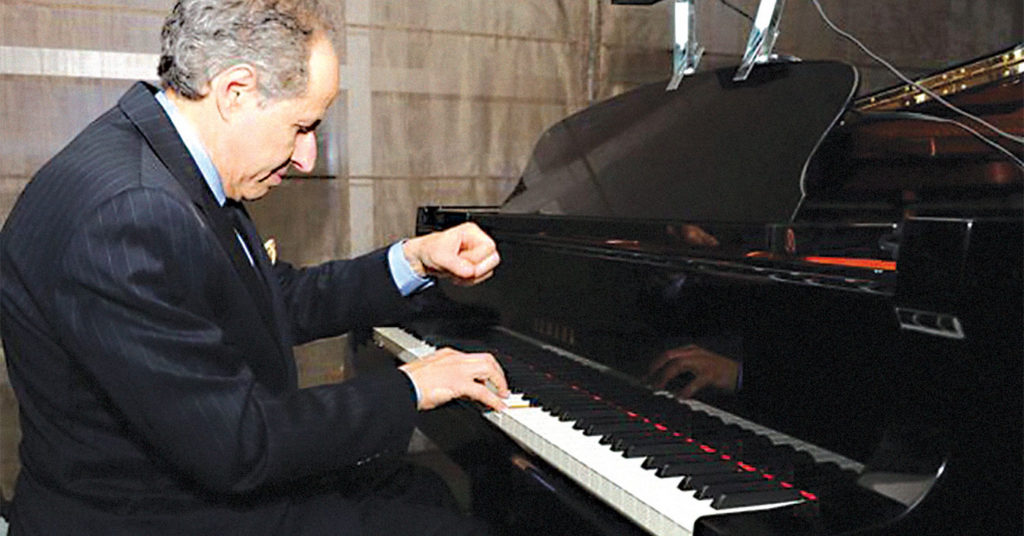 Any notion that classical music is an abstract art that is somehow isolated from the real world is pretty well refuted by last weekend’s Louisville Orchestra program and this Sunday’s Chamber Music Society of Louisville concert. The Orchestra concert focused on the theme of “War + Peace,” and the Chamber program features a masterwork composed in the harsh crucible of a German POW camp during World War II.

The Chamber program presents Music from Copland House, the resident ensemble at Aaron Copland’s National Historic Landmark Home. Over the years, the ensemble has emerged as one of the leading champions of contemporary music — partly by commissioning dozens of works, and partly by playing an enormous repertoire.

The best-known piece on this weekend’s program is “Quartet for the End of Time,” by the French composer Olivier Messiaen. As pure music, it is sublime. Alex Ross of The New Yorker described it as “the most ethereally beautiful music of the twentieth century.”

And its backstory is among the most remarkable anecdotes in music history.

During the summer of 1940, Messiaen, while serving in the French army, was captured and locked up in a German prisoner of war camp near the Polish-German border. His fellow prisoners included a few other musicians. One of them, a Jewish clarinetist, pressed the composer to pen something.

An anti-Nazi Belgian guard helped, by suppling Messiaen with paper and pencils. Eventually Messiaen produced a work for piano, violin, cello and clarinet. There was no cello in the camp, but, undaunted, the prisoners took up a collection to acquire one.

The work premiered on a bitterly-cold day in January 1941 before an audience that included prisoners and German officers.

Sometime afterward, the Belgian guard used a potato to make a stamp that he then used to forge documents that Messiaen and the ensemble employed to escape. Messiaen survived the war in France. The Jewish clarinetist was apprehended during the escape and forced to returned to the camp — but managed to escape yet again and eventually made his way to safety.

The other piece on the program. “Living Frescoes,” is by American composer Kevin Puts. Puts is renowned for his operas and orchestral works. Yo-Yo Ma premiered his cello concerto. And his opera “Silent Night,” which recounts the famous spontaneous Christmas Truce on the Western Front in 1914, earned Puts the Pulitzer Prize in 2012.

Puts’ chamber music also has earned critical plaudits. “Living Frescoes,” which premiered the same year as the Pulitzer, was inspired by a set of digital video frescoes created by the artist Bill Viola; the images will be projected during this weekend’s performance.

The work — which shares the same scoring as Messiaen’s piece, traces the “path of the soul” via a wide array of musical textures and gestures — and when it premiered, one critic described it as “the most moving piece of art” he had experienced that year.

Notes on the Orchestra:
Last weekend’s Louisville Orchestra concert, curated and conducted by Music Director Teddy Abrams, explored the theme of “War + Peace” via 10 wildly-eclectic selections. It was a grand, sprawling multimedia event, spirited and spiritual. And the combined sounds of the orchestra and voices of the Louisville Chamber Choir and the UofL Collegiate Chorale (both superbly prepared by Kent Hatteberg) were formidable, indeed.

The program ran the gamut from a Charles Ives’ tribute to World War I doughboys to Arnold Schoenberg’s unsettling cantata, “A Survivor from Warsaw” (with text narrated by the baritone Chad Sloan).

The highlight of the program was the world premiere of Sebastian Chang’s “Between Heaven and Earth.” Described in the program as a collaboration with artist Vian Sora, it’s scored for orchestra and chorus (with text by Chang) and was accompanied by video projections of Sora’s art — pieces that reflect events in her native Iraq over the last couple of decades.

It’s a moving, transparent piece that certainly deserves to find a permanent spot in the orchestral repertory. The first movement is built around a simple, sturdy, supple figure that gradually is woven into a shimmering cloud of sound. The second movement is a sort of fractured waltz. And the final movement (which ends with words from a Buddhist sutra) closed with a passage that brought a listeners to the very brink of what seemed like a standard liturgical cadence — and then held them there to shattering effect. •