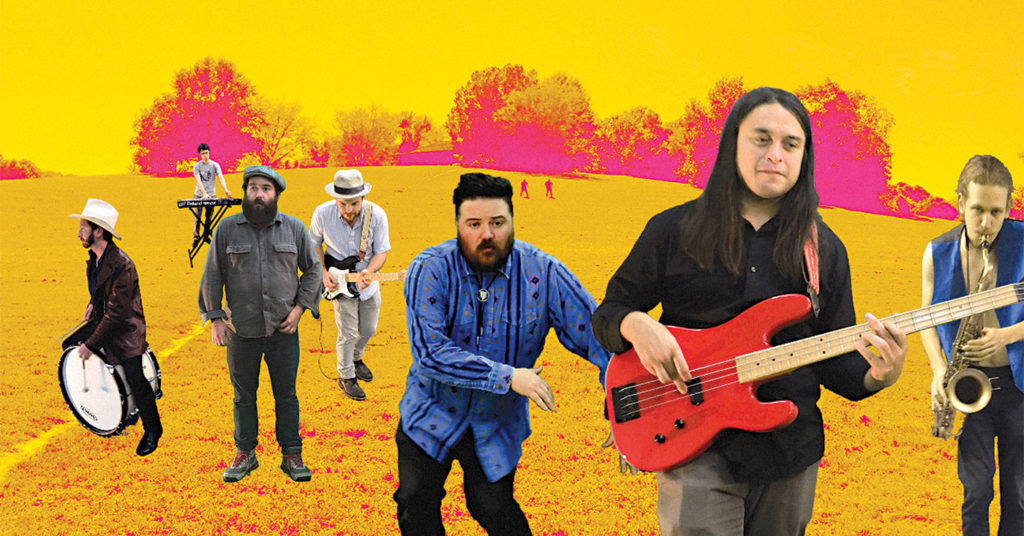 In a snug room above his family’s carpet business, Drew Miller, the lead singer and alto saxophonist of the genre-defying Curio Key Club, workshops new material with his bandmates. Gig posters collected during Miller’s tour stints with Bonnie “Prince” Billy and Houndmouth fill the room, while Brandon Bass’ original illustration featured on the cover of Curio Key Club’s debut album from 2016 hangs near the entrance. To the right is a hefty collection of classic rock and pop vinyl (inherited from his aunt), where several Billy Joel LPs and a Steely Dan Greatest Hits peek out. This is also where Miller creates most of the media (music videos, album art, fake band photos) on a desktop computer sitting across from a drum kit, including the cover of Curio’s new EP, Zen America.

The eight-track EP is likely the most-straightforward assortment of songs to come from Curio Key Club. While it’s not a dramatic sway in their sound, its tightened focus on rhythm and lyrics contains each piece.

“There’s definitely still room for improv, but a lot of the songs have less space — it’s not as open,” Miller said, after giving me a tour of the band’s practice space. “I still wanna have that spark, those interactions, the spontaneity, but a lot of the forms are pretty mapped out, and it does give the music more of a poppy vibe.”

Most of the members of Curio Key Club graduated from the jazz-rock ensemble (and Drew Miller-led) D’Arkestra, a project that dissipated in 2014.

“The music I was writing started to take on a different vibe,” Miller said. “We just felt like we should transition to a new identity and start building something — shed previous conception or reputation.”

With support from Graeme Gardiner (tenor saxophone), Joe Thieman (trumpet), Wade Honey (keys and synthesizer) and Zack Kennedy (drums), and the additions of bassist Jose Oreta and guitarist Ken Allday, Curio Key Club set out to clear another place in the vast world of experimental music, drawing a fusion of influences capable of seamlessly dancing around genres.

It was a busy cluster of years leading up to this point. In addition to the inevitable conflicts that come with managing a group of in-demand players, Miller toured with Bonnie “Prince” Billy through 2015, and, on the heels of Curio’s first album the following year, he and Gardiner joined Houndmouth on tour, where they discovered drummer Shane Cody was also an excellent recording engineer. It didn’t take long for them to realize Cody would be an integral “eighth member” of the Club during the creation of Zen America.

“It’s like a two-way street of trust in somebody,” he said of Cody engineering the record, which will be released via a concert at Headliners Music Hall on March 2. “Some bands don’t want to share that vision or share the process, other than the technical aspect.”

A few weeks ago in the downtown basement jazz club Jimmy Can’t Dance, I observed a musky scene — well-dressed folks squeezed between bricks and cushioned booths, ladies tipped over red wine and bodies, everywhere, either dancing or hunched toward the band. The members of Curio Key Club (joined by percussionist Meg Samples) were on stage performing as their other face, Fela Booty, honoring the influential sounds of revolutionary bandleader and father of afro-beat Fela Kuti, a musical form they navigate almost too well. And, at that moment, resurfaced the same rhythmic energy and the brass-driven optimism of Zen America’s opening song “Beat Goes On.”

“We’re definitely closer as time goes on,” Miller said of the band members performing together in different projects throughout the years. “And how that affects the music: you get to write together more, arrange and you’re able to allow each other space because it is a give-and-take kind of thing. If no one’s willing to go with you, or let you stretch or search, explore, then it’s all one-sided.” •