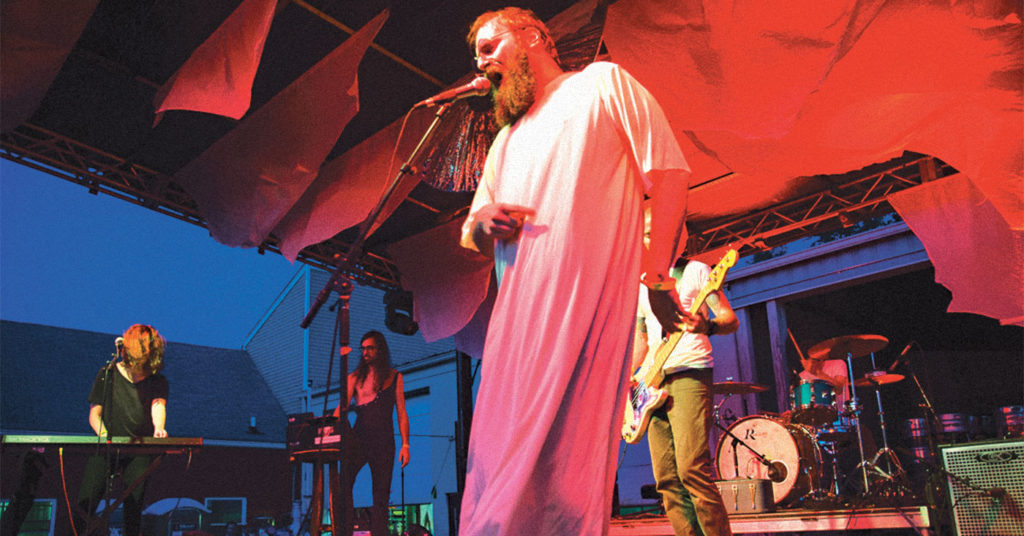 The DIY record label is throwing a three-day, 12-band event

auralgamiSOUNDS, a local DIY record label led by JC Denison and Matt Dodds, hits genres all across the map, which is evident on Kirigami, a 14-song compilation that marks the company’s third year of existence.

Ranging from the garage rock of Cereal Glyphs, to the compositional work of Rob Collier, to the proto-new-wave of BodyCocktail, the compilation will be released during Paper Anniversary 3, a three-day event where 12 of the label’s bands will perform at Kaiju and Decca.

“It’s a lot of different things in a row,” Dodds said. “It’s a pretty drastic variety of weird genres.”

For the duo Bird/Trooper, who not only are dropping a song for the compilation, but are releasing an upcoming EP, working with the label is a welcome opportunity. Their contribution to Kirigam “At Last, Another” features a homage to William Blake’s poem “The Tyger.” In the song, singer/guitarist Dave Bird offers a pastoral reflection on the world around him, a fitting track to a mixtape centered on community.

“Working with auralgamiSOUNDS has been incredibly effortless and humbling,” Bird said. “JC and Matt are clearly in it for the love of music and their interest in documenting the things that they love locally, and I think I can speak for [Bird/Trooper keyboardist] Tricia [Cooper] as well in saying that we just love and admire them both so much. I’m considering it a privilege to be opening for their Paper Anniversary, especially with so many incredible acts we get to share the bill with.”

For Cody Johnson, otherwise known as Soft Self Portraits, his contribution to the compilation marks a shift from solo artist to a collaborative project. Joined now by Kacy Machir on drums since last summer, the duo has made furtive steps in realizing a now shared vision. As with many of the artists who work with the label, Johnson met Matt and JC through their shared love of music.

“The first show I remember seeing after moving back to Louisville featured The Wrists and Watter and Matt was near the bar at New Vintage slinging tapes,” Johnson recalled. “Since then, I’d sent him and JC several emails but couldn’t ever get the timing right until late 2016. I’m lucky to be a part of a little collective that includes a ton of diverse talent in the Louisville scene.”

Starting out life as a small imprint for Denison in Chicago, auralgamiSOUNDS came to life when he returned home and teamed up with Dodds, a former bandmate in Lucky Pineapple. While the pair had never run a label, they had plenty of experience working with labels and the accompanying minutiae that goes into seeing an album go from concept to fruition to out in the world.

“It’s nice that people are still interested in the stuff that we do and still want to work for us and want to get the things that we put out enough that we still feel relevant,” Dodds said. “It still feels completely enjoyable and I’m glad that it does.” •