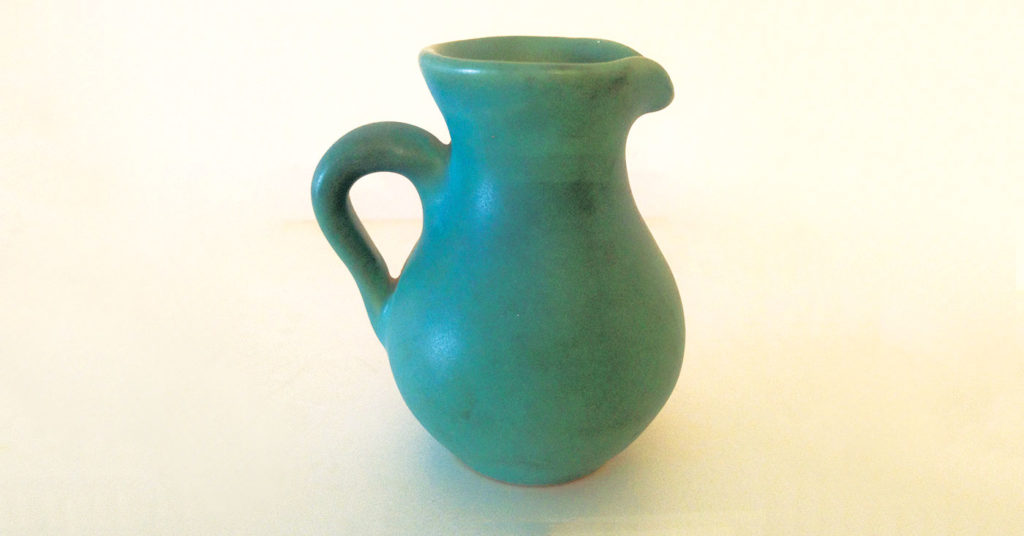 What’s the value of is this small pitcher by Van Briggle Pottery? We will find out when ‘Antique Roadshow’ rolls into Louisville May 22. (Photo by Jo Anne Triplett)

Are you an avid watcher of “Antiques Roadshow”? Do you want to be a participant in the show PBS calls “part adventure, part history lesson, part treasure hunt”?

Then, this is your moment. It’s coming to Louisville on May 22, for the third time. Here’s what you need to know:

If planning to attend the taping in person, know that it’s loud. Very loud. Why? People, lots of people. When I attended in 2007, the Kentucky International Convention Center had been converted into an arena with appraisal stations. “Roadshow” personnel directed participants, all clutching items or wheeling them in carts, to the appropriate location. Outside was a long, snaking line of additional ticket holders, waiting for turns with the experts (there are three shifts). The excitement, coupled with nostalgia and hope, was palpable.

Ticket holders can bring one or two items for appraisal. As I wrote about the 2007 taping in the July 31, 2007 issue of LEO, “collecting takes center stage. The show’s success stems from how it illuminates the relationship between a person and his or her object and having professional appraisers fill in the storyline with more history about the object and, finally, its market value.”

My treasure: A Van Briggle ceramic I got from an aunt who loved to go to flea markets. She didn’t know anything about Van Briggle — she just liked the color. My guess is she paid a couple of dollars for it. I have a small collection of American Art Pottery, including three Van Briggle pieces. The Van Briggle Co., the namesake art pottery created by Artus and Anne Van Briggle, started in Colorado Springs, Colorado, at the beginning of the 20th century. After Artus died in 1904, Anne continued production. After her death in 1929, the company stayed intact and continues to create art pottery today.

My pitcher is hand thrown, not a production piece. Dating a Van Briggle ceramic is difficult after 1920 when it stopped adding the year. Going by the bottom markings and color, my guess is it’s from the 1940s-‘60s. I brought this piece to the 2007 event but didn’t get the chance to talk to the proper expert — he was on lunch break! I spoke with a collectibles expert, not an Arts and Crafts expert, who guessed it was worth $25 to $50. I’m hoping to get confirmation that it is mid-century and a better, or at least accurate, accounting of its value.

The location has not been announced. “Antiques Roadshow” is doing something different this year by filming in historic locations in each of the 2018 cities (Sarasota, Florida; Tulsa, Oklahoma; Rochester, Michigan; and San Diego as well as Louisville). My guess is Churchill Downs will be chosen for Louisville. It’s historic, has room for thousands of people, as well as parking. I’ll put the location on LEO’s art twitter (@jtriplettart) when it’s announced. •