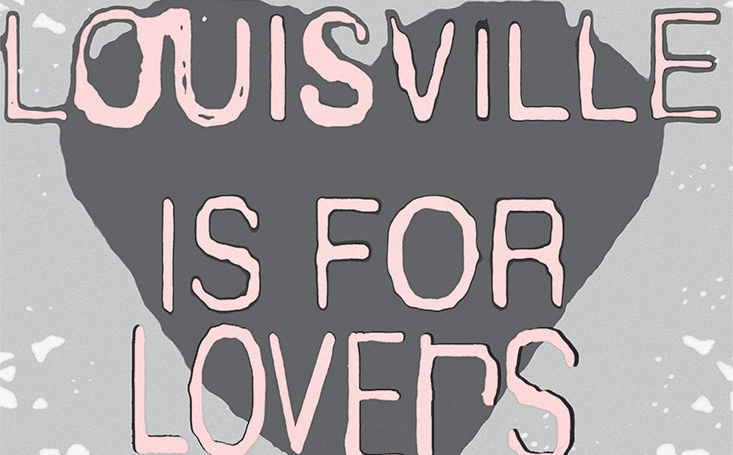 Love is universal, but it’s far from a similarly-experienced, perceived, felt, described or understood feeling. It pulls us in a bunch of different, idiosyncratic directions that lead to joy, pain, humor and endless other emotions, which is why the annual Louisville Is For Lovers compilation is so interesting. The yearly compilation project asks local bands to record an original song inspired by love. That’s it. No other prompts. The 2018 edition — subtitled Darlin’ Beloved — runs the spectrum, from learning to love post-sobriety to passionate anger and falling for a cannibal. To gather all the concepts, we asked musicians from Darlin’ Beloved to explain their songs. The Darlin’ Beloved compilation is available on Bandcamp and at Guestroom Records.

S.V.S. — ‘Bikes In The Bedroom’
“Bikes In The Bedroom” explores the confusion of falling in love. Trying to figure out if the feeling is fleeting or reciprocated. Learning more about a lover by spending time in their living space. Teetering daily between euphoria and worry. Once you think you’ve got it figured out, everything can still change quickly. It captures a moment when there was supposed to be a key, but one wasn’t left behind. It’s a love song that is built up, but fizzles out. By the end of it, we did share a few bike trips. —Jordan Sanmeister

Frederick The Younger — ‘Sleep With The Lights On’
“Sleep With The Lights On” is a love song I wrote for [bandmate and boyfriend] Aaron [Craker]. It’s about being so close to someone that you feel like one person. And about wanting to hold onto certain moments together. And not caring what anybody else thinks of your relationship. —Jenni Cochran

Adventure — ‘You Can’t Take My Place’
After an argument in a laundromat, the split happened. And our so-called hero of the story keeps running into his replacement — you know the one — the guy with more muscles, a better smile, nicer teeth and a fancier car. Our so-called hero can only hope to convince himself that the replacement boyfriend isn’t as good as he was (or at the very least can’t karaoke Waylon Jennings songs like he can). Love lost indeed. —Phil Medley

Soft Self Portraits — ‘Wistful Thinking’
Currently, I’m in the third year of sobriety, and without delving too deep into details, the song follows a path of returning to yourself. The lyrics touch on being lost in destructive patterns, losing yourself and learning to love again. —Cody Johnson

Killii Killii — ‘I Love You Don’t Eat Me’
Our song, “I Love You Don’t Eat Me,” is the story of Tobias Schneebaum. While painting on a Fulbright Fellowship in Peru, Tobias became intrigued by the local tribes and was accepted into two different cannibal tribes. In the second tribe, he fell in love with a man and also participated in the ritual of cannibalism. He left that tribe and went home after nine months, but returned in 1999 to find the man still there, and still as charming as ever. —Salena Filichia

Kabuwe — ‘More Medicine’
Kabuwe recorded the bulk of “More Medicine” in a cabin at Natural Bridge near Slade, Kentucky. Like that setting, the song deals with the power of the natural world, but also the vulnerabilities and innocence there. Similarly, the song explores that push and pull in the context of people risking connection. —Michael Karman

Jaye Jayle — ‘Let That Train Stop’
The character in this particular story is a traveling man with no name, and, when he travels, he travels by train. He’s not traveling for any particular reason, mostly just to see the land and have an experience. He lives for a new experience, as well as deep human connection. Occasionally, the nameless man will meet a lady. The two of them will thoroughly enjoy each other’s company throughout a very loving evening. They’ll cordially part ways, and he’ll get back on that train. This story is about the complications that come along with this particular kind of love. —Evan Patterson

Cephus — ‘Wild:Crazy’
“Wild:Crazy” is a rather self-explanatory concept. Wild is to crazy, what you are to me. It’s a smooth groove with love-making undertones. The teetotalers and do-gooders won’t get it. This song is for the rest of us. The ones who like to drink and funk. What couple is perfect? What couple doesn’t fight? Rhetorical. The point is that you’re doing it together. You love each other so much, your disagreements don’t even matter… because you’re doing it together! So relax, this song may turn out to be part of your soundtrack. If you’re sexy! —Toby Jay

Heat Machine — ‘For the Love of Vinegrove’
This song is an amalgamation of a few stories from Vinegrove, Kentucky I heard growing up, about how you stay with the one you love despite constantly griping about the time they tried to kill your dog, wrecked your truck, spent the rent and currently neglecting you for the church. Yet you just cannot live without them. —Tony Downs

The Winger Brothers — ‘Drinks Are on Me’
“Drinks Are On Me” is a song about buying people drinks. I thought it was a Toby Keith song, but I actually wrote it. There’s a line in the song: “Sometimes you’re the bucker sometimes the buckee.” Not sure what that means? Maybe it’s about love.
—Jordan Humbert

Future Killer — ‘I Was Young’
Love is a perception, romance of the heart and mind, passion behind the wants and dreams of life, harmony between people. Time is a test of love and perhaps the greatest ally to perception. Don’t let the acknowledgment of love and the conjuring of its presence take a lifetime.—W. G. Rickel

Sweet Sand — ‘On Your Heart’
I had just dipped my toes into the cool sauntering stream, as a hesitant breeze with hints of lilac and spruce feathered my face. I could almost perfectly define my reflection, when the massive, skinless, red arms of the devil exploded through the ground and ripped open my sternum, unfastened my heart and shoved it into my own back pocket. While recovering from successful surgery, I was visited by the white-hot rhythm section of the Swinger Sisters, and the silk-smooth, electric uke player, V. Blades. I wrote, and we recorded this song, before the nurses had to rub the paddles together again.—Wayne Alan Reid