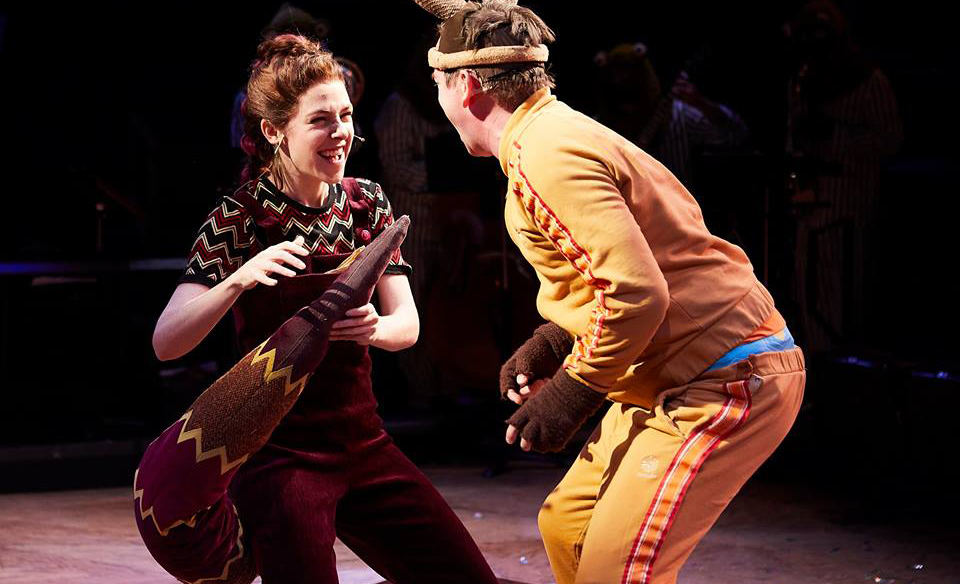 This week, Actors Theatre of Louisville premiered playwright Anne Wasburn’s children’s musical “Little Bunny Foo Foo,” based on the adventures of the eponymous rabbit of the popular children’s song. LEO sat down with Washburn a day before the show opened to talk about this departure from her more serious, adult-focused work. Note: This interview was done before I saw the production. Having since seen it, let me say it’s jaw droppingly joyful, and everyone should go see it. It runs through Feb. 4.

LEO: Does working in a fantastic setting allow you to access themes or ideas that aren’t easily explored in a more mundane setting?
Anne Wasburn: I feel like this idea that a play is strictly about reality is new. That’s a fairly recent development in playwriting. Plays have always been sort of a combination of the fantastically and the social. The observed, and the crazy theoretical. So, I don’t feel that I’m writing fantastically — I feel like I’m writing. This idea of plays as photorealism, which is its own kind of gene and has its own strengths and satisfactions, it’s just not the only way to do it.

LEO: The dance?
[Hums ‘Bunny Hop’ to illustrate] Both of which I learned as a small impressionable child, but when you put it together, I think the dance, that’s a different sonic world, too. Which has a lot to do with where the play kind of landed for me musically, which is something [composer] Dave [Mallow] has totally exploited, gloriously, in his own crazy ways.

But, I know I was writing a big, ambitious project, which I’m still writing, and to take a break from it, there was some three week period, and for whatever reason I started in on [‘Bunny Foo Foo’]. And I thought it was going to be an adult antiwar musical that would be ‘Bunny Foo Foo,’ but this whole different thing.

And then I was like, ‘Great, I have this children’s musical, which I would like to see children perform, and children watch.’ And, then, Les [Waters, Actors’ Artistic Director] somehow got wind of it.  And I was gonna have a reading in New York, and he came, and was interested.

I may be misremembering, but I feel like there’s not a whole lot of plot inherent in the version of ‘Little Bunny Foo Foo’ that I remember
Oh, you got the un-complex version? [Laughs]

Yeah! I don’t know, there are so many songs that there’s a second verse, and you’re like (makes head exploding sound). And if I had a jillion dollars, I would pay someone to map the vectors of children’s songs pre-internet.
Right? Yeah.

But how did you mine that seed to grow the story?
It’s a very pure story. The variants are what happens to the field mice. I learned bopping — no, actually, I learned bashing. There’s bashing, there’s bopping and there’s like a much gentler version that has been popularized, I think they’re being patted? I think it’s sort of, people became frightened of the song at some point.

I learned blue.
There are these little variants in terms of the violence level, and sometimes the fairy. And it’s so popular.

I think it’s the hands. The (bunny fingers hopping gesture, bopping sound). It’s so great. Does that come in?
We retained that. There’s so much choreography. [Movement Director] Barney O’Hanlon is with SITI company, with Anne Bogarts company, who’s this amazing choreographer, who Les works with a lot. And he’s a beautiful choreographer, and it turns out, he did not know this, he’s a sort of a genius with kids. So, yes, there’s a ton of choreography, as there needs to be, and the kids are great. And yeah, you will find — fans of the original song will find — many of the gestures in a certain special highlighted section.

So, in that way, I think it’s a great thing to do. And I have to say, working on this show has been really a joy for all of us. Like we really, I mean, having 10 kids in the room has been great, it’s just kind of kept the level up in a certain way.

I mean, everyone has worked on it very seriously, but it’s also, it is very silly.  And it’s only 65 minutes long. Tech was kind of a breeze. So I’d love to do it again. But I don’t know. I mean, I didn’t mean to write a children’s musical. I think it’s a talent to be able to write for children, and I think I stumbled into a good children’s musical, and I don’t know if I could do it again if I tried. I will probably try at some point. I’d love to explore the Blue Fairy more. I’d love to find out more about the skink. Or whatever.

One of the things I always wanted to know as a kid, if it was the same Blue Fairy as the one in Pinocchio. That was kind of my obsession. I mean, she comes down, and she does things to people, and sometimes it’s good things, and sometimes it’s bad things.
That’s a really interesting question. I’m sure it is. Because that’s the first movie I ever saw as a child, and was terrified by. So I’m sure that Blue Fairy is in there somewhere. The donkey scene is horrifying. The whale? I mean that’s crazy. All those scenes are intense.

She’s like, ‘I’m gonna animate you, but you have to prove…’
She’s all about responsibility. I should look at that again. Don’t saying anything, Disney will come after me.

‘Washburn sued.’
I know that April [Mathis], the actress playing the Blue Fairy, normally plays deeply-experimental, weird worlds, is very, very, very, much enjoying playing every sort of Disney fairy and princess all at once. That’s very much how she’s conceiving of it, and it seems quite right.

I think everybody enjoys stepping outside, like they have a thing they normally do, but then they can step outside of that and do something different, and do it honestly, and it sounds like you just pulled at this thread ad followed it until it became a children’s musical.
It’s just a very old story. Do you do what you want, or do you do what  others need? And how do you balance that?