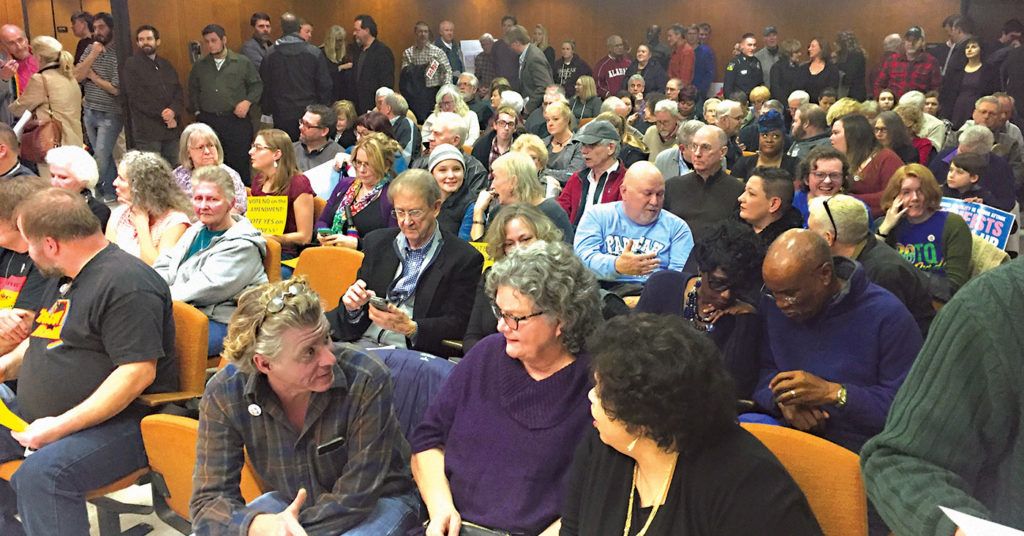 Paducahns were jubilant, in tears, cheering the city’s historic passage of a LGBTQ Fairness Ordinance earlier this month. It made the “Quilt City” of about 25,000 residents the ninth Kentucky community — and only Western Kentucky city — to update its civil rights law to include LGBTQ people.

Many thought they’d never see the day. It’s a sentiment I hear repeatedly as I work across Kentucky.

“I don’t think this conversation has been had at this level in our city since I moved home 10 years ago,” an animated Mayor Brandi Harless shared before the Paducah City Commission in December. “To be bold enough to say something out loud is a challenge … to have the courage, once you have been discriminated against, to come forward, is not an easy thing to do. And we’ve got to make it easy for them.”

Harless and Commissioner Sarah Stewart Holland — both in their mid-30s — led the city in a brief, dignified, impassioned debate that succinctly outlined the current lack of LGBTQ protections in both state and federal law and their desire to see Paducah lead the way on this seminal civil rights issue.

The conversation at Paducah City Hall was difficult, as it always is. More than 250 Paducahns on both sides of the issue crowded the chamber to overflowing, prompting the fire marshal to corral most folks to the fringes of two balcony doors, which were eventually shut. Supporters and opponents alike gathered near cell phones and blue tooth speakers in the hallway to stream the 45-minute debate happening a wall away. Outside, cheers on a 15-second delay would frequently fill the room.

Inside, the room was tense. Fairness supporters clung to neon yellow signs that read, “Vote No On The Amendment! Vote Yes On Fairness!” Opponents sat stoically. The image was undeniably reminiscent of early Fairness Campaign photos at Louisville Metro Hall.

At the previous city commission meeting — where commissioners were first expected to vote on the issue — Commissioner Richard Abraham temporarily derailed the process by introducing a “License to Discriminate” amendment, which would give business owners a broad religious exemption to LGBTQ protections. His move pushed the vote back several weeks to early January.

These amendments have now become an all-too-familiar tactic of the opposition to gut or impede LGBTQ discrimination protections across the nation. In Kentucky, “License to Discriminate” bills have frequently been proposed in the General Assembly to undermine Fairness Ordinances where they currently exist. Fortunately, the threat of costly economic consequences — a la North Carolina — has kept them thus far at bay.

Yet, the prospect of a religious exemption in Paducah was enough to organize a fervent opposition from people, who pleaded with Harless and the City Commission not to infringe upon their religious rights from talking points sheets prepared by the Commonwealth Policy Center, a conservative think tank.

Harless and the commissioners were unfazed. “We have to do this because protection is our job,” she said.

“Of course it’s hard, what’s hard is what makes it good,” Commissioner Holland quoted A League of Their Own to the crowd as she ended a passionate speech. “We are strong enough to discuss what our values mean and how we want to exercise them and respect and love each other no matter how that discussion ends up.”

These Kentucky communities that are having frank conversations around LGBTQ issues should serve as the model for every other city and county in our state and General Assembly. There, a Statewide Fairness Law has been proposed every year for nearly two decades, with little action. While we made history with two public hearings in 2015 and 2016, the measure has never received a vote. Both State Sen. Morgan McGarvey and State Rep. Mary Lou Marzian plan to file a Statewide Fairness Law again this year, but it’s likely we’ll spend most of our time in the 2018 legislative session thwarting new efforts to restrict LGBTQ rights.

All across Kentucky, it seems the true act of bravery isn’t necessarily passing a Fairness Ordinance, it’s just discussing one. Even in communities where the measure has failed — like Berea or Bowling Green — it has inspired a long-overdue conversation, just like Harless said.

It’s high time our whole Commonwealth had this conversation.

I invite everyone to join us in Frankfort at the Capitol on Wednesday, Feb. 21 for the Statewide Fairness Rally with the ACLU of Kentucky, Fairness Campaign, Kentucky Commission on Human Rights, Lexington Fairness and more to call on state leaders to finally discuss LGBTQ rights and make Kentucky a state of fairness.

Registration and more information can be found at Fairness.org. •