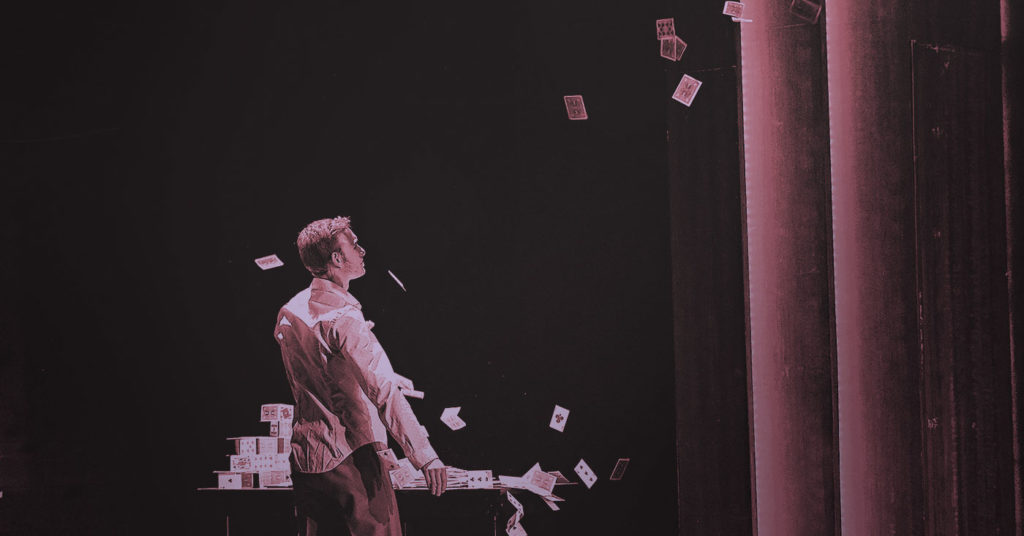 Brett Schneider in ‘The Magic Play.’ Photo by Bill Brymer

The Magician, the character at the center of “The Magic Play,” which opened last weekend at Actors Theatre of Louisville, is a master of sleight in all its forms. He has the hands, the patter, the steel-trap focus — and the ability to appear utterly without guile or cunning — that distinguish an elite, magical genius from other high-level professionals in the field.

It turns out that those same traits have also enabled him to master sleight-of-heart — and this is a man who believes that earning and maintaining love is a kind of trick — as if relationships were something one pulls out a hat. His urgent need to construct and control an illusory reality stems from a childhood that was shattered when his father — Another Magician (Jack Bronis) — abandoned the family.

And when his love, an Olympics-class Diver (Jon Hudson Odom) uncovers the illusion, The Magician’s routines turn into a powerful and richly-expressive exploration of the nature of trust and love.

“The Magic Play” is a unique piece of theater that reflects years of collaboration among the playwright, Andrew Hindraker, Director Halena Kays, Schneider (a professional magician, as well as an actor) and magic consultant Jim Steimeyer, an author and illusionist who has worked with nearly every prominent magician in the field.

If the play were merely a showcase for magic, it would be a fun night of theater. And it has all the trappings of a great magic show, including the authentic use of volunteers from the audience (if you sit on the main floor, make sure whomever you’re with brings along their smartphone to take photos in case you get called to the stage to assist).

And if there were no magic, the play would still be a fine piece of work. It is thought-provoking and emotionally involving, and the three cast members deliver it with grace and tenderness — and the splendid set (Lizzie Bracken) and other technical aspects (including some technological magic) are outstanding.

But, in fact, it is both a magic show and a play. This is the third run of the play — and it feels like a bespoke production especially designed around Schneider’s unusual blend of magical and dramatic talents. It’s the sort of experience that won’t be easily replicated by a plethora of theaters. Indeed, the use of random volunteers — especially in the closing scene, which was deeply powerful at the Sunday night performance I saw — means that each performance plays out in a unique and unpredictable way.

It’s rare to witness something like this. My advice is to see it while you have the opportunity.

If you follow my advice, you’ll be seeing a lot of theater over the next couple of weeks. Two other very fine productions opened last weekend.

This is a topical, hyper-local play that explores the brutal world of human trafficking on the streets of Louisville through the eyes of a couple of young, idealistic outreach volunteers who try to help victims of trafficking get away from the street.

It’s a remarkable piece of theater, with eloquent performances from Hilsermarys Jo Valor as Molly, Judith Gonzalez L. as her colleague Cari, and Padilla as their supervisor, who struggles to navigate the challenging boundaries between the aspirations of the young idealists and the laws and regulations that impede attempts to help victims of trafficking.

This is a play set on the actual streets of Louisville — and the set includes remarkable videography (by Julio Samoya) that is projected on a backdrop and allows us to follow Molly and Cari as they drive through the city — the Watterson Expressway, Ormsby Avenue, the MacDonald’s on East Market Street and the downtown hospital district.

This is a gritty, powerful play that will leave you thinking in a different way about our city. And it may cause you to wonder why we use a sterile, technical term like “human trafficking” as the label for such a cruel and devastating thing.

This is a phenomenal production of a contemporary masterpiece by one of America’s most innovative playwrights. Ruhl’s imaginative reinvention of the myth of Eurydice and Orpheus is a complex, multidimensional work that mingles visual puns, elaborately musical language and evocative choreography, and it is demanding in terms of acting and technical stagecraft. This production brings everything together with luminous clarity.

And the actors — Mia Donata Rocchio in the title role, Terry Tocantins as her father, Xavier Harris as Orpheus, and Zach Stone as the Lord of the Underworld — are terrific. They are fully in command of the linguistic rhythms (Rachel Hillmer is credited as vocal director), the psychology and ideas of this play. And everyone, including the ominous underworld stones (Adama Abramson, Bridget Thesing, LaShondra Hood, Brittany Patillo, Bailey Story and Manuel Viveros), brings a firm conviction to every moment.

This impressive production is part of an entire season of plays written by women. In a few weeks, Feb. 23, the Department opens “Fabulation: Or the Re-Education of Undine,” by another of the great playwrights of our time, Lynn Nottage. This is a season that deserves attention. •