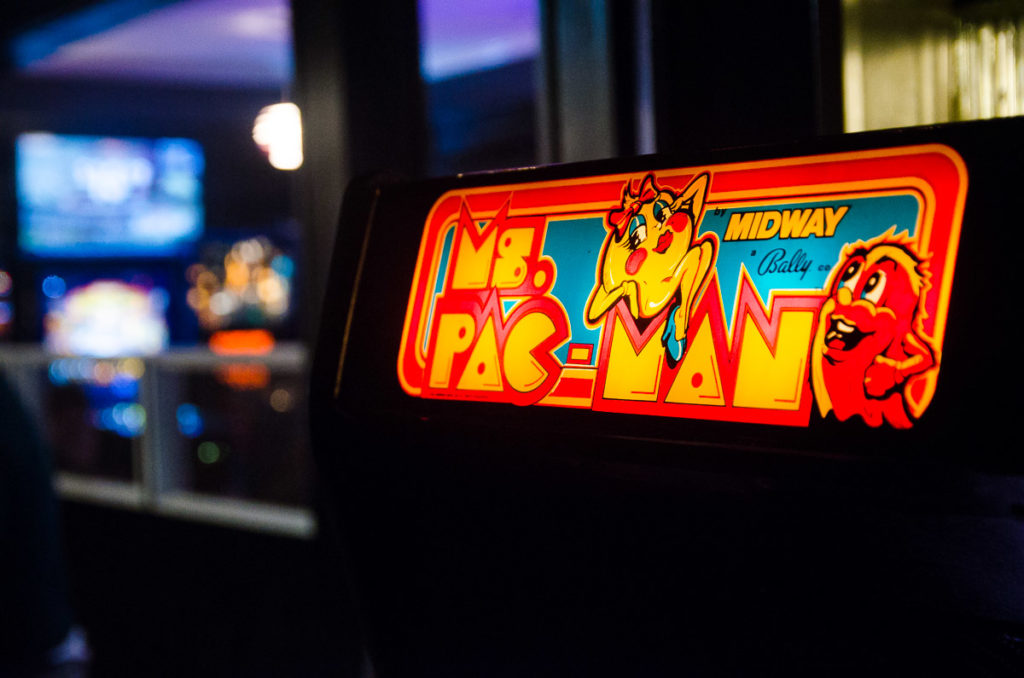 Whether you’re on a date, meeting up with friends or looking for something to do on the weekend, bars with games are the way to go. These pick-up-and-play style games give everyone a chance to participate, and the friendly competition they provide always injects energy into the night (especially those booze-induced lulls). Luckily for us, Louisville has quite the selection of bars with games. There are the bars with vintage arcade machines that require coins to play, and more bars with home consoles rigged for multiplayer games. And some combine the best of both worlds. With so many choices, we decided to put together this list (in no particular order) to help you find the bar that fits your style of gaming best. If you have other suggestions, let us know.

RecBar
Arcade  |  Pinball  |  Rec room games
$ to play
RecBar is a gaming paradise. The bar has over 70 games, including nearly 50 arcade machines, 30 pinball machines, seven rec room games and, of course, Mario Kart 64. Some LEO favorites are the four-player Simpsons game, the four-player Teenage Mutant Ninja Turtles game, NBA Jam, the six-player X-Men, Carnevil and the Nintendo Playchoice. And the bar isn’t too shabby either, with a rotating tap of 16 beers, over 50 bottles and cans and over 100 bourbons and whiskeys. The grub is solid as well, as LEO can attest to, with geek-themed food items like “Napoleon’s Totchos.” But as with all things in life, there is a catch. All of the machines operate on tokens (1 token = 25 cents) with the majority of games requiring one token to play, and a few requiring two. But compared to other gaming venues (think Dave & Buster’s), that’s pretty cheap. The arcade is open to all ages until 10 p.m., after which it is 21 and over.

Butchertown Pizza Hall
Arcade  |  Rec room games
$ to play
Few pairings are better than pizza and video games, and you can find them both at Butchertown Pizza Hall. The fast-casual joint has a mini shuffleboard and a number of arcade machines, including “Trophy Hunter,” “Silver Strike Bowling,” “Mortal Kombat II,” “NBA Jam,” “Ms. Pac Man,” “Donkey Kong” and “Area 51.” And as far as the pizza goes, LEO’s food critic Robin Garr approves and the restaurant says the pizza is made from an “insanely good pizza recipe that was developed after tasting and trying multiple flours, many cheeses, and literally 40 different types of tomatoes.”

The Hideaway Saloon
Console  |  Bar games
Free to play
The Hideaway Saloon bills itself as “The Gaming Bar of the Highlands!” and with good reason. The saloon is dedicated to console gaming with a system catalog that includes: Nintendo 64, GameCube, Wii U, PlayStation 3, PlayStation 4 and Xbox One. The games tend to lean toward multiplayer (think “Rocket League” or “Mortal Kombat X”). But there are a few solo, first-person shooters available. And for Mario fans, the bar has “Mario Kart” for the 64, Gamecube and Wii U, as well as Mario Party for the 64 (I,II and III) and GameCube.

Zanzabar
Arcade  |  Pinball
$ to play
Zanzabar, better known as a music venue, also happens to house one of the city’s largest collection of vintage arcade and pinball machines (LEO’s quick guide to pinball in Louisville). A collection so large, the selection of available machines rotates regularly to keep things fresh. The ratio of arcade to pinball machines, usually, is about five arcade machines to 15 pinball machines. Currently, only Galaga, Ms. Pac Man and Robotron are available, but depending on when you are reading this it could have changed. So if you want to know exactly what’s available, call or email ahead. Or, just make Zanzabar a regular stop on your gaming expeditions.

Kaiju
Console  |  Bar games
Free to play
Kaiju is a weird, giant-monster themed bar in the heart of Germantown. Known for hosting a wide range of musical acts and a number of comedy shows, it also happens to be a sweet spot for gaming. Not only does it host regular board game nights (read more on that in LEO’s guide to board game nights and tournaments in Louisville), it also has consoles including PlayStation 2 and 3, GameCube, Nintendo 64 and Super Nintendo. The Super Nintendo offers a variety of games, while the GameCube and N64 have preselected games (usually “Super Smash Bros.” or other party style games) and the Playstations have a stack of games to choose from. The setup can seem a bit haphazard, with seating becoming scarce on busy nights, but at a punk bar like Kaiju, it just feels appropriate. The bar also offers free pool, and happy hour is every day from 4-7 p.m.

Tavern on Fourth
Arcade  |  Rec room games  |  Bar games
$ to play
While most of the bars are more focused on digital gaming, Tavern on Fourth takes another approach. Describing itself as more of a traditional sports tavern with a mix of interactive games. It once had a better selection of arcade machines, including an NES cabinet with Tecmo Bowl, Super Mario Bros. 3 and Contra, but the options have faded a bit. There is Big Buck Hunter, a sit-in-the-car racing game and the shooter Time Crisis, making it less than ideal if you’re looking to spend a bunch of time playing arcade games. They do, however, have Mario Kart 64 on a large projector, which is free, and definitely makes it worth stopping by if you’re in Fourth Street Live. The Tavern seems to be focusing more on things like pool, corn hole, bocce ball, giant Jenga, beer pong and shuffleboard, and they have a great space for it. But don’t go if you’re looking to spend a lot of time playing video games.

Hilltop Tavern
Arcade  |  Rec room games
$ to play
Hilltop Tavern is an oddity in the best way possible. It feels like a neighborhood bar, but one decorated by nerdy artists, and it also happens to serve surprisingly good pub grub with a solid selection of craft beer. On top of that, it also has plenty of gaming options to keep you entertained well into the night. There is a huge collection of board games in the back, a foosball table, giant Jenga, giant Connect Four and, best of all, two arcade systems with over 2,000 game titles. Admittedly, it can be a bit of a slog to scroll through the games to find the one you’re looking for, but if you’re like me, certain games are worth it (“Aliens vs. Predator” 4 Life!). And with each machine only costing one quarter to play, you still afford plenty of beer afterward.

Magnolia Bar (aka Mag Bar)
Arcade  |  Bar games
$ to play
Magnolia Bar, better known as Mag Bar around town, has been around since 1962 and bills itself as “Old Louisville’s best neighborhood, dive bar.” That is hard to argue with when you look at the amount of live music hosted there and its collection of classic arcade games. Tucked away in the back of the concert area you will find “Battletoads,” “Metal Slug X,” “Street Fighter II” and “Magic Sword.” It’s only a quarter to play each machine, and the bar plans on adding even more games in the future. The bar also has darts in the front area and hosts weekly drink specials and happy hour specials that include $2 domestics and $2.50 well drinks.