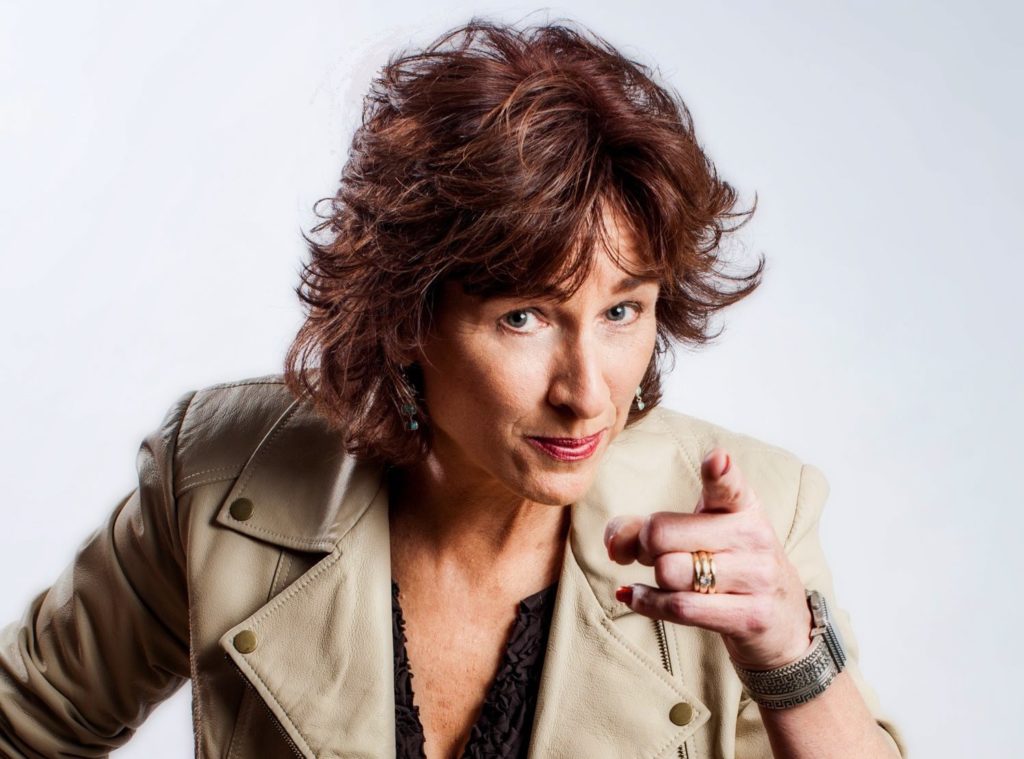 Comedian Julie Scoggins is a motorcycle-loving, former long-haul truck-driving, Southerner. Raised in Charlotte, North Carolina, Scoggins bounced around a lot of her life: a sales rep for Frito-Lay, and then living with her husband on a boat in St. Thomas, Virgin Islands. After moving back to the states, Scoggins tried stand-up comedy for the first time at 37. Twenty years later, she’s still on the road, headlining clubs all over the country. This week, Scoggins headlines in Louisville for the first time.

LEO: You came late to comedy. What was the hold up?

Julie Scoggins: That’s a good question, but I don’t know. I think things happen when they’re supposed to. You do things when you feel drawn to do them. Starting when I did, I feel like I had life experience to draw from. It gave me more breadth of subject matter right out of the gate.

So did you stand out from your peers right away?

Put it this way, I used to teach a stand-up class. You have these 20 year olds in there and they would all talk about the exact same things — whacking off, or whatever 20 year olds talk about. It wasn’t that they weren’t good or creative. Their world is just so small at 20 years old. That’s the scope of their awareness. That’s all they know. You need to have some crap jobs, some shit relationships or just life experience. And then you can come to a room full of strangers and meet them where they are, because you’ve been there, too.

This is your first time headlining here. Will you celebrate with some bourbon?

I’m not a big liquor drinker, to be honest with you. I guess I’ll have to try it, but I prefer a glass of wine. That’s what women over 50 drink. We think because the glass has a stem on it, it makes us look like less of an alcoholic. And I’ll tell you, I’m on the older end of the comedy spectrum. By the time you get to my age, you don’t stay out and drink as late as you used to. You’re like: ‘All right, I really don’t wanna wake up and feel like crap tomorrow.’ At my age, my body does that for me. I don’t need alcohol’s help. Plus, I’ve been married 28 years. I’m not trying to get laid. That’s the only reason I can think of to stay out all night and drink.

Twenty eight years is a long time to be married.

Well, it helps that I’m out of town three days a week. When I come to Louisville, I’ll be gone three nights. And that’s just enough time for him to forget about all the crap I do that pisses him off. It’s perfect.

You and your husband used to live on a boat in St. Thomas. What was that like?

It changed my perspective a lot. I found out what it was like to be a minority. As a white girl growing up in North Carolina, you feel so removed from racism and slavery and stuff. I was like: ‘That wasn’t me, or my parents, or whatever. Why are we still debating racism?’ It’s 10 percent white in St. Thomas. Go somewhere else and be the minority — things start to make a lot more sense. I was discriminated against all of the time just because I was white. To try and get anything done in a bank, or get your vehicle inspected, or get your driver’s license. Anything that required service, we got treated like dirt. If you get pulled over down there, white people will get a ticket. That isn’t even a question. So it really opened my eyes on what it must be like to be a minority in America.

After that experience and conversations with people all across the country, do you think America is about to implode?

Here’s the secret: People are assholes. They always have and always will treat one another like assholes. So sure it looks bad. It looks like things are about to implode. But we’ve been here before. If you look back through history at all the shit that has happened, politically speaking, and if you look at the era when that shit happened — I’m sure people were just as upset, just as disappointed and just as unhappy as we are now. But we survived and we learned. And I know sometimes it doesn’t seem like we’re learning. But we are, because we’ve made it through this before.