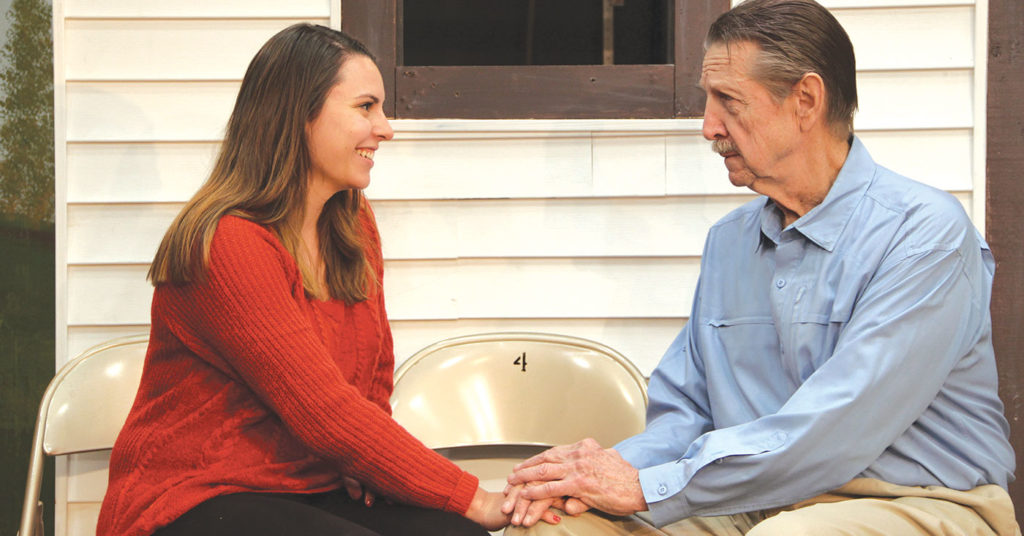 In the Little Colonel Players' ‘The Honey Harvest,’ Megan Kubac as Mel and John Lina as Pop.

“There’s no sentimentality in nature.”

So says Ed Shoola (played by Michael McCollum) in Liz Fentress’ play, “The Honey Harvest,” which just completed a run in a Little Colonel Players production directed by Alyssa Hendricks.

Shoola is an expert beekeeper — and though he sees no sentiment in nature, he is alive to the natural beauty of bees and the many ways they’ve inspired human philosophy and poetry. And his conversations with novice beekeeper Melissa (Megan Kubac) are one of the delights of Fentress’ smart, sensitive script.

At one point, he cites Virgil: “Honey — born on the wings of heaven, gift of the high gods. His engaging mini-lectures touch on etymology, biology and mythology. And they add an unusual and appealing tone and texture to this sweet little drama.

The focus of the story is Melissa, who has left college and given up a scholarship to return home and assist her father, John (John Lina). A former engineer, John has just completed a round of shock treatments. He’s at risk of another hospitalization and Melissa’s idea is that if she can get him engaged in beekeeping, he may have a sustained recovery.

Melissa’s plans are complicated by the romantic designs (and anti-bee notions) of former schoolmate, PJ (Andy Szuran). PJ may be smitten (and he is certainly stung), but he also represents everything Melissa wants to escape from in her life.

Fentress masterfully weaves her father-daughter story across the entire beekeeping season, from the day the bees arrive in the mail (along with all the related equipment) to the day of the final harvest.

The Little Colonel Playhouse is a perfect setting for this sort of play. It’s an intimate space — and I for one appreciate the opportunity to see a play begin with the opening of an actual curtain, a thing that has become extremely rare at Louisville theaters.

Director Alyssa Rae Hendricks (who also partnered with Bill Baker to design the set) elicited fine performances from her cast of four.

The characters of the two older men were written with hefty doses of gravitas and authority — and both reveled in the roles. John Lina was mostly a disheveled mass of quiet anxieties and humble confusions. But let him glimpse a blueprint, or ask him about, say, the ecology of white pines, and his voice would rise up with perceptive epiphanies. McCollum’s beekeeper may have been methodical and matter-of-fact — but he, too could revel in Fentress’ language.

As Melissa, Kubac’s relationships with the two older men were differentiated and well-honed. And although Fentress’ stereotypical depiction of PJ is the play’s weakest feature, even in that relationship, the two actors forged a bond.

“The Trojan Women” by Euripides, at the Commonwealth Theatre Center.

The moral world of the Greek tragedies is at once familiar and alien to us. We may know of the names and stories of characters like Medea, or Oedipus, or Helen of Troy. But our very familiarity with the outlines of the myths gives us a false sense that we understand the world of the plays.

In fact, the 33 remaining plays produced by the great Greek tragedians — Euripides, Sophocles and Aeschylus — come from an alien world. They have become part of European tradition — but they were written well before Judeo and Judeo-Christian ideas began to penetrate into Europe. And their reintroduction into Western culture during the Renaissance created philosophical and moral countercurrents that continue to shape our modern world.

We live in a moment when xenophobia is a malignant force in our politics. It is shaping our response — and many other countries’— to an ongoing human disaster. There can be no better time to see Euripides’ “The Trojan Women.”

It’s set in the immediate brutal aftermath of the Trojan War. It’s a catastrophe wrought by warring men — who will blame their actions on a woman, Helen of Troy. And the inevitable victims of the war are the women of Troy, who are doomed to rape and enslavement.

Some historians view “The Trojan Women” as a harsh critique of an incident in which Athenian forces slaughter the citizens of a city they conquer during the Peloponnesian War. But regardless of what motivated Euripides, the play is a powerful look at the consequences of war.

This is the second Commonwealth Theatre Centre production of the season to be influenced by Greek tragedy. In December, CTC mounted an impressive production of “The Comedy of Oedipus,” a rarely seen satirical adaptation of the Oedipus story by the Egyptian playwright Ali Salem.  So there is a bit of a theme underway — and it’s a theme worth supporting. •

On other Louisville-area stages:

‘The Magic Play’
Through Feb. 11
Actors Theatre of Louisville
actorstheatre.org