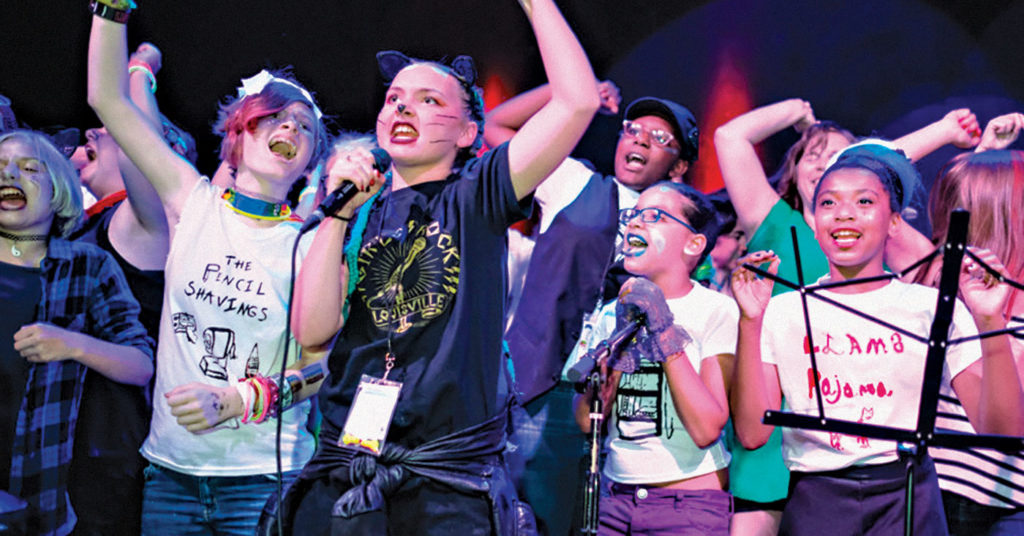 Girls Rock Louisville is a collective of musicians, instructors and volunteers dedicated to teaching girls and trans and gender-nonconforming youth how to rock through a week-long summer camp. In a broader sense, the word “rock” implies freedom of self-expression, energy and confidence — where music is the means of empowerment. That is the mission of Girls Rock Louisville.

As part of the International Girls Rock Camp Alliance, GRL is new among the other 80-plus camps across globe, but the community impact resonates year-round. A big part of that is an all-inclusive emphasis, as well as showcasing all of the bands formed each year with a live concert and a compilation album, which will be available Sunday at Guestroom Records for the official CD release party.

The camp goes beyond teaching how to write, perform and record music to “introducing them to intersectional feminism, approaches to wellness and self-care, and learning how they can claim their own power,” said Carrie Neumayer, executive director and founder of Girls Rock Louisville (who also plays guitar in Second Story Man and guitar/vocal duties in Julie of the Wolves). “We discourage competition and isolation and encourage our campers to build each other up, rather than putting each other down.”

A few days after their first concert, the campers head over to La La Land studio to record their chosen songs for the album. This past summer formed the nine bands included on the CD and the result is as exuberant as you’d expect.

“Each band’s coach and band manager help the campers through the strange experience of hearing themselves and each other through headphones, while playing their song in the tracking room for the first time,” said Neumayer. “The band Star Kats sampled an actual kitten meowing to include in their song. I crack up every time I hear it.”

The official release party is Sunday, Jan. 14 at Guestroom Records from 11:30 a.m. to 2:30 p.m. Visit girlsrocklouisville.org to learn more about getting involved.