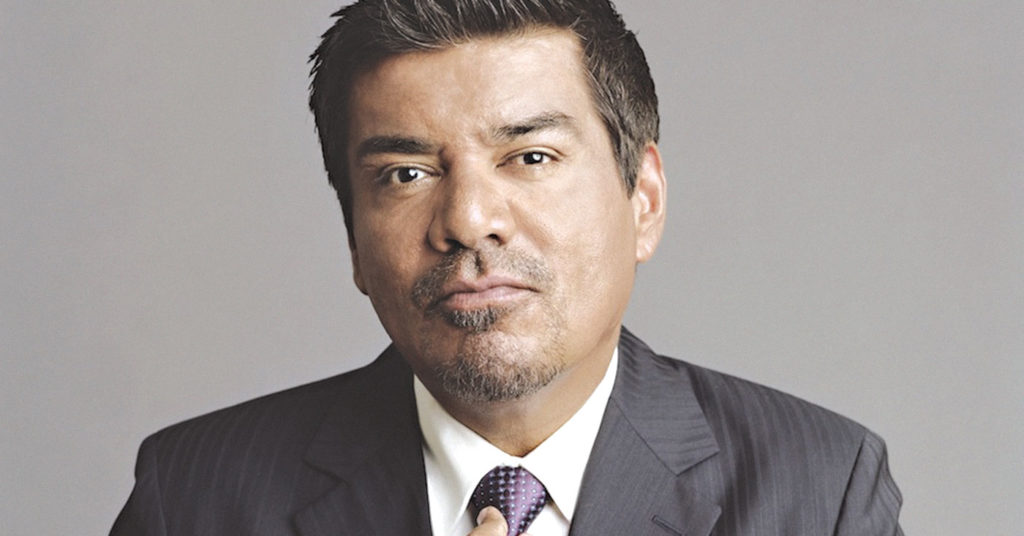 After a visit to Louisville recently to film a movie, comedian George Lopez compared the city to an M&M. That has to be a first. “An icy, candy-covered layer on everything. All the vans did, all the signs did. It was crazy,” he recalled. Lopez is one of “The Original Latin Kings of Comedy” and star of the hit ABC sitcom “George Lopez” for six seasons. Lopez voiced the characters in “Beverly Hills Chihuahua,” “The Smurfs” and “Rio.” This weekend, he returns to The Louisville Palace with his old friend Cedric the Entertainer.

LEO: You will be coming with Cedric the Entertainer. How long have you known each other?
George Lopez: We’ve known each other probably 20 years. But this all came about in 2013. I was raising money for the completion of Richard Pryor’s statue in Peoria, Illinois. I decided I would call all the guys that I wanted to work with who I never saw much. Guys like D.L. Hughley, Charlie Murphy, Cedric and Eddie Griffin — and we did a show. It was so much fun we’ve been touring arenas together since. And then once in a while Cedric and I will slip off and do these smaller gigs, like what we’re doing in Louisville.

You mentioned Richard Pryor. Clearly, he’s important to you as a comedian.
Well [laughs], I believe in Richard Pryor’s humor. I believe that any comedian who has any sort of self-reflection in their comedy are seeds from the Richard Pryor tree. Clearly guys like Eddie Murphy, Chris Rock and Chapelle. And to me, personally, he was hugely influential in regards to what I do on stage.

Do you think you’ll ever retire from the road?
I like the road. Think about it like this: You’re a comedian, you’re married, you have a couple of kids. You go on the road, you’re in a nice hotel, there are no kids and people bring you food. You can send your clothes out, and they come back clean. Who wouldn’t love that? You do have to get off the road every now and then. Because the road keeps going, it goes on without you. So trying keep up with that just won’t work.

Recently you spent time in Louisville filming ‘River Runs Red.’ Did you like the town?
I loved it. I ate at Jeff Ruby’s a couple of times. The food and the staff there were great. I also got to go to a basketball game while I was there, and UofL won. But man, the two weeks I was there and those 10-degree nights while we were filming were tough. You know that thin layer of candy an M&M has around the chocolate?

Sure.
The whole city had that, but in ice. An icy, candy covered layer on everything. All the vans did, all the signs did, it was crazy.

Tell me a little about the movie.
The director Wes Miller wrote a story about everything that’s happening in the country with police. I’m not trying in any way to demonize police as a whole, but there has been a rash of violence against a lot of people that were not guilty, and also not white. So the movie will be eye-opening. It doesn’t take one side or the other, really. It doesn’t tell you who is right and who is wrong. It makes everyone make their own decision. It’s difficult for a police officer — it’s frightening for them. But it’s also frightening to be a civilian, right now. This movie addresses that.

Also relevant right now. Your film ‘Spare Parts’ is the true story of two undocumented Mexican-American teenagers who built an underwater robot. Am I right that Oscar and Cristian are the exact kids who Deferred Action for Childhood Arrivals is here to protect?
Absolutely. There is no simple answer, so I’m not going to try and give an answer. But both of those kids have wonderful, brilliant minds that would be valuable to any company anywhere. But the companies can’t take a risk on hiring them. These kids are geniuses and one can’t find a job, and the other is working as a caterer. These are people who can add to a country, not take away.

When you look into the future of George Lopez, what do you see?
I’ve been blessed to do what I love since I was 11 years old. No one should work hard their whole life without a little glory at the end. So I see a beach. I see smoke coming from the tip of a cigar. And I see a lovely golden-brown tan. And when I’m sitting on that beach, I’ll remember that 10-degree weather in Louisville. •