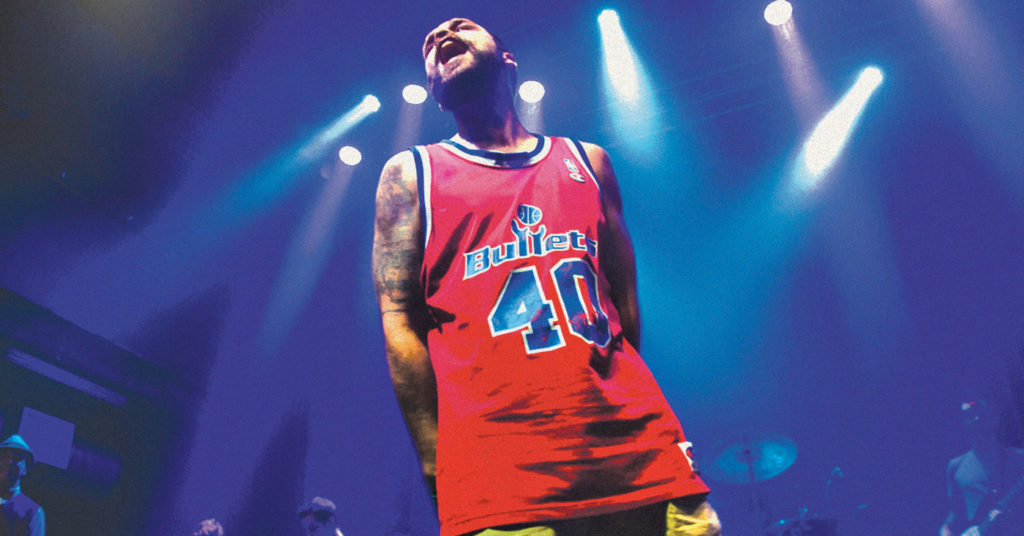 Roman Aprile, otherwise known as Dr. Dundiff, spent 2017 quietly building a catalogue of beats, planning the four new albums he’s set to drop in 2018 — two instrumental works and two new joint albums with collaborators Touch AC and Otis Junior. His studio, a small office space just off the master bedroom in his apartment, is a gearhead’s dream, with a drum set and organs, as well as a variety of beat and noisemakers positioned throughout the room. It’s here that he concocts his beats, churning out at least one a day — he creates, and often throws them away, for exercise.

Dundiff has developed a deep and meaningful relationship with the hip-hop community as a collaborator and a staple, showcasing that especially during the Dr. Dundiff & Friends shows, which most notably landed on the Ocean stage at Forecastle, bringing together Rmllw2llz, Jack Harlow, Kogan Dumb, Skyscraper Stereo, James Linsey, 1200 and Jim James. It also resulted in a full-length record. We caught up with Dundiff to talk about his four new projects, mapping out what you can expect from each.

Muneybeats sees Dundiff mining the melancholic satire of “The Office,” a show that he revisits often, to simultaneously poke fun at and revere the 9-to-5 grind. For example, lead single “No One Likes Beats,” uses a line by Office manager Michael Scott, where he belittles his right-hand curmudgeon Dwight Schrute’s beet farm, saying, ‘No one likes beets. Why don’t you grow something everyone does like? You should grow candy.” Featuring 18 tracks, the album never falls into dull territory, with its relaxed vibe that’s part funk, part soul and all hip-hop verve.

“I always thought I was crazy to have ‘The Office’ on all the time, but I came to realize that a ton of people do this stuff,” Dundiff says. “I don’t want to give you the idea that I was making an ‘Office’-themed tape, but I wanted to go with a theme that worked together. It’s not an emotionally attached project, you can just appreciate it.”

This is his first album since his beloved sampler broke, a classic Akai MPC 2000xl. Dundiff picked up a newer model MPC, the 3000, along the way — the same machine used by one of his musical inspirations, J Dilla.

“I like learning samplers, so I learned it real quick,” he said. “All my bass sounds are better, my drums slap a little more. I love it, it’s awesome.”

Death
Release Date: April 21
Dundiff is once again teaming up with emcee Touch AC on the grimly titled Death, a follow-up to the duo’s previous release, the Page of Cups EP. It was composed approximately one year ago, the last with his old MPC sampler. Dundiff worked to mirror Touch’s vision, a life-and-death journey chronicling dark times for the emcee.

“Touch has had a rough year,” Dundiff said. “He’s such a great guy. It hurts me the same. But he’s out of the slump. This album is really him going on some emotional shit. It’s a good journey.  This is the last album I made on that, the MPC. To me it’s the death of that thing, that MPC. I had to put that down and learn something else.”

Cool
Release Date: Summer 2018
The follow up to Hemispheres, Cool is a collaboration between Dundiff and Otis Junior. A bouncy and fun album that balances the good vibes of a party atmosphere and the sultry ruminations of Otis Junior, Cool is a nice summer album.

“Bright, windows down — I use those terms a lot,” Dundiff said. “Winter album, summer album. The idea of the way the music makes you feel immediately in a mood. You can see sunshine in the back of your eyelids.”

The Distance
Release Date: Winter 2018
Last up is The Distance, another solo album, with plans to feature guest spots from local emcees. Emphasizing jazz and keeping it loose, he hopes to set a tone reflected in the music — casual, but with a broader undercurrent if you dig a little deeper.