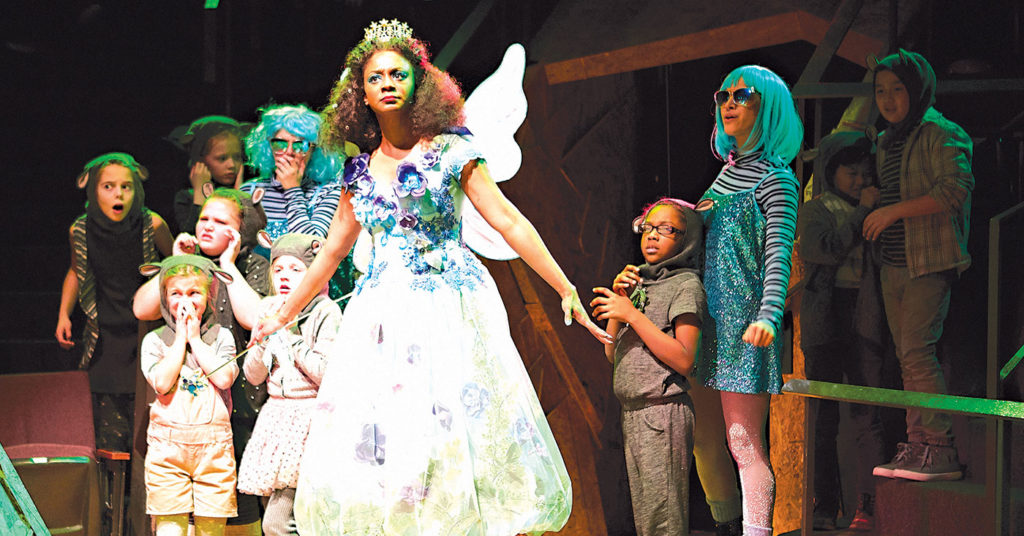 From ‘Little Bunny Foo Foo,’ April Mathis as the Blue Fairy, surrounded by the Field Mice. Photo by Bill Brymer

As much as I love live theater, once the curtain calls are over I’m usually in the first crush of people heading for the door.

But what I wanted after seeing Actors Theatre of Louisville’s world premiere production of Anne Washburn’s “Little Bunny Foo” was to stay in my seat forever, wrapped in the sweet, wonder-filled, compassionate universe she had magically built from the bones of a kid’s song about a misbehaving rabbit with the bad habit of bopping field mice on their heads.

This “Little Bunny Foo Foo,” staged in-the-round in the Bingham Theatre, doesn’t feel like a play — as an object we observe as bystanders. Instead, it plunges you into the pure act of play itself.

But mostly, the joyful nature of this production stems from performances that don’t seem like performances. During his tenure at Actors (which comes to a close at the end of this season), Director Les Waters has often seemed more a releaser than a director (think back to the unleashed chaotic scenes in “Glory of the World,” Charles Mee’s brilliant, if controversial, play about the complicated legacy of Thomas Merton).

Here, there can be no controversy: ‘Bunny Foo Foo,’ after all, may be loved, but is not revered. But the performances have the same sort of unleashed quality.

The Field Mice in this production are played with exuberant glee by 10 energetic, focused youngsters. Sam Breslin Wright is a high-spirited Bunny whose bent for bopping puts him on a collision course with the authoritarian Blue Fairy (April Matthis), who has firmly forbidden said bopping. Riding a crest of populist support (even the boppees love their bopper), Foo Foo goes rogue. His punishment leaves the lurking Catmonster (Bear Brummel) free to have his way with the mice.

But the romantic-rebellious relationship between the Bunny and the Fairy (beautifully articulated in song) opens a hopeful path to reconciliation and a happy ending.

Adults might find adult themes in this play, because that’s what grown-ups do (one scholar famously claimed that L. Frank Baum’s “Wizard of Oz” was a political allegory about the gold standard…). But my advice is to escape into this world. And you’ll not likely find a play better suited to delight children. Discounted tickets are available for children under 14; there’s a Teen Night scheduled for Jan. 19; and on Feb. 4, there’s a sensory-friendly performance with reduced volume levels, gentler lighting and freedom for audience members to move about the theater. •

The world of Chad Beguelin’s play “Harbor,” which had its Louisville premiere by Pandora Productions last week, is a darker — but no less fascinating — place. And this production, directed by Michael J. Drury, is breathtakingly good.

The action is set in the gracious Sag Harbor home (designed by Eric Allgeier) of a prosperous, cultured, gay couple. Ted (David Galloway) is a successful architect. Kevin (Jacob Cooper) is a writer — or more precisely an aspiring writer, whose novel is going on 10 years and who struggles to write a PR blurb about the local community.

If Kevin has escaped his “poor white Christmas trash” roots, Donna has proudly retained hers. When her van arrives at “Fag Harbor” she mocks her newly-married brother’s hyphenated name and pretty much everything else about his life and lifestyle.

The fireworks between the urbane couple, the fiery van dweller and her smart, literate daughter (who reads literary classics because they’re only a quarter at thrift stores), are brilliant, bracing and abrasive — and this virtuoso cast is perfectly honed. Argo spews callous insults with unnerving courage — and Durs, a freshman at YPAS, but a veteran of several Commonwealth Theatre productions, gives a powerful, nuanced performance in a demanding, heart-wrenching role.

It turns out Donna’s apparently spontaneous visit is actually motivated by a hidden agenda. She’s pregnant and is set on persuading the couple to adopt the newborn. That plan drives a wedge between Ted and Kevin. This is a smart production that is as smart and scrappy, outrageously funny and emotionally courageous. •

On other Louisville-area stages:

‘Driving Miss Daisy’
Through Jan. 21
CenterStage at the J
jewishlouisville.org/the-j/centerstage