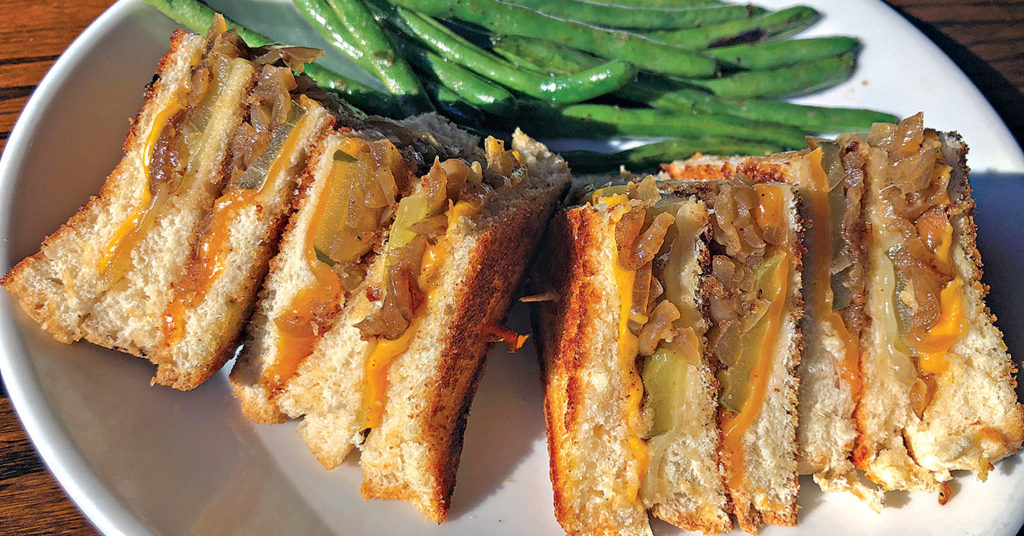 When hunger and cabin fever set in, though, and the urge to get out in the world becomes irresistible, I can hardly think of a better cold-weather destination than the friendly confines of a cozy bar and grill that takes its commitment to good food as seriously as it does to good beverages.

This week we ventured out twice for warming lunches. One trip took us to Old Louisville Tavern, a longtime landmark made new again. The second expedition led to bar Vetti in the 800 Building, one of the city’s newest watering holes.

Old Louisville Tavern, a 70-year-old neighborhood institution at Fourth Street and Gaulbert Avenue, just north of the UofL campus, was struck by a serial arsonist one summer night in 2014. A trash fire behind the tavern spread to its roof and did heavy damage.

It took almost two years to restore it, but the refinished building may be better than ever and that goes double for the food. Co-owner Dan Borsch, who also runs Burger Boy and Toonerville Deli/Old Louisville Pizza in Old Louisville, brings a similar focus on quality fare to all his properties. The Tavern’s menu features pub grub, to be sure, but it’s pub grub with a difference: comfort-food dishes at a level that wouldn’t be out of place in fancier quarters.

The restored Tavern isn’t fancy, but it’s neat and clean, with polished terrazzo floors, sturdy wooden tables and a hefty plank bench that lines one side of the room opposite the long bar. We chose a seat near the front windows and enjoyed the warming pleasure of a bright sun spot.

The menu is appealing, extensive and fairly priced. It features a dozen sandwiches, nine burger treatments, seven hearty entrées and a stack of pub-grub starters. Most of the sandwiches are under $10, and only one or two items on the menu — a chicken-bacon Alfredo and steak frites — barely crack the $15 ceiling.

A basket of beer-battered onion rings ($6) got us started. A generous portion of thick, golden-brown rings came out sizzling hot. They were a little greasy, in a good bar-food way, and a hint of cayenne gave them a pleasant kick.

A double-decker grilled cheese sandwich ($7.99) was attractively quartered and skewered in a neat row. A molten mix of cheddar, American and provolone cheeses was slathered with sweet, caramelized onions, pickle chips and crispy bacon. A side order of green beans was grilled crisp and bright.

The “Best Beer-Battered cod sandwich” ($11.49) lived up to its moniker. A smallish, mild, flaky cod fillet reposed in a thick, golden batter and perched an eggy brioche bun dressed with shredded lettuce and a tangy dill dressing. A side of slaw was decent, with fresh shredded cabbage in a creamy dressing.

I was hankering for an excuse to get back to bar Vetti to try more good stuff, and the recent launch of lunch hours and a separate midday menu gave me the reason I needed.

Same as the first time, we couldn’t find a thing that we didn’t like. All our dishes were well made and flavorful and plentiful too. The short lunch menu of soups, salads, five pizzas, a half-dozen sandwiches and a single pasta dish tops out at $19 — a salumi pizza topped with three kinds of sausage.

A steaming cup of tomato soup gratiné ($8 for a generous cup, $10 for a bowl) was soothing and rich, a subtly seasoned tomato and heavy cream  purée topped with crunchy toasted croûtons on a raft of mild fontina cheese seared under the broiler.

A crispy pork parm sandwich ($12) consisted of a fine, sizable boneless pork loin pounded thin and crisply breaded, schnitzel-style and fried dark and crisp. It was coated with a thick, savory tomato sauce, fresh mozzarella and scattered hot peppers. A side of charred cabbage was a creative take on slaw, barely cooked crisp shredded cabbage dressed with olive oil and red pepper flakes.

Lunch, with the tip built in, was $35.51, plus a fine homemade chocolate chip cookie for $1.59. Service — ordering at the bar, with delivery to the table — was as courteous and thorough, as if we had tipped the old-fashioned way. •