Imagine your stereotypical female superhero. Not how most women look, right? Comics have a tendency to stay away from sexual matters, even when they’re written for adult audiences, yet they have no problem sexualizing their characters.

The humor and relatability makes “Sex Criminals” great, and how it deals with that aforementioned issue makes it important. The story is simple and genius: Jon and Suzie stop time when they orgasm, they discover each other shares that power, and they stop time to rob a bank and save a library. But we’re way past that now. At the beginning of this new story arc that starts with No. 21, Jon and Suzie are broken up, and figuring out what to do with their lives without the other.

Matt Fraction and Chip Zdarsky are a match made in heaven, even if it’s a heaven for middle schoolers doodling penises on notebooks. Fraction’s scripts are heartfelt, while Zdarsky sneaks in lowbrow sex humor. Instead of sex being a device to further plot, the plot is a device to further discussions on sex.

Also worth mentioning is the eight-to-10-page letter column at the end of every issue, called “Letter Daddies,” where Fraction and Zdarsky give hilarious sex advice. These aren’t included in the trades, so it makes the book worth picking up in single issues. 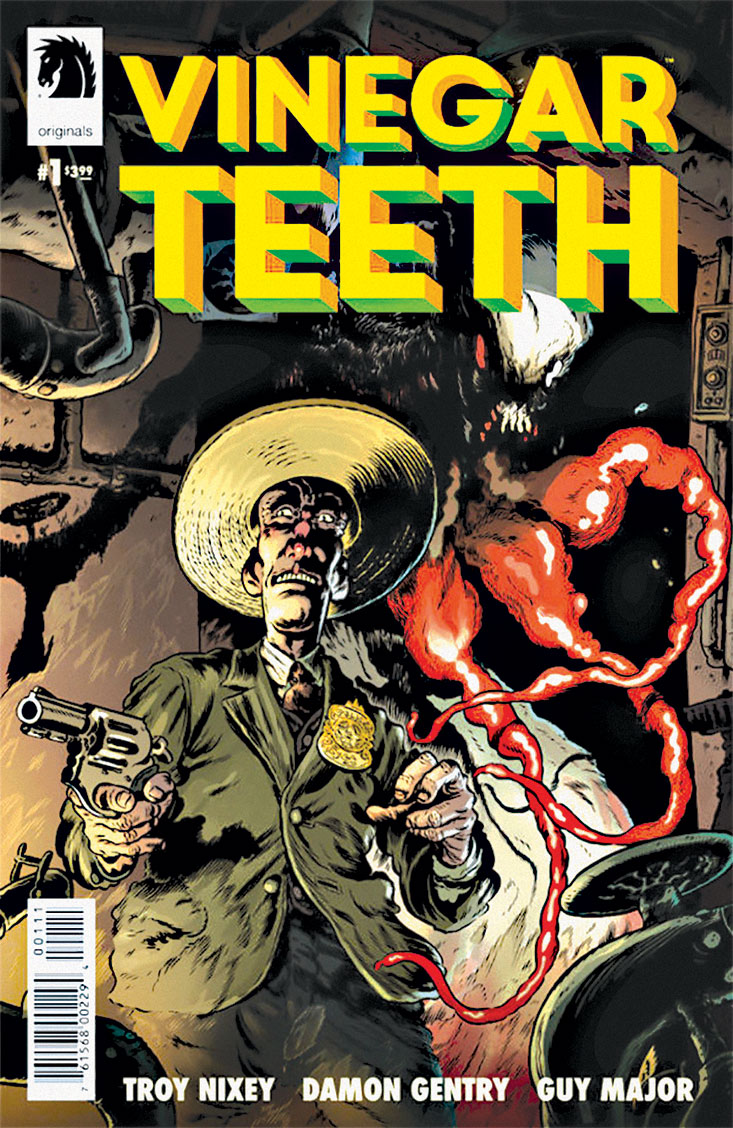 These days, it can seem like an entire comic is spoiled for you months before it even comes out. “Vinegar Teeth” No. 1, however, I knew nothing about. I liked the art, and that was enough for me to give it a shot.

We’re introduced to Brick City’s finest cop, Artie Buckle. The irritable, charmless, alcoholic Artie may not be a great person, but he is great at his job. When a giant monster appears and gobbles up criminals, the press, dubbing the monster Vinegar Teeth, decides it was such an act of community service that the monster is actually given a badge and made a police officer. Artie has a new partner now, and hopefully they can settle their differences.

In the gorgeous, 1930s-styled world of “Vinegar Teeth,” we get a wonderfully weird story with wonderfully weird artwork that complements each other perfectly. Everything looks unique and interesting. The citizens of Brick City all have exaggerated features, and our monster looks downright gross. It is cartoonish and contrasts well with scenes that can be heavy on bloodshed and swearing.

Described by Dark Horse Comics as “H.P. Lovecraft meets ‘Lethal Weapon,’” “Vinegar Teeth” No. 1 immediately promises to be a hilarious crime, horror and sci-fi genre mash-up. For anyone who thinks they’ve seen it all, writers Damon Gentry and Troy Nixey (the latter also doing art duty on the book as well) seem to have created the perfect book for you.