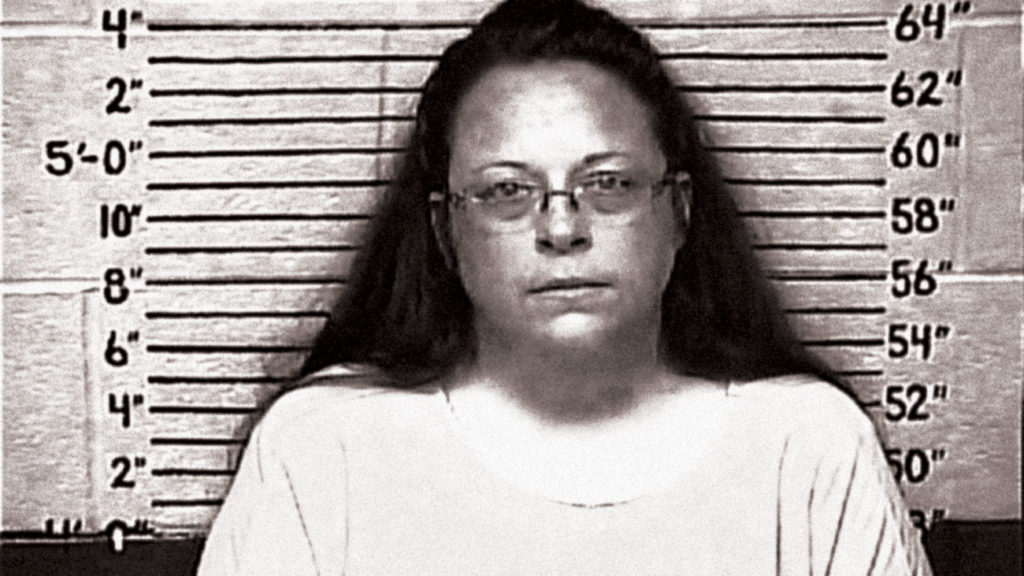 It’s time for Kentucky to give Kim Davis a permanent time out.

Kim Davis, the Rowan County Clerk, has behaved very badly. The good news is that 2018 will offer the opportunity to provide consequences for that bad behavior, with four candidates announcing they will seek her seat — one of them the very man Davis denied a marriage license — and Kentuckians should see ousting Davis as a mandatory item on our to-do list.

Let’s not forget that Davis, best known for humiliating gay people while playing the victim, stuck the Commonwealth with the bill for her antics. It’s not just a monetary loss; in the eyes of the public here and outside of the state, Davis is filed neatly under “Kentucky.”

People want to shrug off Davis as a joke or an outlier, but she’s real, and she has power — particularly as a figure who has invigorated a movement of Christians who believe being forced to treat queer folks fairly is a violation of their religious liberty.

And they’re still high on their own nonsense. Look at the iconic footage of former Arkansas governor and failed presidential candidate Mike Huckabee, Davis and her attorney at the rally to celebrate her release from jail. Their joined hands stretch into the sky, faces transformed by euphoria, while Huckabee weeps — all to the soundtrack of “Eye of the Tiger.” In the crowd, supporters wave white crosses to remind everyone that this is a holy crusade. We should all be frightened by this spectacle; the whole tableau is regressive. No matter where Davis goes, whether a press conference or a trip to Romania, she is consistently surrounded by powerful, homophobic, self-righteous men guiding her every move.

For this powerful segment of the population, gay rights are the enemy of religious freedom. My desire to find a nice wife with whom I can watch Netflix is actually part of greater spiritual warfare, a battle being fought on another plane, with Satan at the helm. This sounds like the arena of dystopian science-fiction, but the religious right has finally found a narrative that works: Gays are the real bullies.

Rowan County may seem far away from Louisville, but this narrative is setting the tone in Kentucky. Who can forget the taunting billboards erected by the Ark Encounter folks? “To our intolerant liberal friends,” it read, northbound and southbound on I-65, “you can’t sink this ship!” The idea has caught on, and for those with a persecution fetish, poor Kim Davis’ mug shot is the proof.

The good news is that Davis’ time in office is running down. The bad news is that when she runs for reelection, she’ll have the weight of the Liberty Counsel and other conservative groups behind her. This means that we, as Kentuckians, need to make replacing Davis a priority.

Luckily, we have options. With a Jan. 30 deadline, four candidates have already filed. The first was Elwood Caudill, Jr., who ran against Davis in 2014 and lost by a narrow margin. Caudill’s campaign page features a brief statement of intent: “Please know that I am running for Clerk because I have 21 years experience working with the Clerks office & know that I would do a great job as Clerk. I am not running because of any other reason … I will say this. I do not discriminate against anyone. We are all equal.” While candidate Jamey Jessee’s official page is similarly devoid of express support for the queer community, it has adopted the #AFreshStartForRowanCounty hashtag.

These sentiments are better than Davis’ position, but queer folks in Rowan County deserve more than support offered in hedging language. Candidate Nashia Fife is more overt about her reasons for running. Fife declared her intent to run back in 2015, when she saw the hurt Davis was causing. While she claims the atmosphere in Rowan County is currently civil, her campaign page has been targeted with homophobic slurs, including the claim that if she wins, there will be “’fag parties’ in the White House” (in which case I’d like to RSVP an enthusiastic ‘yes’).

The most high-profile candidate so far is David Ermold. Ermold and his now-husband, David Moore, became the face of the fight against Kim Davis when the video documenting Davis’ illegal and humiliating refusal to grant him a marriage license, went viral. Ermold filed suit against Davis, making him — like the Virginia legislature’s trans candidate Danica Roem, who recently defeated the anti-transgender candidate — the most obvious candidate. The poetic justice of Roem’s win thrilled the equality crowd.

Fife, however, isn’t sold. “I do like the idea of poetic justice,” she told me, “but that doesn’t guarantee someone will want the job and be able to continue once the spotlight fades.”

Both Fife and Ermold have relevant education and experience, but Ermold, after working behind the scenes for the past few years, has learned that winning requires more than that, which informed his decision to run. Aware of the backing that will be necessary to win this race, Ermold told me, “If there were anyone I thought could beat Davis, I wouldn’t have entered the race.”

Ermold is also clear on this point: This election has local and national ramifications. “The country is going to be watching this race,” he said, emphasizing its importance.

So let’s get to work — let’s give Davis plenty of free time in which to sit quietly and think about what she’s done.