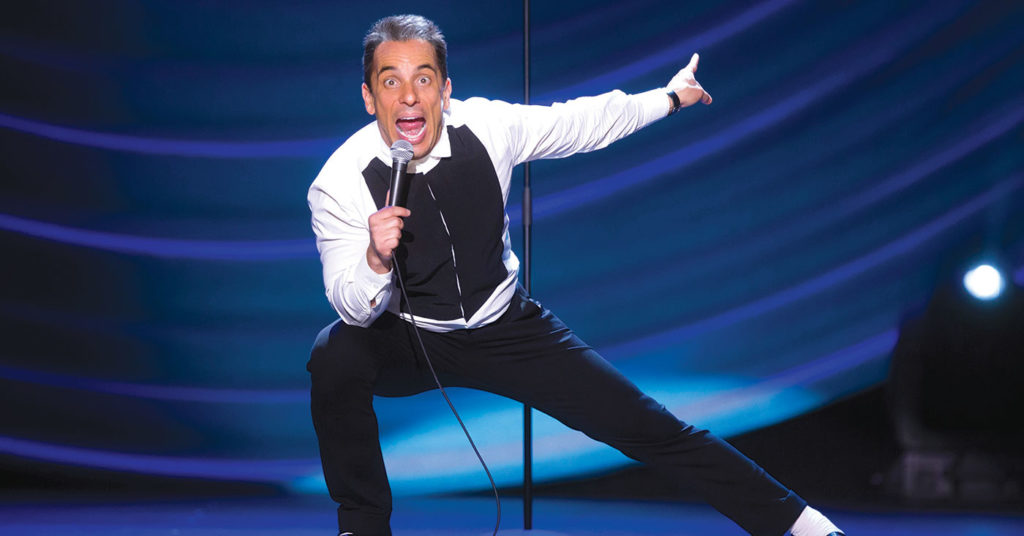 Stand-up comedian Sebastian Maniscalco is on the cusp of becoming a household name. His friend Jerry Seinfeld (yeah, that Jerry Seinfeld) said of Maniscalco, “He’s so great. So brilliant. So fun.” He has done three full-length comedy specials for Showtime, and will record a fourth next spring. Also, his first book “Stay Hungry” will be released in February. As of late, Maniscalco has been pursuing acting when he isn’t performing. He appeared in this year’s “The House” with Will Ferrell and Amy Poehler, and voiced Johnny in “The Nut Job 2.” Next year, he will take a serious turn in Martin Scorsese’s “The Irishman.” This week, Maniscalco makes his Louisville debut with a one-night-only performance at The Brown Theatre.

LEO: What was life like growing up in Chicago?
Sebastian Maniscalco: My father was Italian, from Sicily. He was a hairdresser. A bald hairdresser with a ponytail. That might give you some idea of what I was dealing with. He has a big personality and has always been the butt of my jokes. Because a lot of those old world morals and values from the farm my dad grew up on. They definitely made their way to the states to haunt my childhood. [Laughs.] That’s a lot of what my act is culled from. Growing up with an overbearing Italian dad who is always on my ass.

Given his old-world farmer values, how did he take you wanting to be a comedian?
He was actually very supportive. He wanted me to be happy. For years, there were ups and downs professionally. When I was feeling down, I would call him, and he would encourage me and push me. Plus, I graduated with a business communications degree. He had to know there was nothing I could do with that, and figured I might as well join the circus. A business communications major, even I don’t know what the hell that means.

Have you always wanted to do comedy?
In second grade, school asked the class what they wanted to be when they grow up. Everyone else wanted to be a policeman, firefighter, accountant or whatever. I said, ‘Stand-up comedian.’ I grew up watching Johnny Carson, Jerry Seinfeld and Richard Pryor. It was just something I took an interest in. When I was home or with my friends I would always hold court. I think the dinner table was really my first stage.

You mention Jerry Seinfeld. Now you’re friends with him. You’ve also been on his show ‘Comedians in Cars Getting Coffee.’ Is it surreal to be in the orbit of someone you grew up idolizing?
Oh yeah. We met three years ago in a club and instantly became friends. He’s a great brain to pick. But growing up watching him perform and then watching his TV show. And then all the sudden I’m in a car with this guy driving around Los Angeles drinking coffee. It’s a strange feeling, for sure.

What’s the best and worst advice he’s given you?
There’s not really any bad advice coming from a guy like Jerry Seinfeld. But just watching him and knowing that you still have to put in the work. No matter how successful you are. No matter how many TV shows you’ve had. No matter how much money you make. No matter what. You have to keep putting in the work. And that’s with anything, not just comedy.

You’ve spent the past few years settling down and starting a family. How’s that going?
It’s funny — you spend your 20s having your fun. You spend your 30s trying to build your career. Now I’m 44, and that’s just my priority now. It’s good, too, because obviously being married and having kids are all experiences that are conducive to taking to the stage. I just got back from my wife’s family for Thanksgiving. Let me tell you, their holidays could be an hour’s worth of material itself.

After doing this for so long, you have to have some good stories from shows gone wrong.
At The Comedy Store there was a guy in the audience who wanted to fight me. He stood up and took his shirt off for some reason. He wanted to fight me shirtless. I don’t know why the guy had to take his shirt off. I mean, I probably would have fought him with his shirt on. But once he took it off, I was like: ‘Nope.’ And one time I did a gig where I had to perform in a boxing ring. There was a bowling alley in the building, as well. So I’m telling jokes and people are picking up spares behind me. I’ve been some weird places, man. But I’m good with where I am now.