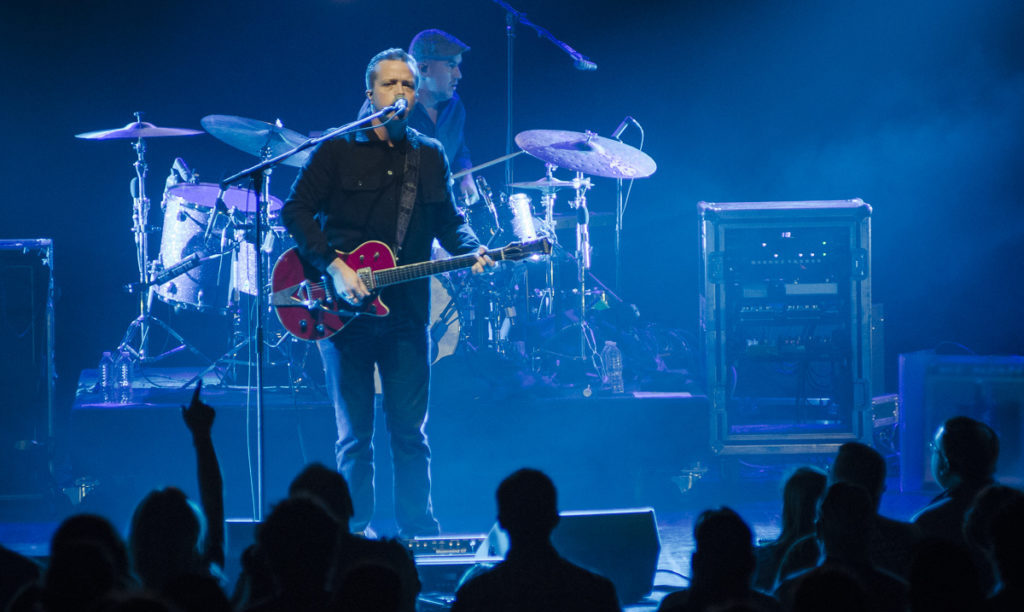 Jason Isbell played a two-night stand last Thursday and Friday at the Louisville Palace. Below are our reviews from each night.

Nik: The Palace glowed with the light from a giant tattoo bird and anchor on the stage backdrop, as Jason Isbell and the 400 Unit walked on stage Thursday night. The light gave the Palace the intimacy of a wildly classy bar. It morphed colors and never stopped shining throughout the show, and neither did the band. Always pushing forward, they did not turn off or slow down the entire show. Pauses in between songs were almost unnoticeable as they bounced between material from Something More Than Free and The Nashville Sound, reserving work from Southeastern toward the end of the show. While Isbell’s wife, Amanda Shires, the 400 Unit fiddle player, wasn’t present (she is on tour with John Prine, whom Isbell remarked about during the show, “If your wife is going to run off with the mailman, it might as well be John Prine.”). Sonically, her absence was a nonissue as the band filled in the blanks beautifully.

There is a distinctive flavor to Isbell’s sound that makes the title The Nashville Sound a tongue-in-cheek choice, as the album is quite different from what one typically thinks of Nashville. These nuances seem to come from a self-awareness that they need to do something more than just write the same song over and over again — a trait the 400 Unit carries from playing together for as long as they have and what many country acts haven’t yet experienced.

Scott: I love seeing a band when they’re doing multiple-night stands because it usually means they reach a little deeper into their discography to make each set a bit different. From a setlist published online, I saw Thursday night’s crowd got to hear the Drive-By Truckers classics “Decoration Day” and “Never Gonna Change,” as well as a few of Isbell’s deeper cuts from through the years such as “Super 8” and “Codeine,” and on Friday night, we heard “Alabama Pines,” “Dress Blues” and a cover of Tom Petty’s “American Girl.” There were also plenty of tracks off of 2017’s The Nashville Sound  as well, including “Anxiety,” “Tupelo” and “Cumberland Gap,” making it a well-balanced show with selections that spanned more than a decade — a good mixture of big rock songs and melancholy folk ones. On stage, Isbell has the ability to make his songs soar with the sort of emotionally-driven peaks that define some of the most impactful rock and roll. He can also slow down things to levels for story songs that make it seem like he’s playing in someone’s kitchen to 10 people. His set twisted and turned through a range of material that never stayed in one place sonically for too long, weaving through the different sides of his music in a way that never fell into dull territory.