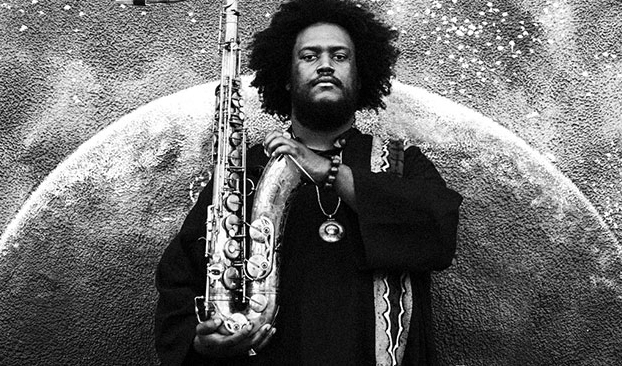 The Los Angeles-born tenor saxophonist Kamasi Washington has become a beacon for the future of jazz. He started strong with the release of his sprawling, dream-inspired 2015 debut The Epic (released on Flying Lotus’s Brainfeeder label), and, that same year, he played sidekick on Kendrick Lamar’s To Pimp a Butterfly, lending a hand as one of the jazz savants who performed on the Grammy-winning record. On his latest EP, Harmony of Difference, Washington enlists a massive ensemble, while composing by counterpoint in a six-part suite. Arranged in five stages, the EP leads to the final answer, “Truth,” which combines all of the five previous phases into one extended expression. The resulting axis of notes is subtle in execution, yet jarring enough to take the listener on a spiritual journey. Harmony of Difference is Washington’s introspective follow-up to The Epic.

“What I’ve gained from interacting with people from traveling the world, seeing so many things and meeting so many people, it is a sense of truth,” he told LEO. “It’s a sense of understanding. That’s why I named the last piece ‘Truth,’ the five pieces that came before it were, for me, the road to ‘Truth.’”

The music on Harmony of Difference started as part of a multimedia display at New York City’s Whitney Museum of American Art for its 2017 biennial exhibit, alongside the abstract art of his sister, Amani Washington. It was successful enough to demand a more accessible format of the music, which bestowed the 31-minute EP. Washington now tours with an eight-piece group and will be hitting Headliners Music Hall on Sunday, Dec. 10. LEO caught up with the saxophone giant to gain further perspective on his spiritual approach to jazz music.

LEO: For Harmony of Difference, the number of personnel tripled compared to The Epic. Why?
Kamasi Washington: It’s the music itself that determines the instrumentation, a lot of times. We added a vibraphone player and a guitar player for the band. To me, it was a musical decision, the music was calling for it.

Does the song ‘Humility’ have to do with Kendrick Lamar?
[Laughs] No, actually, I hadn’t heard [Kendrick Lamar’s “Humble”] yet when I wrote, I guess, my ‘Humility.’ Harmony of Difference was the first thing that came to me, that statement. There was so much negative energy in the world being directed towards the idea of diversity. I live in Los Angeles, a really great, diverse place. It’s really the coolest thing about my city, and it was almost like I was living in this field of flowers, a beautiful field of flowers, and all these people were talking about how bad their sinuses were. We really weren’t getting the idea of how blessed we are to have so many people from so many places in one place. In that, I was racking my mind: What am I really trying to get at with this idea celebrating our differences?

Start off with ‘Desire.’ In order to get that understanding, that enlightenment or truth, or wisdom, you have to first want it. You have to want to have it, and that’s where ‘Desire’ comes in. ‘Humility’ is necessary, because once you want that, accept the fact that you don’t have it, and that even though you’ve lived and you had experiences, it’s a journey that is ongoing. And to really come to that reality, you have to have the humility to say, ‘I don’t have it.’ ‘Knowledge’ is kind of a journey. ‘Knowledge’ is all the experiences and the information that you gather all of your lifetime that you use to try to get to the truth. But the reality is that information, knowledge — they can be manipulated. You have to have ‘Perspective,’ which is the fourth part, to really know what to do with the knowledge that you have. And then the fifth part, ‘Integrity,’ is the final part in that at some point the picture will start to become clear and you’ll start to get that understanding, but you have to have the integrity to accept it regardless if it’s what you wanted it to be or not.”

How does your education in ethnomusicology influence your musical perspective?
It just made my approach to life a bit different. We travel a lot. I’m always trying to search out the local music wherever I go. In ethnomusicology, you get an appreciation and an affinity for hearing all of the different approaches to music that we have on this planet. It affected my music directly and indirectly.

How does it feel to be considered the head of a new jazz movement?
I definitely feel honored that people acknowledge me as being a part of this heritage that I feel so much love for. In the end, and I’m sure it’s true with any musician, you can only really represent yourself… Language is just noise without meaning. We kind of determine the meaning of the noises that we make.