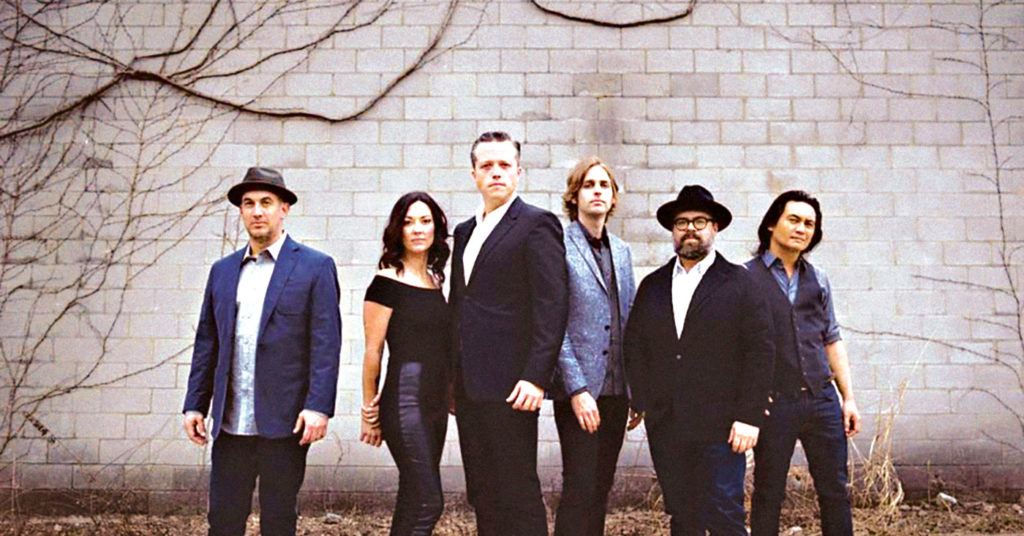 The Nashville Sound, like every Jason Isbell record, digs into down-and-out story songs about characters trapped in desperate situations, and there are also the expected sharp, introspective ballads, but this album has a different sociopolitical edge to it. It reflects the larger world around him, taking heavy and turbulent issues about class, race and ideology, and filtering them through a deep look at himself, and his past, present and future. It’s an album about him that’s not really about him. It’s an album about seeing past yourself. It’s an album named (possibly sarcastically) after a city, but it’s about America in 2017.

Isbell, who started his career as a member of the venerable alt-country outfit Drive-By Truckers back in his early 20s, has carved out a solo career that puts him in the conversation with the best songwriters of his generation through an ever-growing trail of prolific and impactful work at the age of 38. After a rough patch that landed him in rehab back in 2012, Isbell fired back with three records that are among the most complete and important in his discography. After the brilliant and melancholy Southeastern (2013), Isbell followed up with the bigger-sounding Something More Than Free (2015), leading to this year’s The Nashville Sound, which features a love song about being happy, but looking at inevitable death on the horizon (“If We Were Vampires”), a driving, level-headed rocker about ego (“Hope the High Road”) and an honest conversation about race (“White Man’s World”). Currently living in Nashville, with his wife, the singer-songwriter Amanda Shires (who’s also a member of the 400 Unit) and their two-year-old daughter, Isbell spoke with LEO about the themes of the new record and growing up in one of the most storied musical regions of America.

LEO: It seems that fatherhood and the sociopolitical climate had a significant impact on The Nashville Sound. Have those two things led to certain issues and different perspectives and the world’s imbalances being magnified for you?
Jason Isbell: Well, it’s motivating. I don’t think having a family really changed our views on anything as far as a belief perspective, but it definitely made me feel like I had a responsibility to talk about those things in the music that I was making. So, I think that is probably what made me write more songs that discussed my belief system and what I think is socially broken. You get a little older as a songwriter, and you stop writing, I think, as much about yourself — in most cases, it doesn’t always happen this way, it was sort of the reverse for Dylan, but he’s always the opposite of everyone else. But, for most people, you start your career out writing about love and death and things like that. When you get your priorities in order, your problems tend to be solved a little bit, and you start looking outward. Now, it just happens to be the time you start looking outward, you find a lot of things to talk about.

When you look at the batch of songs from Something More Than Free next to the songs on The Nashville Sound, what are the biggest differences you notice? Have you seen any changes in your songwriting, small or otherwise, in that short amount of time?
I think the nature of the songs are way more personal on this record, than they were on Something More Than Free. The character sketches have more of a direct correlation to my own experience, and there are more songs that are just more specifically about me, this time around. Which is a bit of a contrast to the last question we discussed, but I felt like it was necessary on this record to deliver a lot of myself, of my own privacy to the listener, in order for people to take what I was saying seriously.

Could you elaborate a little bit on that, of why you incorporated yourself so much, so people grasped on to those bigger, idealogical themes?
If you’re telling someone how to behave, the best way to go about that is, in my own experience, to start with, ‘This is what has worked for me.’ I feel like if you’re trying to make a point about sociopolitical culture, you have to start from the ground, you have to start with, ‘This is my story. This is why I came to this belief.’ So you get very personal to broaden the spectrum of what you are discussing.

“If We Were Vampires” is about appreciating the short amount of time you have with the people that you love. Is not taking things for granted something you think about a lot these days?
Yes, very much so. And that has solved most of the problems that have come up in the last four or five years in my life, being more grateful and aware of things that I’ve been fortunate enough to be surrounded by. I think that’s sort of the trick to being a happy human being. Also, probably the trick to being an effective one, if you’re trying to change the world outside your own door. It all starts from this perspective of counting your blessings.

“Cumberland Gap” is about a character being trapped in a circular state of unhappiness, of wanting to escape. Those fictional story songs of a character being weighed down by life, you always seem to have one of those on every record. Why are they important to you?
I grew up around a lot of those folks. A lot of people who were close to me in my childhood and in my formative years, are the people that don’t have a whole lot of choices in life. You wind up stuck in the same circle. And, usually, it’s due to no fault of their own. It’s usually just where they were born, and the options that they were given. I still have a lot of those people in mind when I’m writing songs. It’s hard to write songs about broad subjects, but one person’s individual story, that’s a good place to start.

Growing up in Muscle Shoals, what impact did that have on you as a guitar player?
I was very lucky, as a guitar player and songwriter, and as a musician in a band. I learned how to play with other musicians from people who have been doing it for decades. And people who had been on famous R&B records and rock and roll records. We had liquor laws that kept venues from being open unless they sold more food than alcohol — everything was a restaurant, essentially. So, I couldn’t be kicked out of these places when I was 15 or 16 years old, because they weren’t bars. That was really fortunate for me. It was unfortunate for a lot of people, who were maybe trying to keep live music going, but it was great for me, because I could go see my influences actually playing songs that they had sometimes recorded, on a Friday or Saturday night.

After you write a song, how do you then work with the 400 Unit to build it up sonically? And what effect have those players had on your solo career?
I think they’re irreplaceable. We’ve been playing together for a long time now, and I value their opinions as musicians a lot, primarily because they always serve the song. I never feel like I’m having to pull anybody back, or having to tell people to play less, or encourage the band to let the song live rather than prove how good of a player they are. When we go into the studio, I’ll play the song for them, that will be the first time they hear it, and we’ll start building it, and we play it over and over until it’s right. And that’s a really enjoyable way to work for me, because it’s not so scripted or by the book, and you have a lot of time to improvise, but, last the same time, you can’t do that unless you have players that are technically good and very quick at learning.