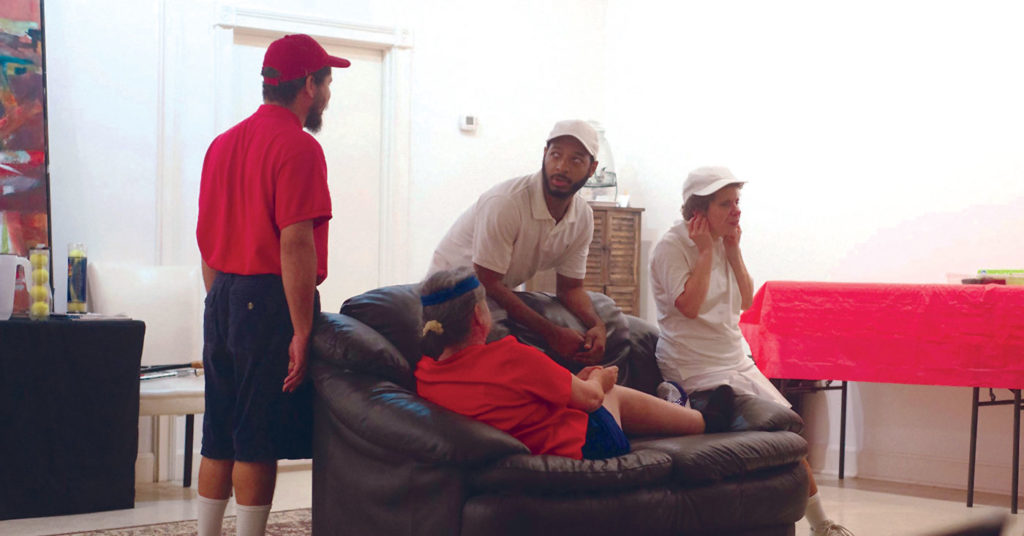 A friend of mine invokes a two word mantra every time he talks about what it takes to achieve excellence.

His idea is that of all the obstacles that stand between us and success, none is more formidable than our own ability to invent reasons to fail.

As far as I know, Imagine Blind Players, which describes itself as “Kentuckiana’s first traditional theater company of the blind and visually impaired,” doesn’t have a motto. If it did, it probably would not be “No Excuses,” because I doubt the word “excuses” is even in the troupe’s vocabulary.

Even companies that offer Braille play readings are uncommon — though when I started looking around, I learned that the American Printing House for the Blind has presented its Blind Braille Reader’s Theater for going on seven seasons (and I’m embarrassed that I’ve never attended a performance).

Last spring, Imagine Blind Players put on their first production, a piece of mystery theater in partnership with Whodunnit Productions.

In terms of theatrical quality, it required no excuses whatsoever.

The production was staged at Lettersong Calligraphy Studio/Gallery, which is as eclectic a venue as there is in the city (visual arts exhibits and instruction, yoga classes, concerts, open mics, etc.).

“California Suite” is a drawing room comedy of manners that’s built with fast-paced dialogue and plenty of banter. But it’s also a highly-physical play, with lots of action including a droll climactic fight scene) that highlights this company’s outstanding strength and versatility.

The first segment featured B.T. Kimbrough and Terrie Terlau as a divorced New York couple squabbling over past wrongs and the future of their daughter. The second segment featured Darren Harbour (company founder and director of the production) as a Philadelphia-based, philandering husband who awakes in his hotel room with a drunken prostitute (Barbara Henning) in his bed just as his wife (Terrilyn Fleming) arrives in town to join him for a wedding. In the third segment, Henning plays an outrageously-pompous, completely neurotic English actress who has flown in with her husband because she’s been nominated for an Oscar. Her husband (B.T. Kimbrough) is, shall we say in the parlance of the ‘70s, closeted but flamboyant.

And the final segment brings together two tennis-playing couples from Chicago whose friendship has suddenly exploded into a drama because of a courtside injury. They’re played by Thomas Saling, Sue Ellen Melo, Darren Harbour and Barbara Henning.

Each segment is introduced by witty, situational original songs composed for this production and credited to the company as a whole.

As for the performances, the cast was primed and ready for action. It’s not the sort of thing you often notice in theater, but there was a sort of unleashed jubilance about the performance that suggested these folks knew they were doing something quite out of the ordinary. Voices were confident, bold and idiomatic. Terlau and Kimbrough were fierce, unyielding combatants in their segment — right until they tapped into a vein of nostalgia and regret. Harbour’s scheming efforts to keep his wife, Fleming, away from the bedroom (and out of sight of Henning’s drunken prostitute) were a fiendish fun — as was the indignant spousal bargaining that ensued after the discovery was made. Henning and Kimbrough made a marvelous, self-medicating British couple, one spinning into a narcissistic cycle of anxiety, while the other maintains an elegant reserve. And the final segment was uninhibitedly boisterous.

The vocal work was fine, and the physicality of the production was outstanding. It seems clear that a director who is blocking actors who are blind, or visually impaired, has to think meticulously about how to shape the action. And in this production, I thought there was a rigorous mindfulness to all of the action. Every scene used the entire set and the performers moved not just with grace and confidence, but with a sense of purpose — as if each tiny bit of blocking had emerged from an unusually close reading of script and character.

In an interview, Harbour, the founder of the company, told me that he was born in Gary, Indiana. He was sighted at birth and lost his sight to a degenerative eye disorder — but not before he had developed a passion for dance, for circus arts and for theater. He came to Louisville to study at the Kentucky School for the Blind. He now works at Commonwealth Theatre Center as a children’s outreach artist.

And it’s clear from this production that he has found an outstanding group of colleagues who share his passion for theater. The company’s web presence at the moment is via Facebook. But I expect you’ll be hearing quite a bit more from them in the future. •