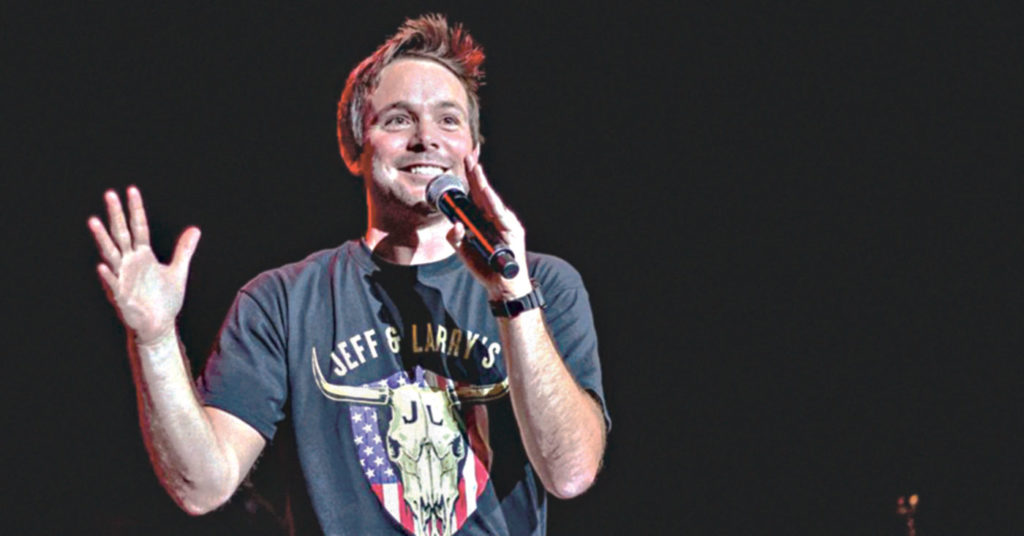 Comedian Nick Hoff says the Nebraska streets he grew up on were rough… because they were mostly gravel. You may have caught Los Angeles based stand-up comic opening for Jeff Foxworthy and Larry the Cable Guy on their 2015-2016 co-headlining tour. He has appeared on “Acting Out” on MTV and in commercials for Miller Lite, Wendy’s and Amazon.com. On Dec. 15, he will release his latest album “Baby Daddy,” coinciding with him headlining at The Caravan.

LEO: This is your first time here since 2009. What are your memories?
I went to the Slugger Museum and swung Mickey Mantle’s bat. But what I really remember was that movie ‘Crazy Heart’ was out with Jeff Bridges. Where he was that drunk, whiskey-drinking country singer. I watched that movie in the comedy condo and just started drinking whiskey profusely. I had convinced myself I was his character that whole week. And that movie is a really good template for where whiskey can take you. I hit it hard that week. I’m looking forward to revisiting that.

Do you remember your first time doing stand-up?
Yeah, it was OK. Just OK. It was OK enough that it didn’t burn me so I wouldn’t go back. It was enough to spark something in me to keep going. But I had been thinking about doing it for a long time. But I didn’t know how anything worked. In college, I was an usher at the campus theater. If you took people to their seats, you could stand back and watch the show for free. Every year, they brought in a big comedian. And one year they brought George Carlin. I knew the general manager pretty well. So I asked him, ‘Hey, I have some material I’ve been working on. Do you mind if I try it out before Carlin comes on?’ And he was like: ‘Are you insane? I’m not going to put you on stage for the first time in your life, especially not in front of George Carlin and 2,300 people.’ I was confused, I was like, ‘Why not?’ And thank God that didn’t end up being my first time. Thankfully that general manager was rational and sober. That guy is the best thing that ever happened to my career.

Having a family, does it make it hard to be out on the road?
Yes. I just get hate texts from my wife constantly: ‘The kids won’t go to sleep!’ And I’m just sitting in a quiet hotel room somewhere and eating room service. Like, ‘Honey, I’ll call you back after the masseuse leaves,’ while sipping a mai tai. But you have to have kids for the material, right? Otherwise you run out of chlamydia jokes real quick.

Settling down has been good for your comedy?
Yeah. I remember early on, after I got married. I remember talking about being married on stage and people would just look at me like I didn’t know anything. I had only been in a month, six months, a year, maybe. And I didn’t know anything. People would just look at me like: ‘You are an idiot!’ I had a joke about being honest with your wife. Even when she asks, ‘Am I getting fat?’ You have to bite the bullet early on and tell her the truth. I think the punchline was ‘I’d rather not have sex for a week than get crushed by a whale.’ Audiences were like, ‘Nope. He’s still a rookie.’ I’ve figured things out since then. Sometimes we have to cling to the lie.