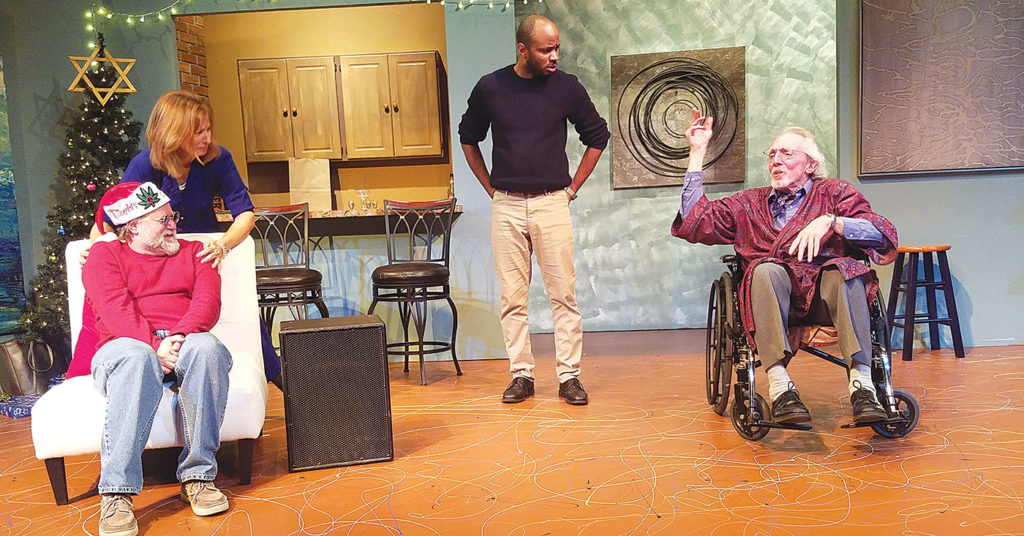 If there’s a war on Christmas, the theaters of Louisville are not involved. If you wanted to, and had the stamina, you could easily celebrate the season by seeing Twelve Plays of Christmas (well, technically 12 days of Christmas and Hanukkah).

I can’t cover them all. In fact, I can’t fully review all the plays I’ve seen that are currently on stage. So here are capsule reviews of four plays.

This first item has absolutely nothing to do with the holidays — unless you buy a bunch of tickets and take people to see this important and rarely-staged work.

Egyptian playwright Ali Salem, who died in 2015, is not well known in the West. For that matter, he’s probably not well known in Egypt. In 1994, he wrote a book proposing reconciliation between Egypt and Israel. As a result his work was banned and the rest of his life was spent in a kind of internal intellectual exile.

Salem’s 1970 play, “The Comedy of Oedipus: You’re the One Who Killed the Beast,” runs through this weekend at Commonwealth Theatre Center in an excellent student production directed by Mera Kathryn Corlett. Salem moves the Oedipus story from Greece to Egypt and presents it in a modern political and cultural context.

The action plays out in a world populated by bureaucrats and secret policemen, a world where celebrity is the most valuable commodity. And although Oedipus (Oliver Cox) doesn’t really want to be a celebrity, that doesn’t matter to the pop singers and politicians who capitalize on his victory over the Sphinx.

In a land where populism has gone awry, Awalih, the head of the Secret Police is a master of exploiting the fears of the masses and breaking the spirit of the opposition. Noah Bunch plays the role with a cruel, convincing swagger. In the end, though, it’s Tiresias, the blind soothsayer (played by Hermione Bean-Mills) who can see a better future.

‘The Comedy of Oedipus: You’re the One Who Killed the Beast’
Through Dec. 9
Nancy Niles Sexton Stage
1123 Payne St.
commonwealththeatre.org
Prices and times vary

Bunbury Theatre’s holiday offering is “St. Nickaklaus and the Hanukkah Christmas,” by Juergen K. Tossmann, who also directs and acts in the production. This is an updated version of Tossmann’s 2003 play, “Living With Klaus.” The Klaus of the title is a brilliant, but aging actor, a Holocaust survivor who is now falling into dementia. As Hanukkah arrives, his family is struggling with how to lovingly figure out how to address the looming eldercare issues that confront them — a challenge complicated by the fact that although Klaus is physically weak he still possesses a commanding presence. Tossmann’s script is a poignant, insightful comedy that revels in theater riffs and wordplay, but never hides its eyes from the reality of the situation.

But the key role here is Klaus, played by Matt Orme (who originated the part in 2003). Klaus is a powerful, egotistical man battling his emerging age, his physical vulnerability and the looming dementia that coexists with his still formidable intellect. Orme brings him to life in a mercurial performance constructed of meticulously crafted physical and vocal detail — a palsied hand, a mental short circuit that carries him abruptly to a long-ago rehearsal for Othello. It’s a delightful piece of acting — all the more because it doesn’t feel much like acting at all.

Perhaps you have wondered why it is that the Actors Theatre of Louisville production of “A Christmas Carol,” is “the second longest running production of the play” in the country. Well, the reason is that Barbara Field, who adapted the play from the Charles Dickens novella, was serving as Playwright-in-Residence at the Guthrie Theater when she wrote the script. By the way, Field’s career as a playwright extends far beyond “Carol.” She also wrote a play called “Neutral Countries” that was produced in the 1983 Humana Festival and was named “Best American Play.” And she’s created a significant body of work beyond that.

That’s your “Christmas Carol” factoid for 2017. This year’s production is up and running under the direction of Drew Fracher, who took up the play in 2014, when ATL refreshed the play with new costumes, scenery, aerial work, etc.

Year over year, there’s quite a bit of continuity to “Carol.” Many of the performers return each year — and the scenery and costumes that were introduced three years ago are still spectacular. So is Lindsey Noel Whiting, who has played the Ghost of Christmas Past a few times in the past and whose aerial work is a flat-out marvel. Of course, the role of Tiny Tim tends to go to a newcomer; this year it’s the charming Jacob Bukowski (whose older brother, Nathan, is already a “Carol” veteran — though he’s only in third grade).

The big change this year is that William McNulty, who put his stamp on the role of Scrooge over a many seasons, is not in the role this year. John Preston (who has previously been seen as the play’s Narrator takes up the central role).

Despite returning cast members and consistent production values, the texture and feel of the play shifts from year to year. Some years it has gravitas, an urgent grandeur that plumbs the moral questions at the heart of the story. Some years it has a frothier, cheerier tone that comforts and lifts the spirits. Both approaches produce stimulating theater. This year’s production leans toward the latter. There are still terrifying specters on hand (Larry Bull’s Marley, for instance). But even the early scenes have a disarming irony about them that foreshadows Scrooge’s ultimate redemption.

ATL introduces another holiday production this year, “The Santaland Diaries,” a one-man show by David Sedaris, adapted for the stage by Joe Mantellow, directed by Meredith McDonough.

Nathan Keepers takes on the role of Crumpet the Elf — the character Sedaris introduced to NPR listeners back in the early 1990s. Given that for millions of radio listeners, the voice of David Sedaris is inextricably linked to these stories, it must be terrifying for an actor to bring this part to a live stage. If so, you couldn’t sense it in Keepers’ fast-paced performance. By turns, he was mordant and defiant, profane and poignant. Cunning scenic design by William Boles turned the set into a constantly evolving playpen for Crumpet’s childlike antics. And just when you think you’ve laughed enough, Keepers taps into a vein of emotion that flips the story in a new direction.