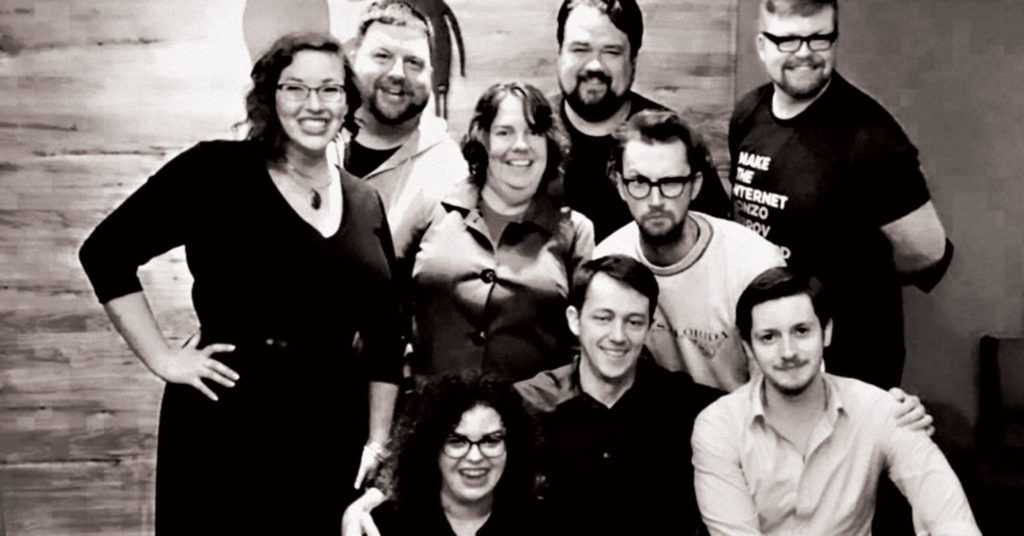 As the holiday looms over all of us, you might find yourself in need of a drink and a good laugh this weekend. Well, Friday night Gonzo Improv has you covered with their aptly titled “Night Before, Night Before, Night Before Gonzo-mas” at Four Pegs in Germantown. Having formed in the spring of this year, the troupe is somewhat new to the local improv scene. One of the founding Gonzo members, New Albany native, Brandon Saylor took some time to talk to us about the troupe, this show and the holidays.

LEO: What’s your least favorite Christmas tradition?
Brandon Saylor: My least favorite Christmas tradition is the whole month of January. Ugh. Paying the credit card bill. Christmas is great — it’s the Christmas hangover that’s a nightmare. But a tradition I like is that my wife and I always get new pajamas for Christmas. It’s funny, though, I always buy a full set — but I won’t wear the shirt. It’s too formal. I look too much like my grandpa or something. So I just have a bunch of pajama shirts hanging out at my house if you need any.

What’s the most embarrassing thing to happen to you on stage?
My fly has been down a lot. I’m really bad about it. I’m in constant fear. Anytime the audience laughs harder than I think they should at something I say. I always have to check to see if my zipper is up. I stick my foot in my mouth a lot, too. We ended a show with a game called ‘Serenade,’ one time. The whole joke of the game is that you sing two songs to an audience member, the first one is really sweet and romantic. The second song, you get really raunchy. So we brought this girl up, and I totally forgot the first song was supposed to be sweet and romantic. I literally sang two songs about this girl’s boobs. As it turned out, she was the girlfriend of one of the guys in our troupe. In addition, her father decided to come to the show that night. So I just sang two songs about my buddy’s girlfriend’s boobs in front of her father. That was awful.

Tell me about the show.
Well, it’s going to be in two halves. The first one we’re calling ‘Hark the Harold.’ It’s our turn on the classic improv game The Harold. It’s one of the oldest long-form games in improv. Some people even say all long-form games come from The Harold. So it’s very traditional. And then the second portion will be a game we invented ourselves called ‘A Gonzo Pageant.’ And it’s based around the old classic Christmas characters we all grew up watching. It’s going to be great. Come have a drink. We get way funnier when you’ve been drinking.

Really, does it make shows better when the audience has been drinking?
We encourage drinking. We want people to have a good time and enjoy the show. The shows are different. I think it makes it more fun, personally. When the audience is a little lubed up, the suggestions tend to get a little more suggestive.

Will you all be drinking?
Not specifically. But we did do a show once called our ‘Blackout Drunk-prov,’ where we did just that. We partied on stage with the audience. I don’t think we’ll go quite that far this time. The jokes get a little more flippant. I honestly don’t even remember the last game we played on that show. There are definitely some holes in my memory from that night. I had to take a roll call the next morning to make sure everyone was alive.

Besides the local connection, what inspired you all to name your troupe after Hunter S. Thompson?
First, it was the local connection. We wanted a name that when people heard it, they knew it was synonymous with Louisville. It came up when we were pitching ideas around. And then someone looked up the definition of Gonzo journalism. I wish I had it in front of me, but the definition of Gonzo, from an improvisor’s standpoint, is very akin to what we do. [Dictionary.com defines Gonzo journalism as: ‘journalism, reportage, etc. filled with bizarre or subjective ideas, commentary, or the like.’] •