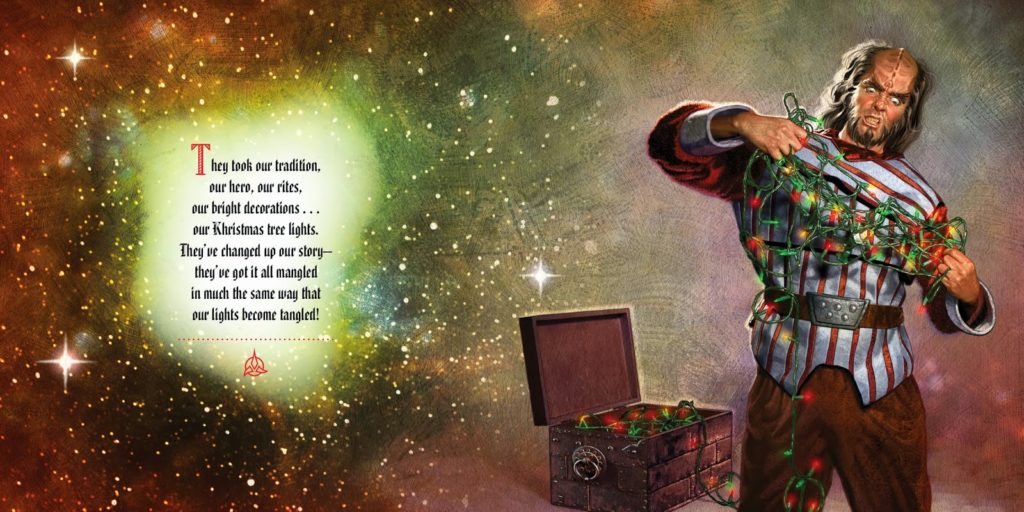 An illustration from the book "A Very Klingon Khristmas" by writer Paul Ruditis and artist Patrick Faricy.

Community Yoga
Tim Faulkner Gallery
$5 suggested donation  |  6-7 p.m.
The Kentucky Yoga Initiative, which says it strives to create “possibility and empowerment in each person’s life,” is bringing a community class to Tim Faulkner Gallery. This power yoga class will give everyone an opportunity to “stretch, build strength, have fun and empower your life!” If you don’t have your own mat, one can be borrowed at the gallery.

Still They Persist: Protest Art from the 2017 Women’s Marches
KMAC Museum
No cover  |  10 a.m.-6 p.m.
The day after Donald Trump was sworn into office, millions of people marched in the capital and in cities around the world. One thing is for certain — there were more people at the Women’s March on Washington than there were at Trump’s inauguration. KMAC is hosting a special exhibition of art from the Women’s Marches through Jan. 7. The movement has persisted, from U.S. Sen. Elizabeth Warren on the Senate floor to Alabama’s Senate special election. Visit and be inspired by the marches that started it all.

Games on Tap: Holiday Edition!
Great Flood Brewing Co.
No cover  |  6:30-11 p.m.
This weekly board game meetup is for tabletop gaming enthusiasts and novices. Arrive anytime, choose from over 50 games (classic and modern) or bring your own, grab your drink and settle in for some fun. At this special holiday edition, you can also enjoy a Christmas potluck. Everyone is encouraged to bring a snack or dessert, but it is not required. If you can’t make it to this game night, maybe read LEO’s guide to board games nights and tournaments in Louisville to find out about the other gaming nights in town.

Klingon Caroling in Louisville
Starting outside The Great Escape
Free  |  7-9 p.m.
Attention all Trekkies, this event is specifically for you. Klingon Xenomusicologist, j’onn, is hosting a night of Klingon caroling during the “Feast of the Long Night.” Carol books and a tutorial in Klingon pronunciation will be provided, and costumes are encouraged but not required.

Holiday Open House
Jefferson Memorial Forest
Free  |  12-3 p.m.
This is a great opportunity for the kids to enjoy the holiday festivities. Two story times will be followed by scavenger hunts for objects out of which the kids will create their own nature ornaments. Visitors will also receive a “Golden Ticket” to visit the animals in the Environment Education Center. Cookies, hot chocolate and coffee will be available to keep kids and adults alike warm and smiling.

Louisville Doula Project Presents: Catsmas! Launch party!
The Butchertown Social
No cover  |  8 p.m.-12 a.m.
The Louisville Doula Project is on its way to becoming a nonprofit, which means it’s time for a fundraiser launch party! For those that don’t know, a doula is similar to a midwife, someone who provides support to women before and after childbirth. If that sounds like something you want to support, this party is for you. It includes champagne cocktails, live jazz music at 10 p.m. and locally-made LDP art and apparel. Proceeds help LDP pay for nonprofit application fees, training materials and marketing, so that it can continue providing free doula support.

Sugar Coated: A Benefit For Coalition For The Homeless
Meta
No cover  |  9 p.m.-4 a.m.
Sugar Coated is a holiday, dance party with two ways to be a charitable: a) bring a coat or blanket for donation, or b) order something from Meta’s one-off menu, and a portion of the proceeds will go to the Coalition For The Homeless. Live music will be provided by DJs John Penn Browning, Matt Anthony, Mint, Kim Sorise, Narwhal, DS, JP Source, Ben, Alexander and Lil Cory who promise to keep things “festive, sparkly and jolly AF, with all vinyl sets!”