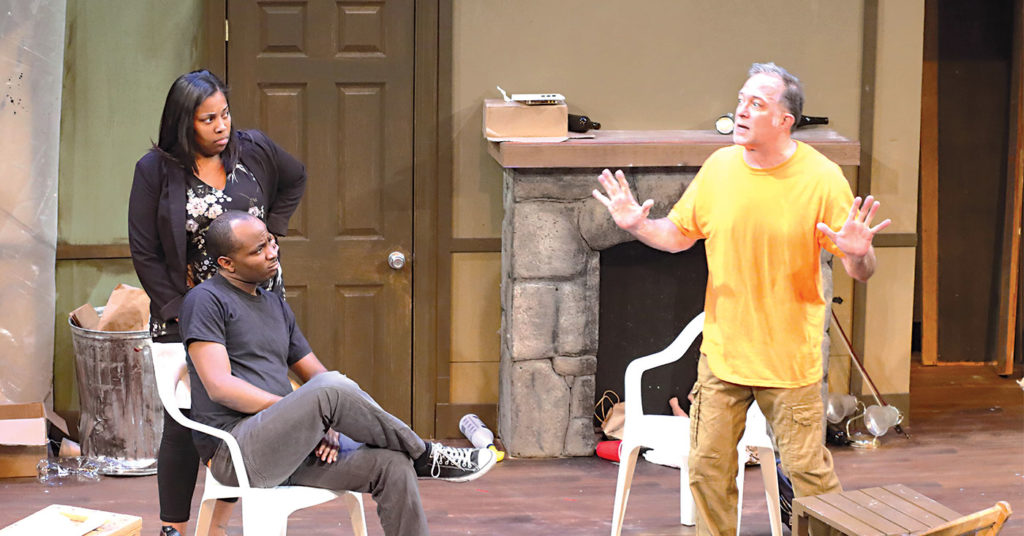 It used to be that February — Black History Month — served as a convenient chronological opportunity for events and artistic works with a focus on race relations in America. It was, for instance, one of the few times a year that an American president might think to mention that, “Frederick Douglass is an example of somebody who’s done an amazing job and is getting recognized more and more.”

Those days are long gone, at least in the world of theater, where playwrights and producers are tackling issues around race (and class and gender and other contemporary topics) year-round, with energy, intelligence and passion.

Both draw inspiration from works that first appear in the mid-20th century. “Clybourne Park,” by Bruce Norris, is a direct response to Lorraine Hansberry’s seminal 1959 play “A Raisin in the Sun.” “Carefully Taught,” by Cheryl L. Davis, isn’t explicitly related plot-wise to the 1949 Rodgers and Hammerstein musical “South Pacific,” but it draws its title — and its guiding ideas — from the play’s brilliant musical critique of racism, the song “You’ve Got to Be Carefully Taught.”

“Clybourne Park,” directed by Tony Prince, begins by exploring the flip side of “A Raisin In The Sun.” Put simply, Hansberry’s play is the story of a black family in Chicago (a family much like the playwright’s own) that plans to move into a white neighborhood. The events of the play turn on how the family responds when a representative from the white enclave offers to pay the family to abandon its plans.

The first act of “Clybourne Park” is set in the home of the white sellers, Bev and Russ, played here by Heather Green and Tony Prince. As the play opens, Bev and Russ are preparing to move — ostensibly to spare Russ a long commute to his job.

But Bev’s brittle cheer and Russ’ volatile outbursts hint at a mystery to be revealed. As neighbors drop by — a minister (David Galloway) and Karl Lindner and his deaf wife (Ryan Lash and Katherine Martin), secrets are revealed and tensions rise. We learn that Russ and Bev are dealing with a devastating family tragedy. And we learn — via Karl, whose character also appears in “Raisin” — that unbeknownst to Russ and Bev their realtor has sold the house to a black family.

And that revelation leads to a fiery scene that finds the white neighbors battling over values (property values vs. moral values) while pulling in Bev and Russ’ black maid, Francine (Michala Smith) and her husband, Albert (Tyler Madden).

The logic of the scene is remarkable — and the acting is even better. It’s no easy task for theater to weld intellectual rigor and emotional power into a single powerful statement, but Prince and company pull it off.

In the second act, the action jumps ahead 50 years — to what is now the decrepit remains of the Russ and Bev’s home (Eric Allgeier’s scenic design for both halves of this play is brilliant). During the intervening decades, the neighborhood has morphed from a white enclave to a tightly-knit African-American middle class neighborhood, to a drug- and crime-infested poor neighborhood — and now is in the throes of gentrification.

The same cast members now return in new roles. I won’t recount them here, for space reasons, but the transformations — both in terms of acting craft and costume design (by Lindsay Chamberlin) — are superb.

The second half focuses on gentrification through the lens of race, class and property rights. The tensions and arguments are familiar enough. Rising property values force lower income people out of their homes. Neighborhood associations want to preserve the architectural and social integrity of their communities. New buyers want to exercise their rights to modify their new homes to suit themselves.

Here, those battles play out in a satirical depiction of a wildly dysfunctional meeting that brings all the parties together. It’s not great writing: What Norris gives us here is a thin, overly long depiction of what happens when you gather a group of self-righteous folks in a single room and let them have at it. But the actors have plenty of fun with it.

And at the very end, one of the lingering mysteries from the first act is resolved in a beautiful and satisfying scene (with deeply effective lighting and sound from Keith Kimmel and Richard McGrew) that once again pulls you deeply into the emotional world of the play.

The premise: two teachers, one white and one black, enjoy a rich, deep friendship with one another. They teach the same subject in the same school. They have shared important life experiences over many years. Their daughters are great friends. And by every measure both of these women (played by Ebony Nolana Jordan and Jennifer Thalman Kepler, who also play one another’s daughters) are both excellent teachers.

When budget cuts require the elimination of a position, the school principal discharges the white teacher (and states that he’s doing so in order to preserve the diversity of the faculty).

Friendship notwithstanding, the white teacher views this as an act of racial discrimination and decides to fight the case.

In the hands of a lesser writer or less talented cast, this might play out with the sterility of a case study, but this production is fantastic. Some of the scenes — like a fine simulation of a cable news show shouting match — are marvels. Great acting in the two central roles is bolstered by superb character acting from Jay Padilla and Phil Lynch in multiple roles. And Scenic Designer Scott Davis makes excellent use of the Kentucky Center for African American Heritage for the set. Talk-back sessions are scheduled after the Friday and Saturday night performances.  •