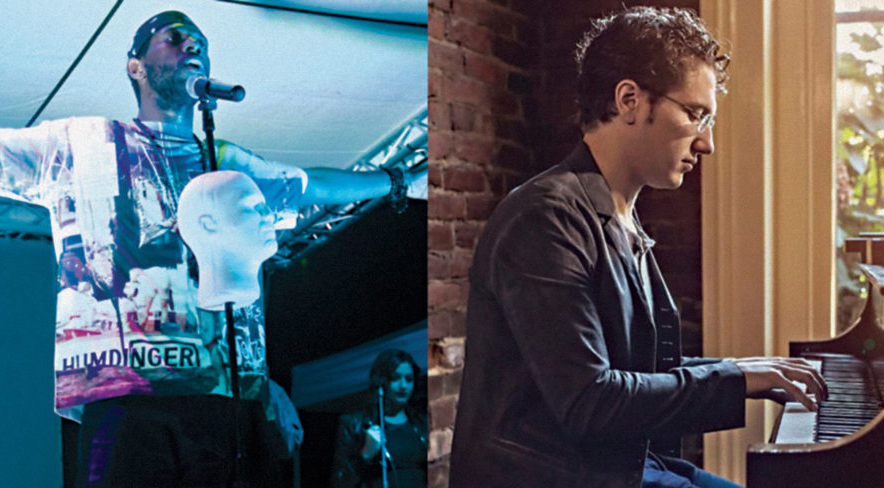 The Louisville Orchestra recently released its first album in almost 30 years, All In. We asked local musician Jecorey “1200” Arthur to interview LO Conductor Teddy Abrams, as the two have frequently collaborated in the past and share a love for classical music.

Jecorey Arthur: As a percussionist I’ve recorded many times with small and large ensembles. The process is almost always the same — read through sections, record multiple takes and an engineer splices them together. What was the process like for recording with the Louisville Orchestra?

Teddy Abrams: Creating an album with an orchestra is unlike any other type of recording. There are two ways of doing this -— live or in a ‘studio.’ The vast majority of modern orchestral records are made from live concerts with a short 30-minute ‘patch session’ to fix any mistakes. We opted to make our record in studio sessions, which provides much more flexibility for repertoire and reflected the eclectic range of music we selected. Because we are a unionized orchestra, this means that we followed a voluminous and byzantine set of rules that govern every element of the recording process — from exactly how many seconds a break can be to precisely how a solo passage can be mixed into the finished product. It’s an intense environment somewhere between a Kubrick movie set and a NASA rocket launch, but in the end everyone learns a great deal about their colleagues and about themselves as artists and about our collective capacity to make great music.

One of the unique elements of an orchestral recording session is that the producer completely runs the session. Our producer, Blanton Alspaugh, is a multiple Grammy-winning superstar, and his job is to make sure that we get all the takes we need in a very limited amount of time. Most bands can simply play a song over and over again in a recording session, often thinking about the product for a few days or weeks and come back to re-record the same song. We had just a few hours in two sessions to record a full album — that means we all trusted Blanton’s judgment about our priorities for our remaining time. The vast majority of orchestral music is through-composed — there aren’t any looping bass lines or choruses found in most popular music — so we have to get great takes of every second of composed music. We can’t go into the editing process and restructure the compositions, but we can make as many as 20-30 micro-adjustments and splices per minute of music as we edit and mix the album.

If we had unlimited time, I would have loved to experiment with a solo section in the bluesy third movement of ‘Unified Field,’ plus I would have preferred not to record the Copland Clarinet Concerto all in one day — my mouth was comically bleeding by the end of the sessions from so many takes of playing the clarinet during the high, sustained, soft opening of the work. However, I’m most proud of the intangible sense of accomplishment that was shared by the full orchestra as we realized we were returning to a medium that once made the Louisville Orchestra an international brand in the 1950s to 1980s. It felt like we were re-contributing — in a small but meaningful way — to our role in American musical history.

My favorite classical repertoire has symbolism layered throughout the instrumentation and orchestration. Example: ‘Music for Prague’ by Husa, which the LO recorded many years ago, was composed to memorialize events in Czechoslovakia during the late 1960s. It uses flute ostinati to symbolize birds chirping and freedom; snare drum licks are used to symbolize marching soldiers; brass fanfares are used to symbolize sirens and the chaos of militant takeover. What kind of symbolism exists within the repertoire on the All In album?

The majority of allusions and symbols in the album occur in my piece, ‘Unified Field.’ While I don’t reference very many sounds that occur outside the musical sphere, I tried to create a piece that binds together as many styles of music that I can fit into a cohesive whole. Ideally a listener would hear consistent structural themes throughout the piece while recognizing a kind of magically-quick transition from classical music to Latin jazz, blues, bluegrass, klezmer, Renaissance counterpoint, and more. For me, the symbol of music being a unifying, global language is one of the most inspiring and potent elements that a composer and creative musician can explore.

You’re widely known for being a collaborator with no limits. If you could bring back a composer or musician from the past to collaborate with a present day musician or composer, what duo would you choose and why? What do you believe they would create together?

Jecorey, I would love to see what would happen if we put you in a room with Igor Stravinsky and said ‘create the music of the future.’ Stravinsky was one of the most curious, adaptable artists in Western culture. He absorbed the changing musical landscape of the 20th century in a remarkable and honest way, and he redefined what concert-music could be on multiple occasions. As you know, I have a deep respect and love of rap, and a particular love for the power of your own charismatic performances combining word with musical art. I think the two of you would come up with something that we would very much need to record.

I’ve worked with plenty of collaborators that share your mindset, but also with purists who are not open to collaborations or “compromising” classical music. What was your biggest moment of adversity with a purist? How did you handle it and how did it affect you as a classical musician?

The musical world is enormous and exceptionally diverse. For many generations classical musicians were not encouraged to improvise, play popular styles of music or focus on the community and educational opportunities of the art form. This is certainly understandable — to achieve command of an instrument and to build a successful career as a performer is extraordinarily difficult and requires a singular focus, drive and compulsive dedication. However, human cultural history has a way of charting a path that rewards those who innovate, grow and question the expectations of art. Often the conservative nature of compulsive mastery of an acoustic instrument runs opposed to the demand by the people for the creative and the reimagined. I have tremendous respect for both elements — the musicians who have dedicated their lives to their art and also the audiences whose 21st century interests are broad and diverse beyond imagination. My approach is to treat all with a kind of artist’s love. Through the passion that is born of this love for both the art and the people comes at least the possibility to forge new connections, paradigms and even communities.

What identity do you believe the LO has compared to other professional symphonies in the world? When Teddy Abrams retires, hopefully here at the LO, what do you want your legacy to be with this orchestra?

I hope that the Louisville Orchestra represents our city as the great town we know it to be — filled with passionate and compassionate people, populated with creative individuals and institutions, and a place when a person can be, or become, whoever they wish to be. I don’t worry about other cities and their orchestras, although I am intensively rooting for the entire symphonic world to succeed in America. Instead I focus on our city and our community. I believe, and have repeatedly witnessed, the power that an orchestra has to bring a city together and inspire a mutual understanding of life, both on our lonesome singular paths and as a complex society. I hope people will remember this era as one in which we did everything possible, every single day, to create those experience for our fellow citizens in Louisville. •

Go to louisvilleorchestra.org to purchase “All In,” the Louisville Orchestra’s first album in 30 years.