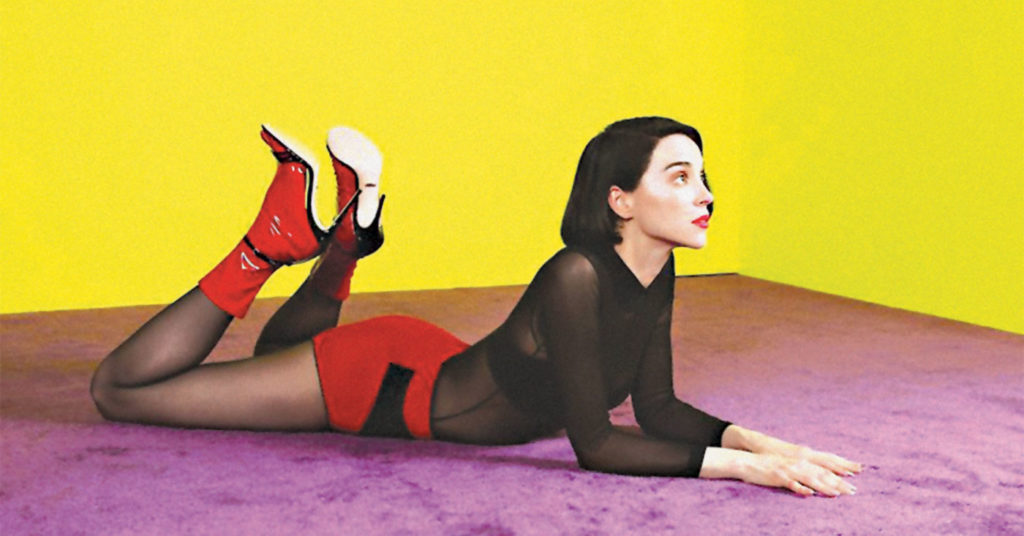 If the first five albums from St. Vincent (the moniker of Annie Clark) didn’t convince you that she was one of the most important artists of our day, the recently-released Masseduction should have sealed the deal. Balancing huge hooks with unannounced detours, both musically and lyrically, it’s at once one of the catchiest and craziest records of the year. We caught up with Clark to talk about the road, her new album and celebrity culture.

LEO: With as much touring as you did behind St. Vincent, and everything else in your life, how were you able to stay this creative, having to constantly be on for the past few years with what looked like little break?
Annie Clark: You know, you just have to carve out the time. I finished touring in the St. Vincent record in fall of 2015 and I started writing immediately, which is my way, because I realized I actually don’t know what I think or feel until I write it in some way, be it an essay, or a song. So, that was something I needed to do right after I stopped touring, because I wasn’t sure how I felt about any of it. And I made a short horror film, which I think really it was just so nice to do something else, frankly. I guess I’m a person who has always enjoyed work more than fun.

You also teamed with Ernie Ball Music Man to create a custom guitar, which really highlights the line on the record where you say, ‘I hold you like a weapon.’
There is a lot of guitar. It might not sound exactly like guitar. I mean, I’ve always done that, where guitar has been a little ‘come to the looking glass.’ At the live show I’m playing constantly. People just might not recognize it as guitar. That doesn’t bother me.

I feel like this is one of the most poetic records that you’ve ever done.
I spent so long making sure that every word was right. The creative process, it’s mysterious to me. These things emerge in you slowly, but surely have this cohesive work that all interlinks with each other. The song, Masseduction, more or less brings out all the characters that you meet in record. “I can’t turn off what turns me on,” might as well be the thesis in the record.

How about the line, ‘What a bore to be so adored’?
I was thinking about Brian Eno and Here Come The Warm Jets, where he sings ‘Oh, what a burden to be so relied on.’

You grew from a cult rock icon to being part of celebrity tabloids. That’s gotta be weird.
What’s strangest to me about the whole celebrity culture thing is that aspect of wealth aspiration, and fame aspiration. That bums me out because what it says to me is that we as a culture, and we as government, have not taken care of our people, because I think if people were happier, more contented…it wasn’t just the corrosive side of capitalism all the time…then there wouldn’t be these false idols.