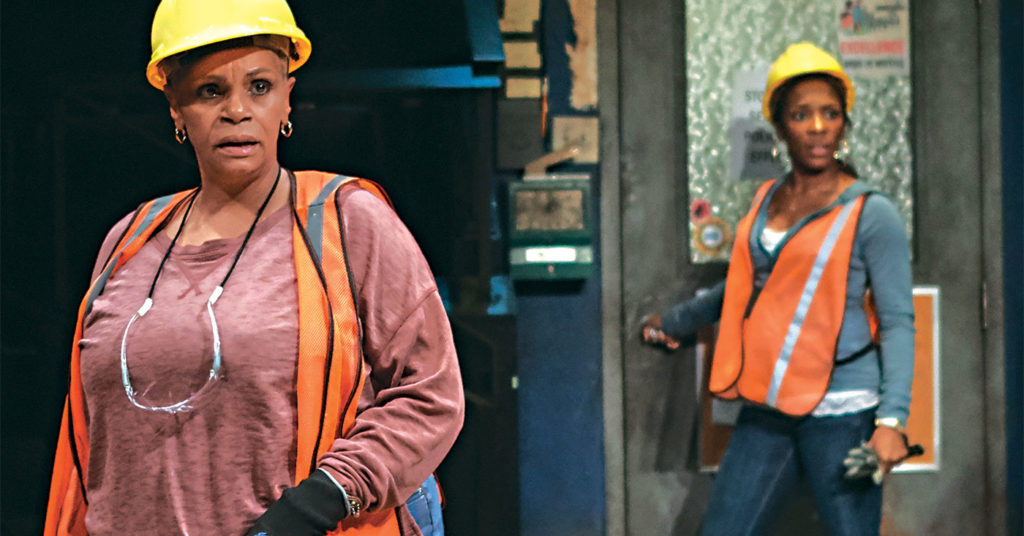 “Creative destruction” is the term economists use to describe the implacable forces that drive change in the worlds of business and industry. Cornfields are plowed under to make room for factories. Carriage makers give way to auto factories. Supermarkets replace corner groceries. Coal is replaced by natural gas. Firms move jobs to low-wage states and countries.

In lecture halls and textbooks, the “creative” part is what matters. The creative process yields innovation, net gains and a rising tide of prosperity that benefits most of us. So it’s easy to discount the destruction of decrepit buildings, outdated technologies and under-skilled workers.

In the abstract realm of economic models, this is reality and the numbers don’t lie.

But there is another reality, of course. The lived story of those whose lives are uprooted in the wake of all this creative destruction.

Dominique Morisseau’s bristling blue-collar drama “Skeleton Crew,” which opened last week at Actors Theatre of Louisville, plunges us into that reality. “Skeleton Crew,” the third installment in a trilogy of plays that Morisseau has set in Detroit, takes place in a stamping plant in 2008 — at a moment when yet another economic hammer is falling on the workers of that long-beleaguered city.

It’s a universal story, but Morriseau’s script is rooted in a sense of time and place. The technical work of Michael Carnahan (scenic designer), Shilla Benning (costumes), Alan C. Edwards (lighting) and Justin Ellington (sound) place us firmly in the gritty world of a factory break room at a moment when lockers plastered with the face of Barack Obama were beacons of hope in the face of a looming economic crisis.

And led by Director Steve H. Broadnax III, the actors who inhabit this world infuse the story with the authenticity of a lived experience.

There are four characters. Faye (Madelyn Porter) is a senior employee with vast experience and a role in the union. She’s been on the job for 29 years — just short of the 30 she needs to ensure a good retirement package.

Dez (Dexter McKinney Jr.) is young, volatile, flirty and entrepreneurial. He knows the plant won’t provide him a lifetime of employment — but he’s hoping to work long enough to start his own shop.

Shanita (Patrese D. McClain) is young, single, pregnant — and smart as a whip. She’s the sort of woman who finds philosophical insights in things as mundane as highway congestion — and one of the central points of the play is raised up when McClain launches into a funny, impassioned speech about the importance of merging, an act most of us deal with on a daily basis.

Then there is Reggie (Anton Floyd). He’s traded his blue collar for white and now wears a necktie. He carries the burden of balancing his responsibilities to management against his love and understanding of his workers.

All around this group, the ground is shifting. Plants are closing. Staff are being pared in other departments. Someone is stealing materials from the plant. For each worker, the dilemma is how to survive as long as possible without compromising personal dignity. For Faye, the solution seems to be small acts of insubordination — like smoking a cigarette as she stands next to a no-smoking sign. For others, the tactics are love and anger, acts of denial and moments of truth.

As the action progresses, interludes between scenes feature dance by an ensemble (Steffan Clark, Alaina Kai and Terrance Smith) whose hip-hop-laced dance moves, designed by movement director Safiyyah Rasool, invoke the rhythms of a factory floor.

As the economic noose tightens on this close-knit group, who revel in the noble value of their work, Morisseau delves deeply into the personal realities of these folks. And though the play doesn’t flinch from its reality, in the end, there are still flashes of hope and inspiration.

Its two weekend run is over, but The Chamber Theatre’s recent production, “Tales From the Hills,” deserves a mention. The production paired two Irish short plays that in these parts are rarely if ever seen: W.B. Yeats’ “Deirdre” and J.M. Synge’s “In the Shadow of the Glen.”

The company, which has carved out a distinctive niche around late 19th- and early 20th-century drama, mounted the production in a new (to theater) venue: Hope Community & Coffee at the Mellwood Art Center.

Both plays were superb. “Deirdre” is a dark, bloodstained drama about a woman (Hannah Connally) whose love for Naoise (Tony J. Harris) leads her to flee the Conchubar (Sean Childress), the lord to whom she is betrothed. She is succored by sympathetic folks: Fergus (Rena Brown), a musician (Clare Hagan, whose gorgeous voice is featured prominently) and a Seanchai (a narrating bard, in the Irish tradition) played by Cate Willard. The cast was filled out by two messengers (Everett Broadbeck and Gerry Rose).

Structurally, Yeats begins the play with what amounts to backstory. We learn what has happened, meet the hopeful young lovers and her rumors of Conchubar’s wrath long before he takes the stage. But when Childress swaggers in with his masked retinue, the play takes on a sudden muscularity. Under Martin French’s direction, the action was as crafted as Yeats’ text.

Polina Shafran directed the droll, though still provocative, “In the Shadow of the Glen.” At the outset the body of the apparently deceased Dan Burke (Rich Williams) is laid out and shrouded, ready for burial. When a tramp (Gerry Rose) arrives at the door, Dan’s wife Nora (Marcy Ziegler) invites him in. She offers him a dram, flirts a bit, then asks him to hang around and watch the body while she goes out into the glen — to meet Michael Dara (Vidalia Unwin) who is roaming about. As it turns out, Dan’s death is a pretext — and when he discovers that she has a romantic eye for Dara, a comic confrontation ensues. This is The Chamber Theatre’s third season. In the spring, they’re producing a program drawn from Chekhov stories that are somehow united by characters who sneeze. If you know Chekhov, you know this is not a thing to be taken lightly.

For information about The Chamber Theatre, connect at thechambertheatre.com. •