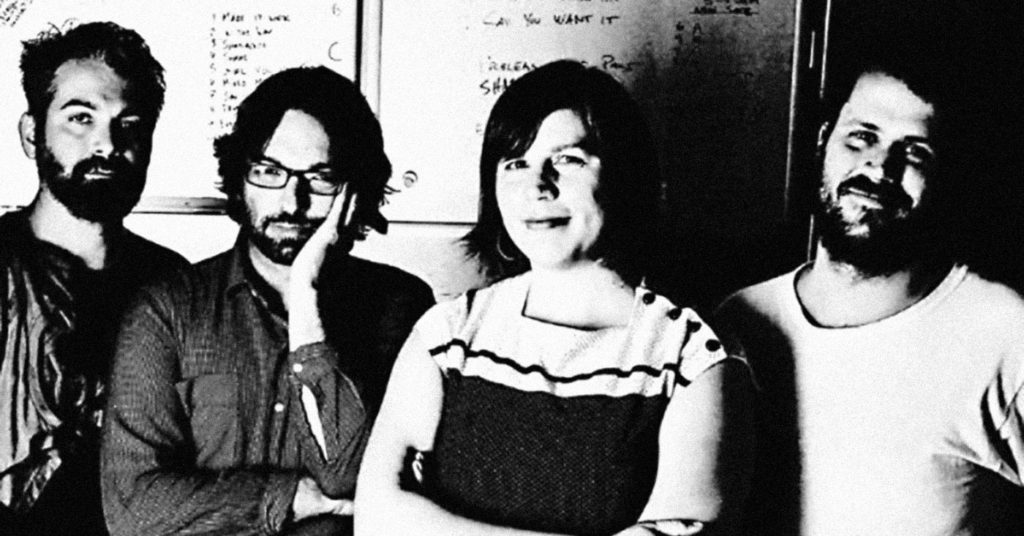 Second Story Man formed in Louisville in 1998. Three founding members — Evan Bailey, Jeremy Irvin and Carrie Neumayer — are still performing in the band, with the addition of Drew Osborn (Old Baby/Your Black Star). In their nearly 20-year history, they have released three full-length albums, two EPs and an 18-song retrospective, as well as several singles and contributions to compilation albums. Their eponymous third album was produced by Kevin Ratterman at La La Land Studios and released on Oct. 20 on the Louisville label Karate Body Records. We caught up with them before their show at Zanzabar this weekend to talk about what’s kept them together, and how their new album was inspired by The Jesus and Mary Chain’s 1985 debut record, Psychocandy.

LEO: In the spring of 2018, Second Story Man will reach its 20th year. How does reaching two decades feel?
Carrie Neumayer: Moving into the 20th year of SSM feels great. It’s amazing to me that after all this time, we still have a musical connection and a friendship. It’s kind of remarkable that we’ve grown up together and then gone in different directions with our lives, yet still have this project that is important to us and keeps us coming back.

How do you account for the longevity of the band, especially with the same founding members?
Evan Bailey: We are all great friends, I think that is a big part of it. And we all trust one another. And we all trust one another in terms of what we bring to the table. There have definitely been tensions at times in the band’s career, but we have always been able to talk things out. It’s all about communication.

Jeremy Irvin: It is just like the old adage: In a good marriage, the key is communication. I think we are all able to address what we need and what we want from the band and find a middle ground on what works for everybody. It has been a pretty democratic process, which is kind of hard to do in a band, but when everybody has equal input, and everyone’s ideas are heard, we all feel equally invested in it. I think a lot of bands are centered around one or two leading identities and other roles are kind of told what to do, and I think that has a lot to do with battling egos. But, I don’t think we have ever had issues with that.

Communication is key, but so is space. You guys did take a break for a while.
EB: I think we just needed a little time to figure out what we wanted to do.

JI: Yeah, I sat down with Carrie and Evan one night and said I didn’t think I wanted to do this anymore. And they talked me into a compromise like, ‘Why don’t we try something totally different?’ And we did and it has been totally awesome.

So this might account for the big change up about five or 10 years ago, when everyone swapped instruments and kept going?
EB: Yeah, I guess after about 15 years we were not going to continue as a band unless we decided to have a big change up like that. The plan was to drop all of our old material, which is somewhat bittersweet depending on who you talk to, and our buddy Drew Osborn came on-board.

I have definitely heard moments on the new album that have reminded me of past Second Story Man offerings, but it definitely felt like there was a change. Your earlier work, like on Pins And Needles, reminded me of late ‘80s and early ‘90s indie rock, when there were a lot of bands with equal numbers of men and women harmonizing and singing together. On the new album, you have a sound that is even further back than that — driving bass, distorted guitars and a lot of reverb on the vocals. That reminds me of Jesus And Mary Chain.
JI: We were really going for that. These songs are very groove oriented, and I feel like the bass and drums have a lot of driving elements, and we incorporated those elements into a Psychocandy-type production. So we went to Kevin [Ratterman] and said ‘We want to do a modern Psychocandy.’

CN: I do think that we used to be a bit all over the place, stylistically, but our songs always shared a pop sensibility with a hint of darkness. I think those elements remain, but our sound is bigger, fuzzier, heavier and more consistent across this record. •