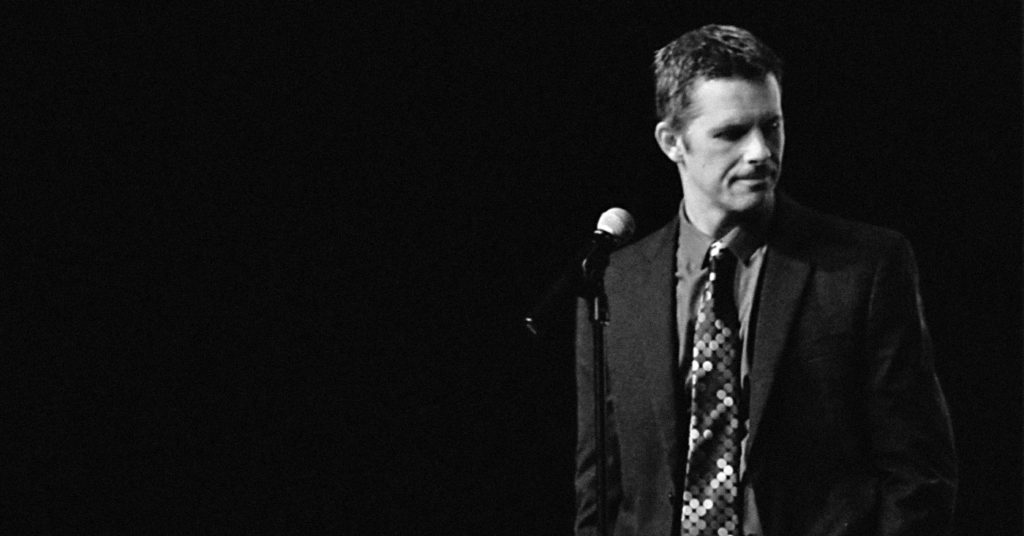 “Comedian. Author. Idiot.” That is how comedian Nathan Timmel describes himself. Timmel is an unrepentant, former class clown whose comedy is dark and sarcastic with, according to him, a few “high-brow poop and fart jokes.” He has recorded five albums and performed before military audiences nine times, including in Iraq and Afghanistan. He wrote two books and published several short stories. This month, he releases his third book “Hey, Buddy… Dubious Advice From Dad.” We finally spoke with him after a potty-training emergency delayed our interview several minutes.

Nathan Timmel: Sorry about that. The little bastard pees like a champion. Five minutes later he decides to crap his pants. He’ll sit on the potty to pee but poop has to go everywhere.

LEO: No problem.
Oh, wait. Now he’s sharing his lollipop with the dog. Oh, the dog’s licking it. Yep, and now it’s back in my son’s mouth.

Let’s start with what inspired you to do comedy.
The most honest answer is: disrupted childhood. I moved 10 times before I was 10 years old. Comedy was a mechanism I used to either make friends, or cope with losing the ones I had once we moved. Everything became a joke to cover up everything else I was going through.

Why did you move so much?
My dad got fired a lot. When I was growing up he was always like: ‘This manager is a bastard.’ Or ‘This guy’s a terrible person.’ As a kid you just kind of accept it for what he says. But when you become an adult, you look at it and go: ‘Wait a minute. The common denominator between all these jobs is you, dad.’ He didn’t play well with others.

So you’ve always been funny.
Yeah. I was the class clown. In seventh grade, they got so tired of me being a goofball, or fuck up, if you will. The second half of the year, I had to eat my lunch in the office. I was just so consistently bad they didn’t even want to give me the opportunity to fuck up.

Where did the idea for ‘Hey, Buddy’ come from?
It’s a series of letters to my son talking about where I’ve gone wrong in my life. In one of them, I explicitly tell him, ‘You are not going to be a comedian. You are going to get a degree. You’re going to get a real job. People will always need accountants. I’m not sure they will ever need comedians.’

Did becoming a father change your sense of humor at all?
I was very worried about that. I was always a cold, dark bastard. The instant my daughter was born I became this huge softy. I was like: ‘Oh my god. I have emotions now. I have feelings. This is going to ruin my comedy.’ What I found is that you can have feelings and still write sarcastic and dark jokes. So I’m not the fluffy-bunny guy on stage like: ‘Hey everybody, I’m a dad. Aren’t rainbows wonderful?’ I remain evil, but in a good way. Where people can watch and say, ‘Yeah, he’s going to hell. And I’m going to laugh at his descent.’

When you look at the world, does it scare you that you’re going to have to explain this stuff to your kids?’
If I let it get to me it does. But then I think it’s always been like this. We’re just hyper-aware of it now. But it was just as scary in the ‘80s with Reagan and the Cold War. Before that with Kennedy and the Cuban Missile Crisis, when we really thought we might be going to nuclear war. And before that with polio, before we cured that. And there were all these other diseases that could kill your kids. Do you live in fear or do you just go about your life? Like Sting said, ‘Too Much Information.’

You talk about music a lot. Is that something that inspires you?
If anything, it depresses me. I think: ‘I should have been in a band.’ Bands get to travel the country playing the same songs every night, every year to the same people. Not comedians. You hear a joke twice, you get tired of it. You hear a song 10 times, and you love it more and more.

Your material is smart and requires people to think a little bit. Is that intentional?
Not really, it’s just how my brain works. I trust you all to think. I don’t need to spell everything out for you. I’m not just going to pander by standing there and telling poop and fart jokes. I mean, there are poop and fart jokes in there, but they’re special, high-brow poop and fart jokes.