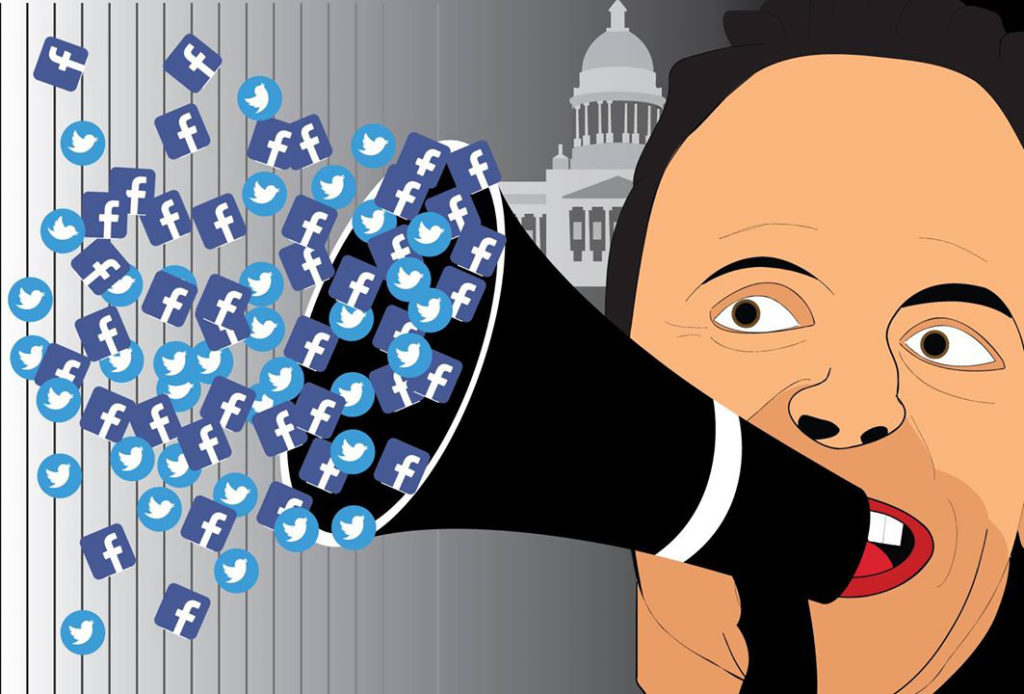 [Ed. note: The controversy over Gov. Matt Bevin’s blocking of critics from his official Facebook page and Twitter feed has left many wondering: What are our rights as Kentuckians? Two lawyers from the law firm Frost Brown Todd spell out a precedent and wherefores.]

With the rise of social media as the modern public forum for speech and debate, a veritable legal minefield has been created for elected officials who run social media accounts.

Elected officials may believe their personal social media pages have little to do with their governmental roles, but more and more constituents are posting comments to these pages to voice concerns on public issues. Once an elected official’s social media page is opened for political discussion, it is transformed into a public forum for speech and debate, instantly granting every user a First Amendment right to speak his mind in the comment section.

It may have been OK to delete a profane comment or to block a rude Facebook friend before, but now that same act could be a constitutional violation. Highlighting the urgency of this issue is a complaint filed last month in a federal court in Ohio, alleging that a Hamilton Township trustee violated the First Amendment rights of several constituents by banning them from his Facebook page.

Although the Ohio federal case is still in the early stages of litigation, a Virginia district court was faced with a similar complaint in July of this year. In Davison v. Loudoun County Board of Supervisors, 227 F. Supp. 3d 605 (E.D. Va.), a county resident posted a comment on the Chair of the County Board of Supervisors’ Facebook page, claiming corruption within the County School Board. The Chair of the Board in turn blocked the resident from accessing her Facebook page.

The resident sued, alleging that his First Amendment rights had been violated. The court ruled in his favor. To determine whether the account was purely personal or governmental in nature, the court examined how the Defendant used her Facebook page.

Some factors indicated that the Facebook page was private, and not governmental:

— The defendant’s official duties did not include maintenance of a social media website.

— The Facebook page was not going to revert to the county when the Defendant left office.

— The defendant’s social media activity generally took place outside her office and outside of normal working hours.

Other factors weighed in favor of finding that the Facebook page was governmental in nature:

— The title of the page included the defendant’s official title.

— The page included the web address of the official county website.

— The impetus for creating the page was the defendant’s election to public office.

— The page was used by the defendant to hold conversations with constituents and to promote attendance at events related to her work as chair.

— The defendant had submitted posts on behalf of the County Board of Supervisors as a whole.

The court eventually concluded that the “governmental factors” outweighed the “private factors.” Because the Facebook page was governmental in nature, the court held that it was a public forum for speech. Accordingly, the defendant had violated the Plaintiff’s free speech rights by banning his access to post on the page.

What You Need to Know

If an elected official chooses to create a social media account to reach out to constituents, the best practice is to keep this account completely separate from any personal accounts the official may also maintain.

It is important to note that, even in the context of a public forum, the right to free speech is not without limitation. Social media accounts that are governmental in nature are permitted to have policies limiting speech, so long as these policies are content-neutral and viewpoint-neutral. That policy should be clearly outlined on the account’s page. •