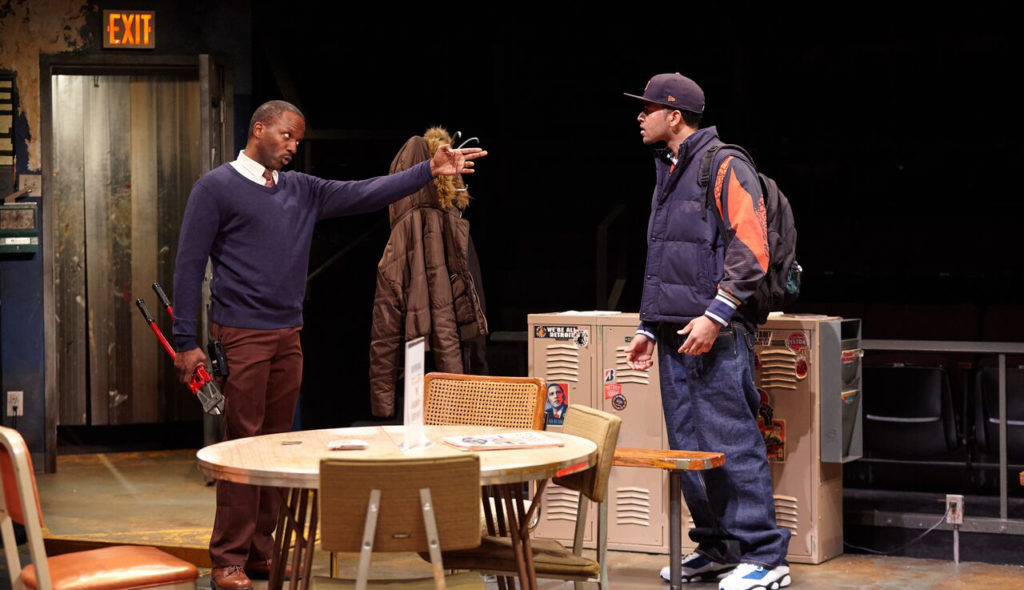 Out past Interstate 264, tucked away in an office park, is Safiyya Dance Company, where co-owner and founder Safiyyah Rasool is just finishing up class. Young dancers anywhere between teenagers and toddlers thank Rasool and give her hugs before they run out to meet their waiting parents.

The walls are adorned with inspirational posters, and a  couple of first-place championship banners. Rasool, 37, is confident and in control of her domain, watching the kids for the next class stream in and start warming up.

A few days earlier, I saw Rasool just as in control in another realm. She’s the choreographer of Actors Theatre’s current offering, Dominique Morisseau’s “Skeleton Crew.”

Skeleton Crew is a story of a few desperate workers, set in an automobile factory at the height of the Great Recession. The small cast, just five characters, keeps the drama personal. But, in between scenes, and in other moments of transition, a crew of hip-hop dancers comes onstage — popping motions alternate with fluid steps, painting a highly-stylized picture, not only of the movements of a factory and the lives of the people who work in it, but also the desperation felt by workers whose way of life is disappearing.

Actors Theatre is miles away from Rasool’s studio, and sometimes the difference between downtown and The East End can seem like a whole different world. There is also a huge difference between the world of a dance studio aimed at working with kids and a world-class theater company like Actors.

The rehearsal room at Actors is well-loved, with tape on the walls, old mirrors and scuff marks on the floor. The hours of the day are taped up around the room, one through 12, which is actually a tool used to help discuss blocking in the Bingham Theatre.

“We’ll run this one more time,” Rasool says to her three dancers.

With her hair in dreads and wearing an Adidas track jacket, Rasool looks ready to drop moves — she’s got that coiled-spring look most dancers have when their not actually dancing. It’s the end of a long rehearsal, and the three performers in the space look tired, but they are going all in anyway.

There’s Terrance Smith, a Cincinnati native who’s got an authentic look to his movements, and later admits he’s never been in a play before.

There’s Steffan Clark, who’s just a little bit smoother. He’s from Owensboro and is used to being on stage. In 2015, he actually auditioned for Actors’ apprentice program, but wasn’t accepted. He calls working on this show “a dream of his,” which he’s harbored for a long time.

Rounding out the trio is Alaina Kai, one of this year’s apprentices, and, despite that fact, Kai had to show up, audition and win her part, just like Clark and Smith.

The three move in unison in some moments; in others they interact with each other. At the end the dance they exit the stage — in this case still a rehearsal room. Rasool focuses in on that exit.

“What’s your attitude while you walk off?”

It’s not a rhetorical question. She talks to each dancer in turn, discussing the emotional journey that their character is going through, and how that interacts with the factory’s impending closure. She peppers in comments about the steps and the quality of movement they should have.

Then she tells the dancers to run through the segment one more time, not surprising to anyone who has spent time in a dance studio. There’s almost always one more run-through after the the first time the choreographer says “last time.”

“We’ll run this one more time then call it, cause it’s about time to be at my next spot.”

The beat starts back up, and you can see the changes in the dancers’ performance, both emotional and technical, as they apply Rasool’s notes.

This time, almost immediately after the run through, she rushes off, not surprising for a business owner who has to tend the fires at the studio, which include dozens of dancers.

There and back again

Back at Safiyya, Rasool is teaching a class of younger kids. I can’t stick my head in without interrupting class, so I sit outside, and meet some of the folks waiting for class to start.

Before I can chat with anyone, a woman named Venus Ludlow pops her head out of the office to see who I am, and, after confirming that I’m the reporter she’s expecting, she heads back into the office to do a little paperwork.

The waiting room starts to fill up with kids and parents waiting for the next class to start.

One young mother, Cori O’Neil sits down with her daughter Chyann, who is about 8. Chyann’s pretty shy when I ask her about taking class with Rasool.

“I take technique and hip-hop and ballet, and I’m on the competition team,” she says. “I’m going to compete later this year.”

That’s a pretty big deal for Chyan. She had been dancing at another studio up until April of this year, but was considering a change. When the two saw a team of Rasool’s students perform and win in a competition, it sealed the deal. While most kids who take dance won’t grow up to have any kind of career in the field, it’s still fiercely competitive.

Ludlow pops out every once in a while, to welcome the parents, hug the kids and handle any business matters that come up.

She’s actually the co-owner of Safiyyah Dance Company, but down plays her role: “Safiyya is the artistic, the creative, the important side of us being open. I try to make the numbers line up.”

Ludlow has been helping Rasool out since she started teaching in 2007, but officially came on as a partner in 2012 when the company moved to its current location.

As she continues to greet people, asking them about their day and give out hugs, it’s pretty obvious that she does more than keep the books, and it’s reflected in her answer when I ask her if the double duty ever makes her tired.

“It doesn’t feel like work because of the fulfillment I get from watching the kids,” she responds.

It’s a truth that doesn’t always get highlighted — that a lot of successful artists out there couldn’t do what they do, without the support of someone who’s savvy with the balance sheet.

After class finally lets out, Rasool sits down to talk for a moment.

Unlike a lot of professional dancers, many of whom start out as toddlers at dance schools like this one, Rasool didn’t start dancing seriously until she was in college.

“I was more of a street dancer, probably back to 5 years old,” said Rasool.

But she performed and danced, noting there are probably a lot of videos of her performing to Janet Jackson, though she declined to share them.

Then, while in Atlanta in here early 20s, Rasool starting taking class, and decided to take dancing more seriously. She laughed, remembering the rigor taking her by surprise: “I did not even know what I was getting into.”

After she moved back to Louisville, she started teaching anywhere she could, as she built up her teaching skills and local reputation.

Despite her work ethic and success, Rasool describes an early dose of imposter’s syndrome.

“As far as like going to school, and having a theater or musical theater or actual degree in dance, I don’t have that,” she said. “And I used to let that bother me. But I stopped. Because, I mean, some of the best of the best don’t have degrees in acting, or dance, you know?”

Now, her studio has grown to 70 students, with a waiting list, and plans for a second site on the horizon. Then came the opportunity to work with Actors Theatre. It’s not an opportunity she sought out.

“They reached out to me, which was the really cool thing,” she said. “I was like ‘woah.’ They said they just researched companies here in Louisville, and they said my company stuck out the most to them.”

Actors Theatre pulls talent from all over the country, so to get a call from them is a pretty big deal for a local artist, and it’s also an impressive line on the resume, with some big-time bragging rights attached.

While I couldn’t stick my head in to watch Rasool teach class, her studio has video monitors set up, so that parents, and at least one journalist, can watch class from the small waiting area.

Rasool works and moves confidently, with the exact same authority she exhibited in the rehearsal downtown. Professionalism is professionalism, and while grownup performers are a world away from school kids, it’s the same leadership that can push both to the limits of their ability.

“I’m a really tough, hard-head, that gives a lot of love,” said Rasool. “There’s a difference between being tough and mean, I always tell my kids. I’m going to push you really hard, though.”

Rasool keeps pushing herself hard too, and will be working with StageOne soon, doing choreography for “American Tales: John Henry, Pecos Bill and Brer Rabbit,” a world premiere commissioned from Idris Goodwin, opening in March.