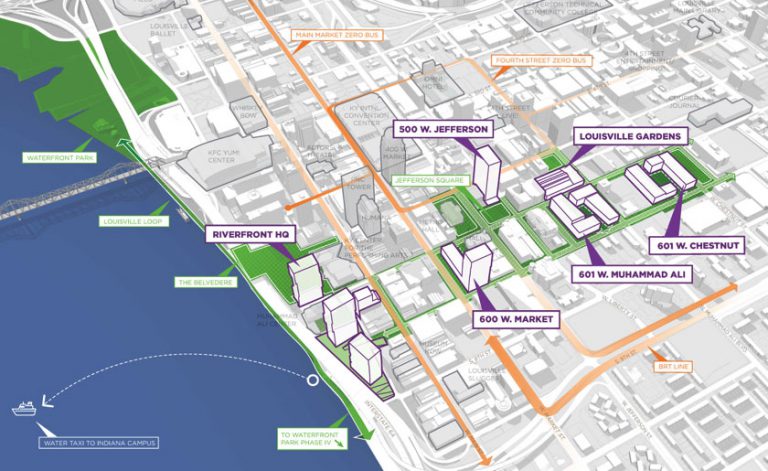 From Greater Louisville's proposal to Amazon

So you say you want more info on the Amazon headquarters proposal that the Louisville area submitted?

Can’t find other news reports on it?

Well, we believe you have a right to know what your government is offering Amazon (on your behalf). To be honest, you paid for the proposal, so actually it’s yours, and you will have to deal with the consequences if Amazon does decide to build here.

Last week, LEO provided an exclusive, top-line look at the most important details of the pitch from a collaboration of Louisville, Kentucky and Indiana government officials and business leaders: A $2.5 billion incentive package; details of the five locations proposed, including one that uses existing buildings and buildable lots downtown and in Clarksville, Indiana; Kentucky’s offer for Amazon’s exclusive use of a state park; and a walk through a typical day in the life of a fictional HQ2 Amazonia software engineer, Samantha. (Spoiler alert: She “likes to meet up with friends in NuLu to poke around the local shops and enjoy the diverse culinary scene.”)

Also, we let a Louisville ad pro grade how the bid was presented. His take: It is “somewhere between Tragic and Cringe-Worthy.”

Here are more bullet points from the bid:

Louisville’s proposal claims that “Greater Louisville is a national and international hub with easy and fast connections.” It boasts about providing citizens with commuting choices including: mass, public transit, bike lanes and “short, low-stress daily commutes that average about 20 minutes.”

It says: “Move Louisville, the city’s 25-year strategic transportation plan demonstrates [sic] city’s commitment to multi-modal transportation and connectivity for residents and businesses.” It also says Move Louisville recommends a $1.4 billion investment in infrastructure, both maintenance and improved safety and mobility. Current plans indicate it will spend $100 million over the next five years.

No further discussion of Move Louisville is provided, or even a link to the city’s website, which, by the way, says Move is a 20-year plan, not 25 years.

According to the Amazon request for proposal: “Travel time to an international airport with daily direct flights to Seattle, New York, San Francisco/Bay Area, and Washington, D.C. is also an important consideration.”

OK, we know this is not our strongest area. However, the Louisville proposal points out that our airport (SDF) offers eight daily nonstop flights to New York City, and nine to the Washington, D.C. area. Beyond that, SDF offers over 50 connecting flights a day by four airlines to San Francisco and Seattle.

The proposal hammers the claim that SDF can grow: The airport has 24 passenger gates and can provide more service without new construction. Last year, 3.3 million passengers came through SDF, and the terminal has a capacity of over 4 million.

It notes that in 2017, the Louisville Regional Airlift Development was formed “to facilitate new nonstop flights from SDF to key domestic and international markets.”

To bolster the growth-is-possible theme, the bid includes two letters of support — one more supportive than the other. A letter from Delta Air Lines says: “Delta will partner with Louisville Regional Airlift Development and Amazon to develop non-stop service between Louisville International Airport (SDF) and Seattle/Tacoma International Airport (SEA)…” United Airlines was less definite, saying only it would “monitor market conditions closely, and react promptly, to meet the needs of customers and communities.”

This would have been a good opportunity to talk up UPS Worldport — you know, which might be useful for a company that ships a lot of boxes… maybe. But, alas, no mention.

Getting there from here

Amazon requests “the ranking of traffic congestion for your community and/or region during peak commuting times.” And it wants direct access to rail, train, subway/metro and bus routes.

Sure, it will be hard to convince Amazon that Louisville has the urban transportation system of the future. But the writers should have been clearer.

The proposal provides an infographic with commuting possibilities from around the city to the area of the proposed downtown/Clarksville, Indiana urban campus for HQ2. For instance: From the UofL Belknap campus, it would take seven minutes by car to get to the urban campus, and 16 minutes by bike. For buses, however, the metric of measurement changes. It says a bus leaves “Every 12 Min.” It shows only bus pickup times, not commute times, with no further explanation.

The bid does spend space highlighting its progress in updating Louisville’s bus service — now the second largest fleet of all-electric buses in the country. Additionally, it notes that the city has moved more of its fleet to hybrid-electric and clean-diesel buses. This environmentally-conscious evolution of TARC buses, rightfully, should be a point pride.

Next up: a light-rail line?

Additionally, the proposal extols LouVelo, our bike share program, which offers over 300 bikes at 27 stations across the city — what would be the “urban campus” for Amazon. “Plans to expand the system are in process,” according to the bid.

No discussion of how riding a bicycle in the city, even with the lanes, remains highly dangerous.

Possibly its most innovative idea is a water taxi service. In a section sounding like the title of a Dr. Seuss book, called, “Over The River We Will Go,” little is offered in terms of details, such as cost or who’s paying for it, fleet or passenger capacity and estimated commute time. Simply, “Louisville proposes a new Water Taxi service to support Amazon’s downtown Riverfront HQ…”

Does everyone get to use it, or is it just Amazon’s ferry service?

This would seem to be the ideal time to boast that Louisville is a Google Fiber City. After all, there are so few such cities in the nation. The proposal does include the requisite cell phone and fiber coverage maps. But the only mention of Google Fiber is one sentence under the “Quality of Life” section of the proposal.

Amazon wants the winning city to have highly-educated, talented workforce, the ability to attract and retain talent “ … and a strong university system is required.”

Louisville’s proposal provides a significant overview of local programs, partnerships, universities, degrees and so on — it checks the boxes. In terms of the future workforce development and attraction, there are several points of interest.

The state offers to build a new, on-site Amazon Corporate Learning Center, to be operated by Kentucky Community Technical College System “with programming management through Amazon’s guidance.” No size, cost or capacity is provided.

The state’s Cabinet for Economic Development offers a dedicated workforce project manager specifically to tend to Amazon’s future employee recruitment and training throughout the development of HQ2.

To accommodate Amazon’s 50,000-plus employee hiring plan, the Kentucky Skills Network and its local partners would create “a custom website specific to the Amazon HQ2 project … to serve as a portal for job posting, application submissions, pre-screenings, etc.”

It says Fort Knox and Fort Campbell could be a source of talent, retired veterans looking for work. It suggests a collaboration with the bases “to develop a career skills program, an 8-week training internship for future employees.”

Starting this year, 11 Jefferson County high schools have launched Academies of Louisville, “small learning communities within JCPS high schools that allow all students to connect what they’re learning in the classroom to the real world through career pathways.” The city proposes that Amazon partner with these academies, and take an “active sponsorship role in the educational experience and learning opportunities for educators and students.”

LiveInLou is a $5 million initiative, “to increase Louisville’s regional population growth rate and add at least 34,000 working age adults to our region by 2020.” This includes a toolkit for corporate recruiters to target and market skilled individuals who are likely to move to Louisville — primarily educated, 26-to-37-year-old couples with no children whose average annual income is $75,000-$100,000.

The bid also details The Kentucky Talent Acquisition Initiative, to be considered by the 2018 Kentucky General Assembly. This incentives-based program “will provide incentives to workers in high-wage, high-demand industries who relocate to or stay in Kentucky.” It would do so through multi-year income tax credits for personal expenses, such as home purchases, student loan forgiveness and relocation costs.

About that tree ordinance

Even as Louisville fails to pass a toothless tree ordinance that has no chance of restoring the disappearing tree canopy, it wants to offer Amazon the biofilter project. “The biofilter will be designed to be a place for employees to enjoy green space, relax and experience the health benefits of vegetative medicine.”

The city has offered to partner with Amazon, “on the forestation plans for HQ2 to ensure that it will contribute to increasing the citywide tree canopy … [and] to identify the environmental co-benefits of Amazon’s forestation efforts.”

Seriously, the rest of us wouldn’t mind experiencing the health benefits. •

Ed. Note: We asked the city officials and key partners to comment on our publication of the bid and our editorial in favor of doing so. Here is their response:

The practice of economic development nationwide is to not comment on active projects, as the companies require confidentiality while negotiating potential new investment and jobs with multiple cities and states. The KY General Assembly recognized this in … 05-Open Records Decision-001 (“until negotiations are completed, as may be evidenced by a signed contract or the reject of the offered contract by the chosen bidder, the records are preliminary … ”). Premature disclosure of this information could jeopardize negotiations, place Louisville at a competitive disadvantage, or even eliminate Louisville from consideration. Once a company selects a location, and when public funds are involved, the details of the project become public, and the public can comment on the project details through public processes. — Mary Ellen Wiederwohl, chief, Louisville Forward, and Kent Oyler, president and CEO, Greater Louisville Inc.