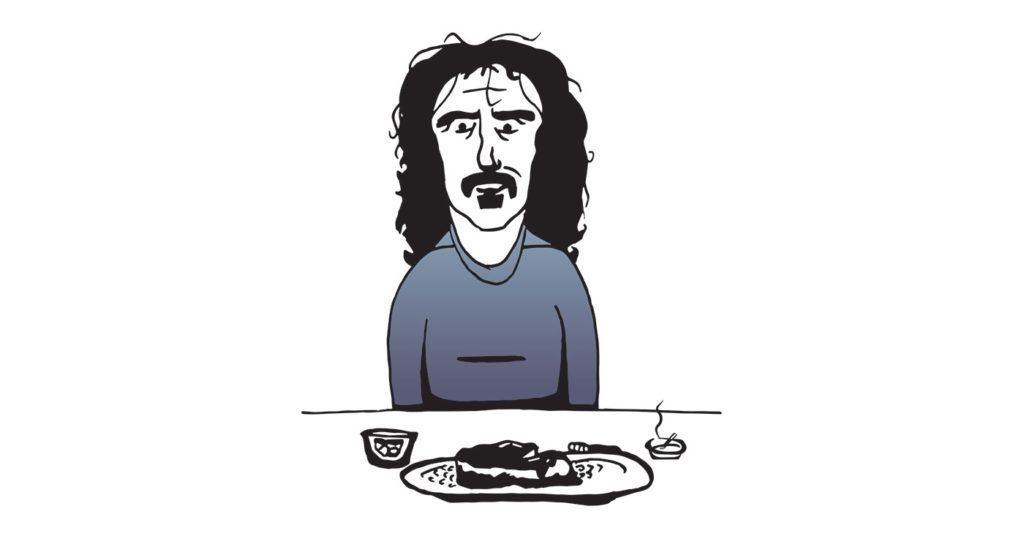 We asked a select group of people in the foodie know two questions and set virtually no boundaries for their answers or how they could answer. I will let Decca Executive Chef and Owner Annie Pettry, start us off:

LEO: If you could make dinner for one person, alive or dead… famous, infamous or not… who would that be and why? Gov. Matt Bevin? Your mom? Ali? Alien invader?
My mom, hands down! She raised me to follow my dreams and do what I love. However, she didn’t get to see me actualize those dreams.

What would you make and why?
Eggs Benedict. My mom loved eggs Benedict, especially the hollandaise. On special occasions we would go out to brunch, and if it was on the menu, she would order it. I never got to make it for her as a professional chef, but I know she would be thrilled.

I can’t imagine a more interesting dinner companion than Reb Yeshua Bar Yehosef from Nazareth, the charismatic rabbi whom history knows as Jesus Christ. I wonder what he’d have to say about all that’s been done in his name from Constantine, Augustine and Aquinas on down to Falwell, Robertson, Franklin Graham, Liberty Counsel and the Family Foundation.

Where would I find him? He wouldn’t be at the Louisville Country Club or the Pendennis Club, that’s for sure. More likely, I’d come across him on the riverfront, cooking fish over a charcoal fire as he broke bread for the folks at a homeless encampment. Or maybe hanging out with a bunch of refugees from Honduras in a South End trailer park. That’s how he rolled in Galilee, and I can’t imagine it would change now. I’d invite him home for dinner, and he’d insist on bringing these friends along. OK with me.

What’s for dinner? I’d offer a kosher meal, certainly: He never said anything about abandoning Judaism, and I’d want to hear his thoughts about how his followers later changed that in heartbreaking ways that took us to the Holocaust.

So I’d fire up the grill, butterfly a leg of lamb and sear it fast over high heat, and maybe a few mackerel fillets, too. Plenty of flatbread and fresh tortillas, and bitter greens, kale, collards and mustard greens. Maybe some sweet medjool dates for dessert. No dairy with a meat meal, of course, but we’d have plenty of good red wine.

And we’d talk politics. Oh, boy, would we talk politics. This prophet who preached good news, care and service to the poor, widows and orphans, refugees and resident aliens, told us to love all our neighbors, and warned that the rich would have a hard time in his kingdom? I’m afraid he’d be well and truly pissed about how far we’ve come from all that. But wouldn’t it be great to hear him talk about it?

Besides my mama… I think JFK… I love everything he stood for, and I would’ve been honored to have had the chance to cook for him and Jackie, and spend time with them and the kids…

I’d start with a fresh fish ceviche, of course… then I’d make some empanadas, and then grill some prime rib eyes with blue cheese rosemary butter, asparagus with chipotle hollandaise, and roasted new red potatoes.

Coming up with who I wanted to invite to dinner was easy for me — it’s David Bowie, of course.

I have admired many artists and musicians in my 44 years, but none who have had a stronger impact on me emotionally and creatively as has David Bowie. His songs gave me strength and confidence through some very difficult times and major changes in my life.

His favorite meal was shepherd’s pie. It was the ultimate comfort food for him.

He often spoke about it, saying that while he felt very alienated from a lot of normal life, he could dive into a shepherd’s pie, and for just a few moments, feel not so different.

I know that I have that same feeling quite often, as many of us do.

Bowie’s music gives me comfort in those times, so I would like to give him some, with my own version of his favorite British dish.

Although I am no Iman (who famously used to make this in her sky-high heels before heading out for the evening), I do have a few tricks up my sleeve from my old pub-working days while living in London, many years ago.

My version has fresh cinnamon in my lamb mince, and also I mash half leeks and half potatoes for the whipped topping.

I would also put a hearty dose of our local Bourbon Barrel Foods Worcestershire in my gravy, for a bit more tang.

I would take it straight out of the oven, put it in the middle of my kitchen table with two big spoons, and settle in for just a few moments of normal with David Bowie.

Without hesitation my answer is Frank Zappa, the eclectic, eccentric composer and musician (and guitar god) who died in 1993. My main motivation would be for the conversation that might be had over a meal. I’d have about 1,000 questions for him, but I’d try to edit it to about a dozen so as not to try his patience. We might not have time for any more questions if I were to begin with “Frank, what do you think about Donald Trump being president?” So I might put that one further down on the list. I’d ask him how he feels about current pop culture, especially entertainment and specifically music.

As for what I’d prepare if I had a chance to feed Frank, well… Zappa famously subsisted on coffee and cigarettes, mostly. He was known to have referred to tobacco as a vegetable (which it technically is, but please don’t eat uncured tobacco; it’s poisonous, as a well-known local chef found out a few years ago when he held a special tobacco-themed dinner, accidentally sickening the diners who attended).

Frank wrote a song or two about “confinement loaf” aka Nutraloaf, a vile, bland, ground-up concoction resembling meatloaf. Confinement loaf is fed to misbehaving prisoners in some institutions as punishment, with the added attraction that no utensils are needed to eat it.

So I’d like to think I’d make Frank the best damned meatloaf on the planet, with lunch lady sauce (a tomato gravy), silky mashed potatoes and grilled asparagus.

I doubt he’d eat much of it, but I’d surely enjoy it while we talked and although I wouldn’t garnish anything with tobacco, I’d happily let him smoke while we dined, since he hasn’t had a cigarette for 24 years.

I don’t remember much about my grandfather. I remember he was kind. He seemed to be the tallest man I’d ever met. Because he passed away when I was very young, I really only know him posthumously. I know him mostly through family stories, film and his writing. He was a UofL creative writing professor.

He was very into Southern cooking, and he was the main cook of the household when my mom and aunts and uncles were growing up, and also during the holidays.

There’s a particular passage in his novel “Passing Through” that I’ve always been drawn to. The family is sitting around the dinner table, bitching to and about each other, eating fried chicken and beets.

So, if I could invite one person to dinner, it would be my grandfather, Leon V. Driskell. I’d make fried chicken and beets, and we could gorge ourselves on food and complaints.

Knowing only what I know, I think he’d rather enjoy that. •