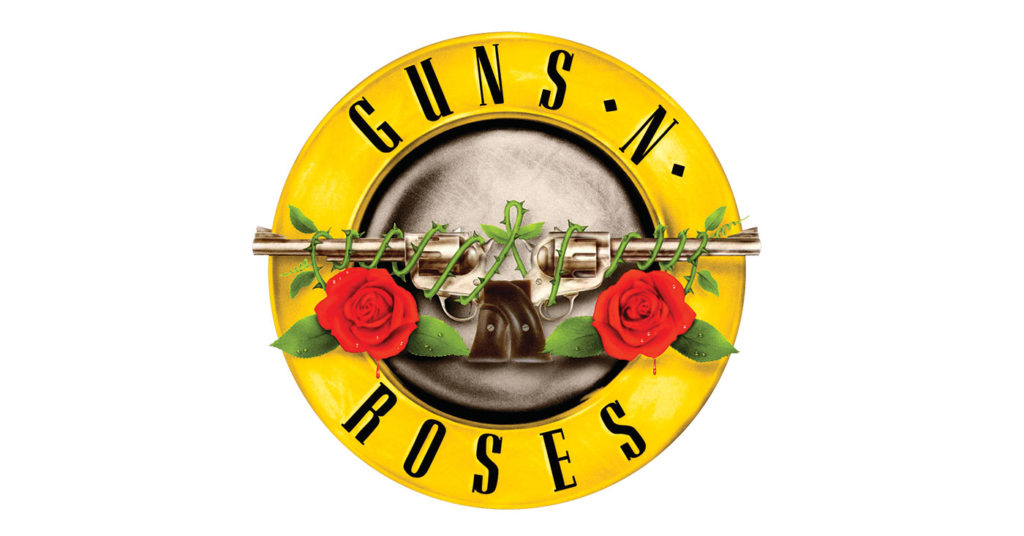 Before Guns N’ Roses brings its reunion tour to the KFC Yum Center, we looked through all of their studio material, finding reflections of their career arc. Here’s a brief history of the band’s highs and lows as mirrored by five songs, including one that launched them into the limelight, one that rightfully pissed people off and one that punctuated their downfall.

‘Welcome To The Jungle’
from Appetite For Destruction (1987)
The opening song from their debut record is probably still Guns N’ Roses’ most popular song, and it definitely reflects everything that kick-started the band’s 100-mph race into the pop culture lexicon. An opening riff that burned into your brain, over-the-top and unapologetic vocal swagger with a likable lack of give-a-fucks, a glimpse into a seedy and dangerous world filled with hard drugs and sleazy sex and unlimited corruption, backdropped by a city that would eat you if you didn’t play your cards right. In “Welcome To The Jungle” they seemed like the careless anti-heroes stranded in the underbelly, making their slice of the late-‘80s City of Angels sound like some sort of dystopian future, but not in any sort of complex, egg-headed way. Long substance-fueled nights in a city that they portrayed like the movie “Escape From L.A.” chronicled a wild and dicey reality that they lived in, proudly on the wrong side of town. They weren’t trying to leave. They made it sound fun, because they were insane. And bound for rock-’n’-roll stardom.—Scott Recker

‘One in a Million’
from G N’ R Lies (1988)
Appetite for Destruction catapulted Guns N’ Roses to fame, but it was the follow up EP, G N’ R Lies, that drew an angry, critical eye to the messages in their lyrics. One song in particular, “One in a Million,” created a maelstrom of controversy. Its lyrics calling to “police and niggers…” and “immigrants and faggots,” drew immediate and seemingly expected criticism from fans, activists and music critics. The song, which also pointed a finger at “radicals and racists” presented the band’s singer, Axl Rose, with a conundrum that he struggled to explain. Was he a racist, a homophobe, a sexist or a nativist? Yes, for sure. But also, he was someone struggling to understand the world of Los Angeles with the mind of a small-town Indiana boy. In 1988, Rose was the personification of what happens when the small-town ideology of a white, heterosexual male meets the world. Rose told RIP magazine that the song was a way to “express how vulnerable I felt in certain situations that had gone down in my life.” The song was one of the first G N’ R songs written solely by Axl Rose, and so the fallout rested mainly upon his shoulders. Slash, G N’ R’s biracial guitarist whose mother is black, wasn’t pleased with the song, but didn’t want to condemn his bandmate. Rose has ceased trying to explain the song or its lyrics. Probably for the best.—Erica Rucker

‘November Rain’
from Use Your Illusion (1991)
It speaks to the power of Gun N’ Roses that an up-and-coming punk kid like myself would gravitate towards the pompous glory of “November Rain,” but I’d be lying if I said it didn’t have an impact on my life. A power ballad from Use Your Illusion, the song is emblematic not only of the scale and scope of a band at the top of their game, but also at the height of their reach. Gone were the rowdy bunch of scrawny hair metal kids, taking you to “Paradise City” or giving a “Welcome To The Jungle,” replaced instead by a band majestic in their opulent glory. The accompanying video features perhaps the most important cake destruction in the history of the video, music or otherwise. You can hear hints of latter day Led Zeppelin, a full symphony and delicate piano bit introducing Rose’s smoky vocals. The centerpiece to the album, “November Rain” was a seminal hit in an already robust career, featuring a ripping lead by Slash, performed in the video shirtless and atop a piano overlooking the ocean, as you would normally do. And it’s almost nine minute run time is impressive for a pop song.—Syd Bishop

‘Since I Don’t Have You’
from The Spaghetti Incident? (1993)
Hair metal always runs the risk of a self-imposed stereotype of male-centric bravado laid over a homogenized soundscape, drenched in reverb and whining guitar solos. Which is why it is surprising that one of the worst hair metal offenders, Guns N’ Roses, pulled their influences from such a diverse pool of artists as seen through their covers album, The Spaghetti Incident?, in which they recreated songs from famed junkie Johnny Thunders, glam-rock god Marc Bolan of T. Rex, the horror-punk band The Misfits and former cult leader Charles Manson. But the most curious cover on the album is the 1959 Billboard hit “Since I Don’t Have You” by doo-wop group The Skyliners. The cover fully embodies the original, complete with reverb-coated piano and drums as well as high-pitched guitar solos by Slash emulating the string arrangements. This recording not only shows the musical variety in the Guns N’ Roses arsenal, but also shows the band’s sonic complexity and creative spirit by devolving the song into an experimental electronic coda. —John King

‘Better’
from Chinese Democracy (2008)
More than a decade after Axl Rose’s dictatorship caused Guns N’ Roses to crumble around him, the “band” released their first new, original music since the Use Your Illusion double record — it was also the first original music from the band without any other of the non-Axl core members who helped make Appetite For Destruction so raw and unique. No Izzy. No Slash. No Duff. And it was an expected train wreck of a record. It was two decades of unchecked ego and anger at its sonic tipping point. It’s a record that shouldn’t have been made. I fully get assembling a new band and trotting around the world, playing the old songs and getting richer. But going into the studio, and making a half-baked record with songs like “Better” — low-grade, mid-2000s radio rock with recycled ideas and a cheesy chorus, sounding more like Buckcherry than a band that once was considered rock overlords — doesn’t make much sense to me. When Chinese Democracy came out, I thought that there was no way that anything resembling their peak lineup would reassemble — not with Axl out there bulldozing the band’s legacy. But I was wrong, and here we are.—Scott Recker