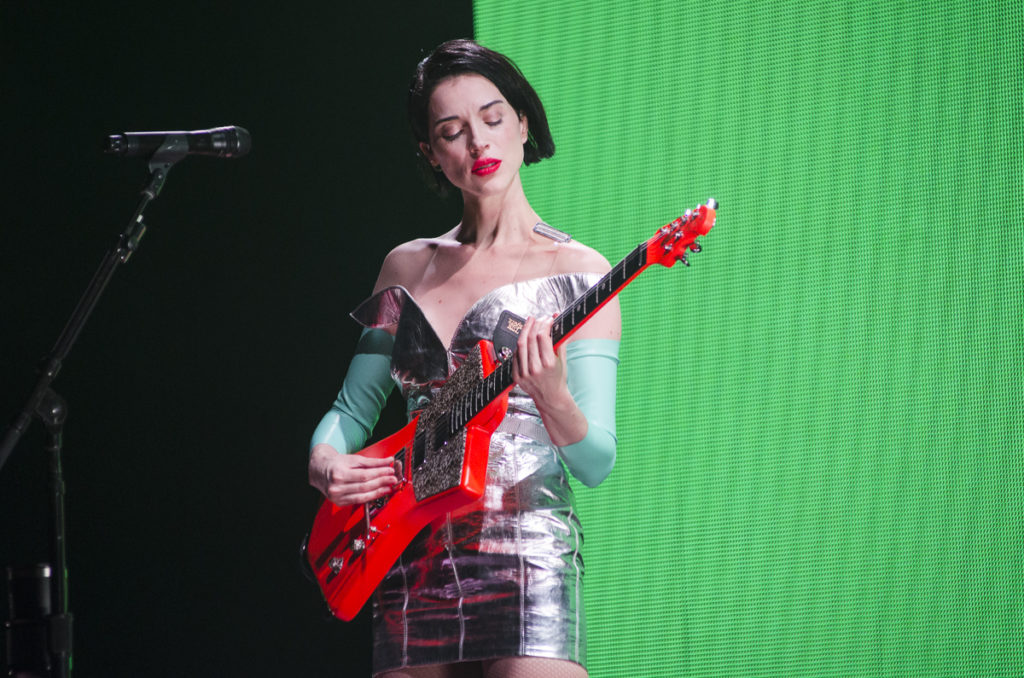 The illustrious performer known as St. Vincent (real name: Annie Clark), was deep into the second set of her show at The Kentucky Center’s Whitney Hall last night. Nobody was looking at their phones. Clark, standing center stage and holding her signature axe, a neon yellow Ernie Ball Music Man — the only kind of guitar she’s seen playing these days — repeated herself:

Of course, Annie, we wanted more danger. She didn’t have to ask again.

The 150-minute concert was split into two parts. The first half was a warming spread of songs from her first four albums — “Marry Me” opened the set, as Clark wore an unabashed amount of hot pink. The second half was a presentation of her newest album, MASSEDUCTION, from front to back. Those who arrived early were treated to a screening of her surreal short film “The Birthday Party,” setting the tone of the evening.

Did anyone else ask themselves where this mass of sound was coming from?

Clark performed solo. No visible band or backup, except for the Music Man and an indigo curtain backdrop. But the sound coming out was huge — this show was meant for heights. Not on real platforms like from her 2015 concert at the Brown Theater, where she stood high, holding a different guitar. I mean, emotional heights, and we had no choice but to engage with her visions.

Maybe she prefers to be alone. Clark is, after all, a natural spectacle and an endowed musician who plays guitar like a synthesizer. She’s also a visual artist. She proves her impact every time she’s on stage. Between the hits (“Digital Witness”), bangers (“Rattlesnake”) and new favorites (“Pills”), there were some tearjerking moments. It’s easy to empathize with a solo performer on stage, especially when they shed their instrument and curl into a fetal position on the floor, as she did for a slow singing of “Strange Mercy.” Then, for “Happy Birthday, Johnny,” Clark again spoke to the elusive character who she asked to marry on her first album. Perhaps the same person she tells “You and me are not meant for this world” in “Hang on Me,” which opened the second set.

St. Vincent left us with a parallel at the end of “Smoking Section,” the final song on MASSEDUCTION. Flashing on the projectors it said “THE END” as Clark repeated herself, “It’s not the end, it’s not the end,” before she walked off the stage. The bassline of “Regiment” from Brian Eno and David Byrne’s 1981 album My Life in the Bush of Ghosts kicked in.