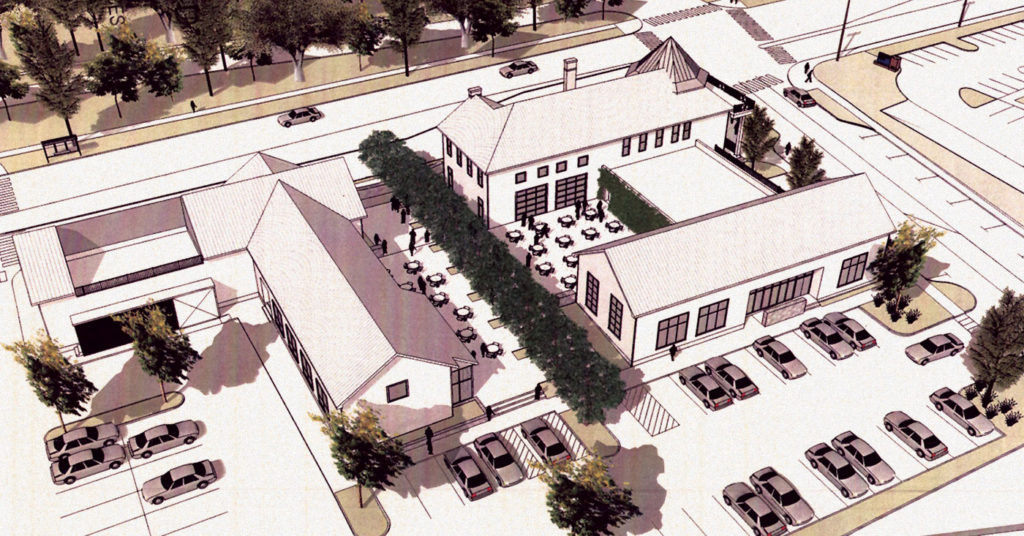 Once considered the Heart of South Louisville, Colonial Gardens has a long history that reflects the ebb and flow of South Louisville over the years — once it was a zoo and a place where Elvis performed, but then a vacant eyesore.

Now, some say, the impending renovation of the building heralds a renaissance for the area.

In early 2018, Underhill Associates will begin a $5 million restoration to the Colonial Gardens building, incorporating 7,000 square feet of the original structure into a larger development that will include a shared, outdoor seating area and a venue for live entertainment. At this time, no announcements have been made regarding the tenants for the space. The project is set to wrap up in the spring of 2019.

With the $8.9 million renovation to the Iroquois Amphitheater in 2000 and the recent $1 million overhaul to the Iroquois Park Northern Overlook, the Underhill Associates’ project is right on time for Iroquois Park and Colonial Gardens to once again bring folks together in South Louisville for great dining and entertainment.

Local residents pushed to designate Colonial Gardens as a local landmark in 2008. The city bought it in 2013 in a bid to boost commercial redevelopment.

The Gardens has come a long way.

It all started when Fred Senning, a German immigrant, found his way to Louisville in 1868. By 1877, he married Minnie Goeper. They were true entrepreneurs. They owned a hotel on East Eighth Street and introduced Louisville to its first bowling alley. At the turn of the century, the street car began offering services to South Louisville, and the couple began looking south of the city as well. Iroquois Park was in its infancy, and the neighboring hills were dotted with summer homes, where Louisville’s elite escaped the heat of the city for recreation.

They built Senning’s Park on the southeast corner of Kenwood Drive and New Cut Road; Iroquois Park was to the west, and the end-of-the-line turnaround for the Third Street Trolley was to the north. At the time, New Cut Road was a dirt road. Today, we know the Senning’s Park building as Colonial Gardens.

Senning’s Park was a big draw. At the height of its popularity, the Louisville Street Railway Co. had to add extra cars to service all of the travelers headed for Iroquois Park and Senning’s Park. For Decoration Day alone (now Memorial Day), Senning’s Park prepared for crowds in excess of 8,000 to 10,000 visitors.

When Prohibition hit, their son, William Senning, took over the park. He collected exotic animals and eventually turned Senning’s Park into Louisville’s first zoo. This was not just some petting zoo: It had lions and tigers and bears. There was nowhere else in town that you could take your child for an ostrich ride or to feed “Jimmy the Bear” ice-cream.

During the Depression, Fred and Minnie Senning stepped back in to run the park and did so until Fred’s death in 1939. The property was sold to B.A. Watson for $15,000. He gave the building the colonial style architecture we see today, and its name, Colonial Gardens.

Colonial Gardens was a hot spot during the big band era. During the 1950s, Colonial Gardens is said to have hosted impromptu acts by Elvis Presley and Jerry Lee Lewis. It closed its doors in June 2003 and sat vacant and neglected. It became a neighborhood eyesore. To the delight of some and the dismay of others, in 2008, the Colonial Gardens building was designated an individual Louisville Landmark. As Colonial Gardens has morphed from one venue to the next over the years, what has remained consistent is that it has operated side by side with Iroquois Park, one complementing the other.

The neighborhoods surrounding Iroquois Park started to develop primarily after World War II ended. But as that generation has aged, more real estate has become available and newcomers priced out of other areas of the city have started to move there. This and the improvements to Iroquois Park and high-profile attractions at the Iroquois Amphitheater, such as concerts and Jack-O-Lantern Spectacular, have created a need for more amenities in the neighborhood. The restoration of Colonial Gardens is primed to meet that need. •

Stefanie Buzan grew up in South Louisville and has lived in the Kenwood Hill neighborhood for the past 21 years.