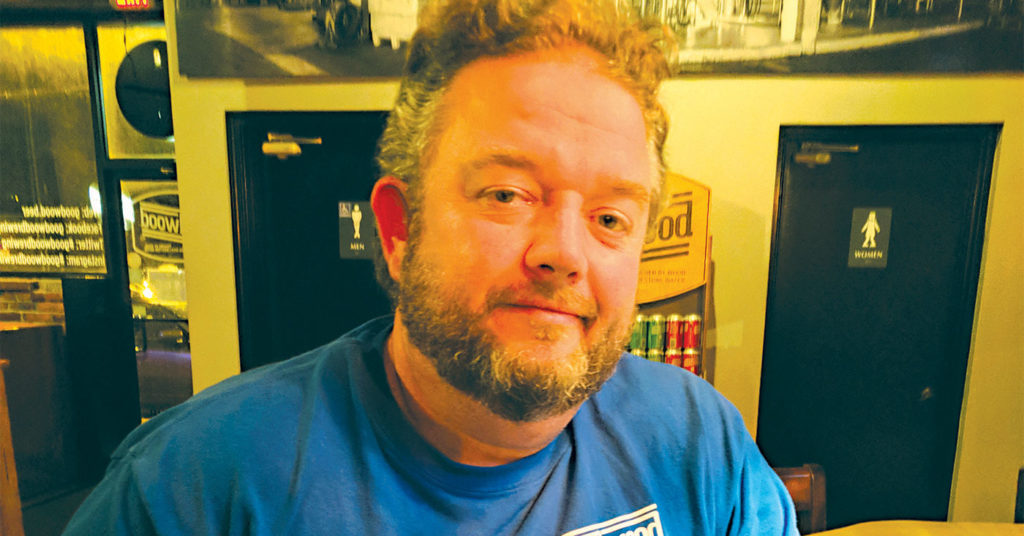 When Scott Lykins got involved in Louisville’s craft beer scene, it was as a consumer. He was a regular at the former Bluegrass Brewing Co. production brewery’s taproom — now Goodwood Brewing — at the corner of Clay and Main streets. That was around 2007.

As time went by and his involvement with local breweries intensified, he became one of those guys in the local beer scene whom everyone seemed to know. So, he began doing some volunteer work for the owners around 2010, helping out at festivals and whatnot, and in 2012 he was offered a job running the tap room.

“I thought, ‘I’ll do it for a couple of months,’” Lykins said during a recent interview inside that same tap room. “That turned into four years.”

Today, Lykins is Goodwood’s sales representative for most of Kentucky and in West Virginia. Instead of standing behind a bar, he’s in his car, traveling highways, state roads and country lanes, doing his best to convince liquor store, restaurant and bar owners they need Goodwood brews in their tap lines.

He’s also keeping in touch with Kentucky’s beer scene, which he says is quite different outside of Louisville. Smaller towns around the state haven’t been exposed to craft beer as much, and there isn’t a pint night at the local bar every week for trying new releases. Therefore, Louisville palates are more experienced and sophisticated when it comes to craft beer.

Louisvillians “have been drinking these ‘whale’ beers for a long time,” Lykins said, referring to hard-to-find beers. “People out in Kentucky are happy to get a Walnut Brown [one of Goodwood’s core beers], because it’s so new to them.”

At the same time, there are a number of beer scenes that are taking off. Lexington has for several years now been growing, and Lykins spends a lot of time and energy on that market — competing with Country Boy, West Sixth, Ethereal and others on their own turf can be challenging.

But he also said the scenes in Paducah, Owensboro and even Bowling Green are “on fire.” Kentucky is taking notice of craft beer in a big way.

The palate sophistication across the Bluegrass is still growing. He noted that many people he encounters at events and tastings don’t really know what they’re drinking. For instance, he gave a man in some small Kentucky town a taste of Goodwood’s pale ale and, before trying it, the man asked if it tasted like poplar. All Goodwood beers are fermented on wood, but Lykins was at a loss.

“You have all kinds of crazy ideas and misconceptions,” he said, although this can be half the fun. Introducing someone to their new favorite beer is its own reward.

“If you tell them what it tastes like, they’ll go find the flavor,” he said.

One thing that distinguishes Louisville’s beer scene from others in Kentucky is brewery loyalty, he said. Lykins suspects it’s because Louisville was exposed to local beer as far back as the early 1990s with BBC and Silo Microbrewery. Pipkin Brewing then came along, along with Oldenberg and Cumberland Brews. There’s been at least one brewery in Louisville for nearly 25 years, so the theory is that craft beer isn’t as new or novel to many Louisvillians.

He recalled walking into Country Boy Brewing’s taproom and seeing “a bunch of guys in Country Boy gear,” noting you don’t see that quite as much in Louisville, in part because so many breweries are popping up and the audiences keep shifting.

In a case like Country Boy, Lykins said, “it’s like going to see a band. Here, there’s no one that goes that balls-deep. Everyone wants what’s next, what’s special.”

In other words, a simple Nut Brown probably isn’t going to get as much notice in Louisville as it might in, say, Benton, Kentucky. Of course, Benton now has the tiny Dam Brewhaus, so it has its own beer. Lykins said it’s a darn fine brewery, too, despite working with just a three-barrel system in a small space.

But he’ll just keep spreading the Goodwood gospel. And when he has time — which isn’t often, these days — he’ll pop into the old tap room for a few beers and to catch up with co-workers.

He lifted his beer, looked around and said, “I’ve spent a decade at Main and Clay.” He’s not complaining at all.