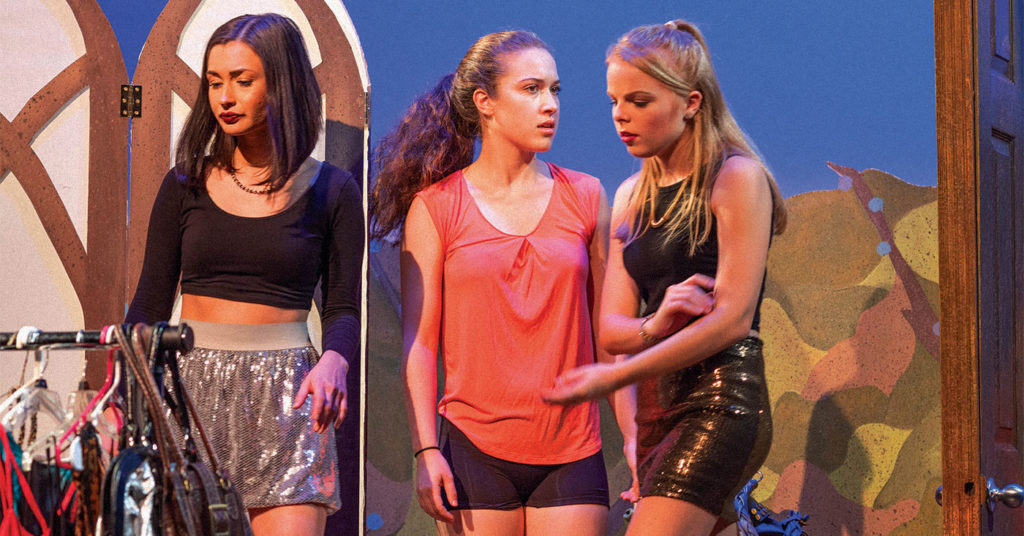 Every music lover understands the power of an individual performance to reshape our understanding of a piece of music, whether it’s Jeff Buckley’s interpretation of Leonard Cohen’s “Hallelujah,” or two great violinists approaching the Brahms Violin Concerto in D Major.

The same is true in theater, of course — and Bunbury Theatre’s current production of “Tuesdays With Morrie” is a case in point.

Much about this play, written by Mitch Albom and Jeffrey Hatcher and based on Albom’s bestselling memoir of the same name, makes me queasy.

The story is simple. While enrolled at Brandeis University, Albom formed a close relationship with his faculty mentor, Morrie Schwartz. Upon graduation, Albom made the standard promise to “keep in touch.”

He didn’t keep that promise. As described in the play, over the next 16 years Albom blossoms into a successful, high-profile, jet-setting sportswriter who covers every important event.

One night Morrie shows up on “Ted Koppel’s Nightline.” He’s recently been diagnosed with the fatal disease ALS (aka Lou Gehrig’s Disease). Rather than succumbing quietly to the disease, Morrie has decided to keep teaching. His new curriculum is death and dying — and what that process reveals about the art of living.

Feeling guilty about neglecting his teacher for so many years, Albom first makes a pilgrimage to Morrie’s home. Then, he commences a series of 14 weekly visits during which he records their conversations, which eventually become grist for the book, a massive bestseller that has been adapted as a TV movie (with Jack Lemmon in the Morrie part) and this play.

The action of the two-person play transpires in an alternating series of vignettes. In one cycle, Albom recounts anecdotes that illustrate the shallow, career-focused emptiness of his life prior to his reunion with Morrie. The play describes the other cycle as a class with a single student. In that cycle, Albom asks existential questions, and Morrie probes Albom’s psyche and offers ageless advice couched in aphorisms like “Once you learn how to die, you learn how to live,” and “Love wins. Love always wins.”

The circumstances of the book’s creation and the greeting card simplicity of the ideas have always struck me as cynical and exploitative. And when I reviewed a PNC Broadway production of this play a decade or so ago, the performances in that touring production did nothing to dispel that view.

So now we come to this Bunbury production, directed by J.R. Stuart, who also plays the Morrie role. Albom is played by Zac Taylor (costumes by Hannah Greene, lighting by Gerald Kean and set design by Bob Bush).

In short, Stuart and Taylor deliver redemptive performances clear and honest enough to address — in this production, at least — all my qualms. Stuart had directed the affair with a focus on craft and conviction and an unabashed embrace of the play’s simple ideas. Opening and closing scenes find Stuart frozen in awkwardly joyful dance poses. As his motor control declines, we see him struggling to wield a fork over a plate of food — and weeping when he fails. In every scene his “thereness” seems completely natural. And he delivers Morrie’s pearls of wisdom not as weighty, profound discoveries, but as the self-evident maxims they are. It’s a luminous, uplifting performance delivered almost exclusively from the physical confines of wheelchair and bed. Likewise, in the relatively intimate Henry Clay Theatre, Taylor’s calibrated physical and vocal performance taps into the vulnerability that underlies Albom’s self-justifying bravado.

And in these times, when many of our shared assumptions about how people ought to behave toward one another are under duress, there may be some value to hearing what Morrie has to say.

Wise daughters who save their fathers (or themselves, or entire villages) by solving complicated riddles are staple figures in ancient folk tales and songs. Francis James Child’s study of “English and Scottish Popular Ballads” begins with riddle songs featuring the “Clever Lass” motif. Child finds the roots of that story in deep time all across Europe and Asia, with early versions in regions like Tibet and Siberia.

Given the pervasive reach of the theme, one might wonder why the best-known fairy tale girls are usually in need of rescue by, say, a prince or a band of small, bearded men. Or one might not wonder at all and simply draw the obvious conclusion that male-dominated cultures prefer narratives where men “save” women. (For evidence, see Hollywood. Or Congress.).

Meg Miroshnik’s 2014 play “The Fairytale Lives of Russian Girls,” opens with a reference to a Russian version of the “Clever Lass” tale that sets up the action. Then, it touches on what the play refers to as Russia’s “forbidden folklore” (much of which revolves around sex). Then, it spins out in a fantastical adventure featuring the wild exploits of a quartet of young women whose quest for freedom puts them at odds with assorted demons. They encounter bears, brutish men, an old witch who makes suspicious dishes in a mysterious oven, evil Czars and even older women who are aligned with the forces of evil.

Directed by Amy Attaway, this is a giddy mashup of pop culture riffs and archetypal themes. The quartet of heroines (Bailey Lomax, Chasidy Moore, Bridget Thesing and Megan Mraz) sometimes operate (and even pose) like Charlie’s Angels (plus one, of course). Carol Tyree Williams rolls out comic Russian dialect in twin roles. And Dara Tiller gives delicious performances in four roles.

There is a plot. It moves at a breathtaking pace and these clever lasses are, as Attaway describes them in a program note, kick-ass.