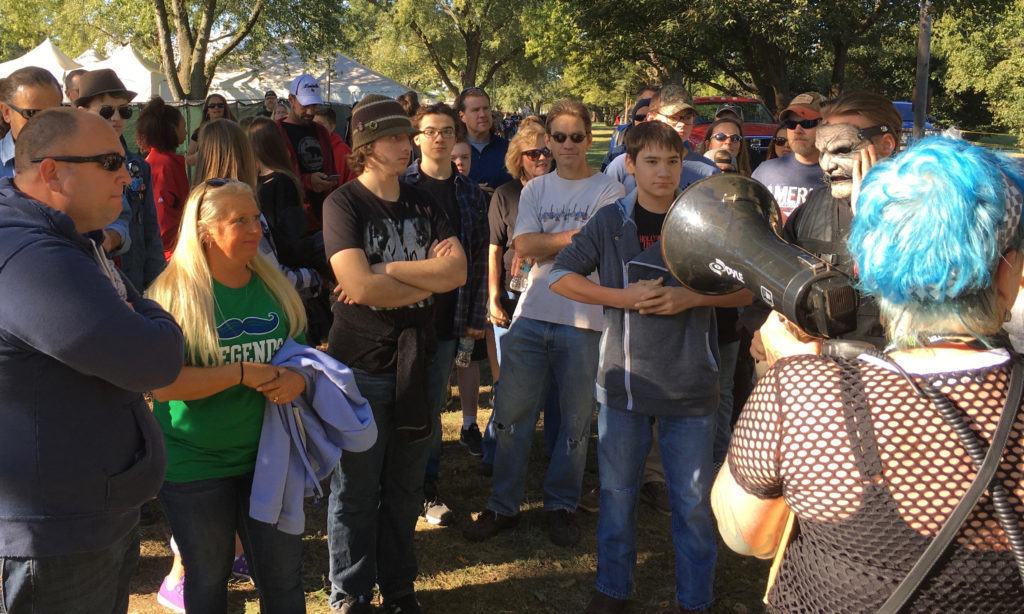 A crowd gathers under a tree at the entrance of the Louder than Life music festival. It’s a cool Saturday morning, and I’m standing amidst a sea of black clothing and a rainbow of hair colors. Tattoos, rock T-shirts, and even a juggalo or two, wait patiently for the doors to officially open. I’m sleepy, sporting a denim jacket and tan moccasins, an appropriately 1980s rock festival outfit. I’m not alone. Many festival goers came with their parents — people my age.

The ticket staff, security and police are onsite and at their stations. Streams of other members of the festival staff, from bartenders to food service, file in for the long day of slinging beverages and serving the giant crowds guaranteed to arrive. They are pulling wagons and carrying supplies for the day.

Before the music starts and as the staff set up their stations, Louder than Life opens its field at Champions Park to do a bit of gardening. They aren’t planting roses or azaleas. The organizers of Danny Wimmer Presents, alongside the staff of The Music Experience — an onsite, hands-on and interactive music store — want to sow the seeds of future music business hopefuls through the Student Experience, a day-camp that teaches kids about the music business. People including Squiggy DiGiacomo and Sarah Hernandez want to show them how it is possible to make a living in the rock-’n’-roll world without having to be on the stage. The partnership between DiGiacomo and VP of Marketing and Partnerships Clay Busch is how the Student Experience grew out of the original Music Experience concept.

“It started as a small pop-up musical instrument store and he had about six brands. That was really it. There was something special about it,” Busch said of DiGiacomo starting the Music Experience. “You could see the fans really gravitated to it.”

“The thing with the Student Experience is we have the ability to talk to the 10-year-old version of ourselves,” DiGiacomo says.

Minutes before the morning call time, Lynn Robnett, the Student Experience host, greets me. She’s wearing all black with blue hair and armfuls of tattoos. She holds a megaphone and calls out for kids attending the Student Music Experience. No one responds. She calls a few more times and looks around, slightly disappointed.

Just before 10 a.m., a group of kids from Mom’s Music walk towards us with their parents and teachers. She calls to them with the megaphone, and they gather around. Sarah Hernandez of The Music Experience joins us, also. She has the roster and the armbands for the students.

As the kids and their parents are banded, we are led through the guest check-in to have our bags inspected and bands inspected — the bands allow access for the morning Music Experience and the full day of the festival. There is some disagreement about the size and opacity of some parents’ bags (for security purposes), but it is quickly resolved and Robnett leads us to the Music Experience tent. DiGiacomo gives a brief introduction and schedule for the day, then releases the kids to the instruments.

Inside the tent, the kids — one of them, 17-year-old, Kentucky School for the Blind student, Michael Davis — get to play any of the instruments they wish. The walls of the tent are lined with guitars. At the rear of the pop-up store, there is a drum kit with specially designed quiet cymbals and drumheads. Michael is eager to get to the kit. He waits his turn, exploring the cymbals to the right of the kit stage.

Michael’s father, James Davis, said Michael’s love for instruments started when they brought home a small, toy keyboard: “We had brought home one of those Casio keyboards, and he was playing Pink Floyd and Rush songs in no time. We were like, ‘Holy Cow! We need to buy a bigger one.’”

“My parents bought him a used drum kit a few years ago. I used to play drums when I was a kid,” the senior Davis said. “About a week after he started playing, he was better than me.”

Michael has been to the Student Music Experience each of the years since Louder Than Life came to Louisville. He was the winner of last year’s drum contest.
“It actually came down to a tie between me and another guy,” he chimes in. “They put it to a crowd vote. It was really something.”

When Michael finally gets his chance behind the kit, he shows why he won last year. He is adept and skilled. His playing pleases the other students and their teachers.

But, the Student Experience goes beyond letting the kids play with instruments.

“Shout At The Devil was the album that changed my life. I remember watching the videos, but you didn’t really know anything about the band,” DiGiacomo said. “Unless Riki Rachtman had them on Headbanger’s Ball, that was the closest we got to behind the scenes. I was always intrigued by how that happened.”

The “that” DiGiacomo speaks of is the formation of the band to the music and the careers that resulted in the Ratts, the Motley Crues, and the Zakk Wyldes of the music business.

The ecosystem around the music industry and the music festival is what the Student Music Experience is all about.

Students are allowed to play the instruments, and get the opportunity to ask representatives from the instrument manufacturers about their work and brands. They are then led on a tour of the backstage area where they meet vendors, bartenders, media, and get to see all of the moving parts that create the festival experience on the other side.

Busch feels this opportunity is the responsibility of the Wimmer team and others like them.

“At the end of the day, if kids aren’t playing music, not picking up guitars, not learning to sing, draw, paint, play drums, whatever it may be, we have no music festivals and that’s not just a rock and roll problem, that’s a music problem,” he said. “Art is always going to be a part of human nature. We’re naturally creative. It’s interesting that governments nationally don’t really see the value.”

After the backstage tour, the group walks back towards the tent to officially end the Experience. Only a few of the group make it. The others have wandered off to the sounds of rock ’n’ roll about to begin.