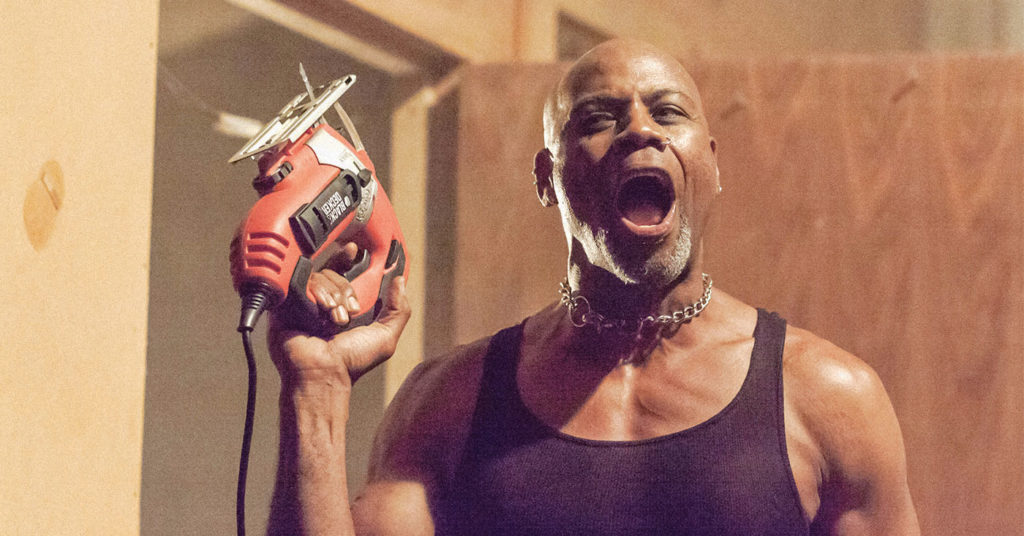 In the world of flat-screen entertainment, the zeitgeist is all about technological ways to give audiences an immersive experience. It’s all about 3D, high-def and even ultra high-def.

But even the best technology is a weak substitute for being a few feet away from the action. And this year’s renewal of Kentucky Shakespeare’s production of “Titus Andronicus” is about as fully immersive as you could wish.

Last year’s production was staged in a dark, boomy warehouse with plenty of dark shadows and ominous corners. This year, the company has relocated to the studio warehouse at Louisville Visual Art. The acoustics are clear. The audience is seated so close to the action that from every seat you can see the colors of the actors’ eyes. And some of the most chilling action flows around audience members.

Fans of revenge dramas will find familiar ground here — but when Shakespeare takes up revenge, what you get isn’t a simple, straightforward feud, or a simple strongman bent on getting even. Instead you get roiling tangle of conflicts that play out in murder, rape and mutilation. Of course, you also get fascinating characters and brilliant language. And in this production, directed by Matt Wallace, with costumes by Donna Lawrence-Downs, lights and sound by Jason Weber and fight choreography by Eric Frantz, you also get a presentation that is clear, fast-moving — and chilling.

In this contemporary staging, the contending forces are mobbed-up gangsters (think waste management firms in, say, New Jersey). Tattoos, black lipstick and deeply shaded eyes give Shakespeare’s Goths an up-to-date look. And the white, Ford van that you’ll walk around on the way to your seat plays important roles in the action.

Then, Titus (Jon Huffman) returns battered but triumphant from battle. His hostages are muted with duct tape. And when it’s necessary to dispose of bodies — well, waste management folks know their business.

In the wake of a power vacuum, the heroic Titus is instrumental in placing Saturninus (Jon Becraft) on the throne. But, within moments, Saturninus turns on his ally and takes up with Tamora (Jennifer Pennington), one of Titus’ captives.

From that moment on, Tamora, her sons and lover Aaron initiate a campaign of murder, rape and mutilation to avenge the losses they’ve suffered at the hands of Titus. And when it seems Titus can suffer no more, he contrives a diabolical plan of his own.

There are twists and turns and blood galore — but beyond the startling gore there is some magnificent acting during this play. Pennington’s Tamora is an inexorable force of nature, brilliant, cunning, sexually manipulative and unabashedly delighted as her violent plans play out. Jon Becraft is a full-on blazing lunatic as Saturninus — whose violent roars turn into kittenish whimpers any time Tamora bats her dark-lidded eyes.

Tamora’s lover, Aaron, is one of Shakespeare’s most fascinating villains. This is a character who can coo tenderly in the instant of carrying out a cold-blooded murder — and Dathan Hooper is brilliant in the role.

Meanwhile, in the house of Andronicus, devastation runs rampant. Molly Murk gives a stirring performance as Titus’s daughter Lavinia, who is the victim of a shocking crime that is central to the play. And Huffman’s Titus is even more formidable than in the 2016 production. His is a grave and resolute fury that can only have one outcome — watching it play out as he plots against Saturninus, Tamora and her two malignant sons (well played by Stephen Peterson and Daniel Price) is something to see.

Over at the Alley Theater, you can experience another immersive play that involves a murder — though this time in the context of a sparkly musical comedy, “The Mystery of Edwin Drood,” by Rupert Holmes, based on an uncompleted Charles Dickens novel of the same name.

Given Dickens’ penchant for tricky plot devices and surprise endings, “Drood” is perfect fodder for what has become standard — but still entertaining — trick in modern theater: giving the audience a determining voice in the outcome. And what better company to take up a play like that than the Alley, which has long reveled in devices such as pulling hapless audience members on stage to play leading characters.

In this production, audience members get warm, personal welcomes from cast members in Victorian garb as they walk into the theater. The idea is that you’ve arrived at a classic, English dance hall production — where good cheer prevails, even as things go wildly awry. The orchestra is nowhere to be found — but no matter: Clear the music stands off the stage, and the conductor (played by Joey Arena, who also directs this cheery production) will raise his baton and conduct a gramophone.

The action is narrated with bumbling joviality by a Chairman (John Trueblood), who introduces the characters, takes note of sinister happenings and points out possible clues as the action proceeds toward a dire, but mysterious, outcome.