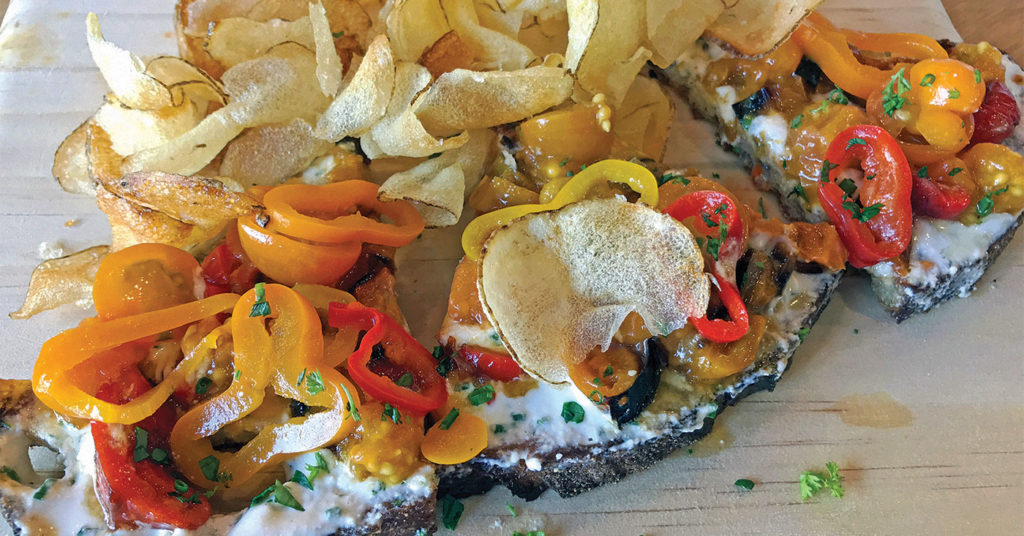 After many years standing vacant at the top of the hill in Clifton, prompting strollers on the avenue to muse, “Boy, that would make a great restaurant,” the historic, white-brick Hilltop Theater has taken its place on the city’s dining scene as Red Herring Cocktail Lounge & Kitchen.

I’ve been in to Red Herring a couple of times this week, for lunch and again for dinner, and I can see making it a regular hangout, whether I’m in the mood for a drink, a nosh or a little of both.

Beautifully renovated within, the cavernous, former theater space now glows in tones of pale blue, yellow and white, with a large bar as centerpiece, an airy balcony and open stairs affording plenty of additional space above. Tiny Edison-style bulbs hang at varied levels like a galaxy. A new patio alongside allows al fresco dining, and provides a paved, level sidewalk for easy access from parking at the rear.

Considering co-owner Brett Davis’ stature as a master sommelier, you might expect a more massive wine list than the two dozen vinous options, but they are as thoughtfully chosen and diverse. Ditto for the beer list — a concise compilation of mostly-fascinating draft and bottled beers from Louisville and around the world. It’s in the realm of mixology, though, that Red Herring’s bar program lifts off. By its own definition: “We are a cocktail lounge with a menu of 100 classic cocktails, original mixed drinks, adult frozen concoctions, wine and beer paired with pub food.”

I’d say the fare is far more than pub food, but I’ll get to that. We passed on the frozen concoctions and “Bombs” that use a hyper-caffeinated product called Phocus — a fancy version of Red Bull — mixed with tequila, vodka or rum. No thanks. The bulk of the list, though, includes just about every cocktail you can imagine, ranging from $6 to $12, happily weighted toward the lower end. We chose two classics, a tart-sweet, refreshing gin rickey ($5) and a well-made Sazerac ($7) that made me hear distant riffs of Preservation Hall.

The food is very good, and it is affordable. The lunch menu contains just 10 items, priced from $6 (for flatbread with topping of the day or pimento beer-cheese fries) to $11 (for a fancy grilled cheese with three local cheeses). The recently-revised dinner menu has moved from mostly small plates to shorter but still diverse mix of snacks, charcuterie, medium plates and sandwiches, with a dozen options ranging from $4 (for a baby wedge salad) to $15 (for Texas smoked brisket).

Speaking of that brisket, I can’t think of a better place to start talking about Red Herring’s food. To use a technical food-critic’s term, “omgomgomg!” Yes. It is that good. A dish put on as a short-term special for a Hurricane Harvey fundraiser, it proved so popular that it earned its way onto the regular menu.

Thick-sliced, fat-rippled Creekstone Farm brisket had been perfectly smoked, juicy and tender, with a dark rub and pink smoke ring, dressed with fresh arugula, pickled onions and a slab of dense herb cake. A sweet-hot, syrupy sauce was served on the side at our request.

A lunchtime patty melt ($11) was made with deeply-flavored, almost gamy Black Hawk Farms Kentucky beef, served open-face on Wiltshire buttermilk bread. It was served reddish rare without our having inquired, a decision that was all right with us but might be of concern to some. House-made American cheese added a tangy hint of mustard, with bread-and-butter pickles and crispy onions.

Ricotta toast ($8) takes things you don’t think would go together but puts them together to create startling new flavors that make you go, “Whoa, that’s good.” Toasted buttermilk bread was lightly painted with a coat of sweet, tangy whipped ricotta and topped with grill-blistered sweet peppers and tart, quick-pickled cherry tomatoes from Pink Elephant Farm.

Lunch for two was $25.50, plus the standard 20-percent tip that Red Herring adds to all bills as a service charge so the tip pool can be legally shared among staff. (Diners are welcome to reduce, eliminate, or add to the charge.) We added a couple of bucks to round up to $35. Dinner was $48, plus a $9.60 service charge to which we added another $4.