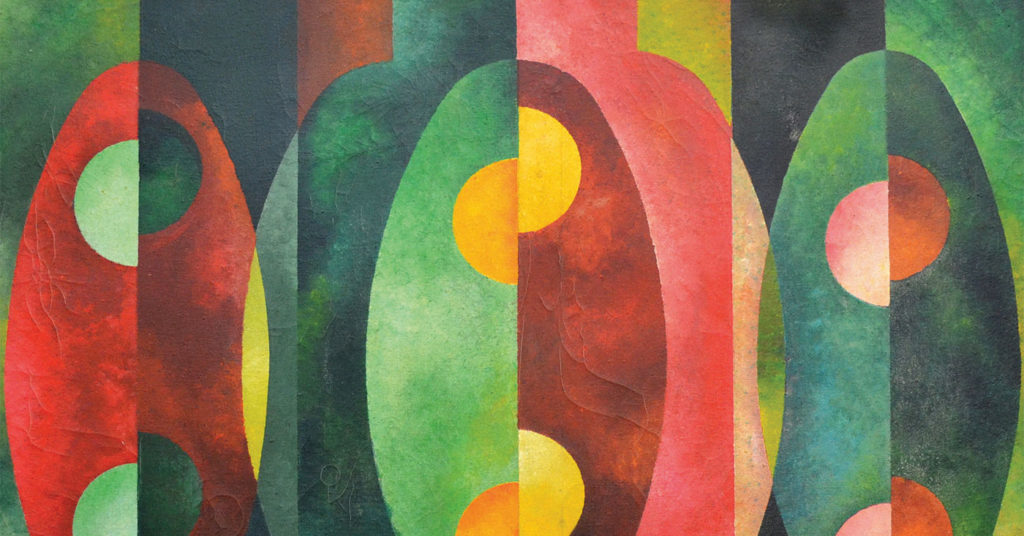 Abstract art can be a hard sell. Even today, many decades after its arrival in art history, most people still prefer representational art. So, it’s no surprise to learn The Filson Historical Society is just now hosting its first exhibition of abstract paintings.

“Understanding the Indescribable: Paintings by G. Caliman Coxe” not only promotes abstraction, but it also highlights one of Louisville’s premier black artists, Gloucester Caliman Coxe (best known as G.C., but he also signed his work G. Caliman).

Coxe (1907-99) was the first African-American to earn an art degree from UofL. He was 48. That’s one of the achievements that made him a local art leader.

Sculptor Ed Hamilton was a close friend. In his book “The Birth of an Artist: A Journey of Discovery,” Hamilton wrote about his membership in the Louisville Art Workshop, the African-American art group where he first met Coxe, a cofounder: “G.C., the dean of the black artists of Louisville and a master painter, was teacher, mentor and friend to all who knew him.”

This small exhibition of eight paintings include three loaned by Hamilton. “G.C. Coxe was like a father figure to me,” Hamilton said recently. “I was so glad that when I got my first away-from-home studio I brought him along. He relished that time on Main Street, to the Cloisters, and finally our permanent studio at 543 S. Shelby St. He did a lot of his important works prior to his passing at this last studio.”

The additional five paintings include three donated to The Filson by Kay Oliver in 2015, with the remainder on loan from Warren and Julie Payne, and Dr. Robert and Laura Douglas.

Aaron Rosenblum, associate curator of Special Collections, wanted to organize a Coxe exhibition after seeing the paintings. While best known for its 19th-century holdings, The Filson has started to build “a strong 20th-century collection,” he said.

Coxe created 12 series in his over 40 years as a professional artist. “He changed techniques and styles throughout his career,” said Rosenblum. “Even his signature changes. I called them all paintings but he had some sculptural ideas too.” Coxe mixed his own oil paints and built his own frames, as well as developing new ways of working with color washes and layering.

The show is arranged chronologically, from 1956 to 1995. One of his styles from the 1960s, “Signals” from The Filson’s collection, hints at traffic lights. His sensuous and beautiful “Gemini” group, including 1979’s “Gemini #79,” refers to the female body. The Douglas family lent this one; Robert Douglas, an emeritus professor of Pan-African Studies at UofL, described the series as “alluring without being vulgar.”

Coxe received the Governor’s Award in the Arts in 1987. The next year he painted “November ’88 (Totem Pole with Little People),” now part of Hamilton’s personal collection. It shows how figures, however faint, have not completely vanished from Coxe’s creative vocabulary even in the later part of his life.

On Nov. 6 at 6 p.m., Douglas, a member of the Louisville Art Workshop and Coxe biographer, will present “The Life and Art of G. Caliman Coxe: An American Experience or an African Legacy.” In addition, The Filson will host “From the Brown Derby to the Speed: A Panel on African American Arts in Louisville” on Dec. 7 at 6 p.m. The panel will include Douglas, Hamilton and sculptor William Duffy, another Workshop member. Glass artist and UofL professor Che Rhodes will moderate.