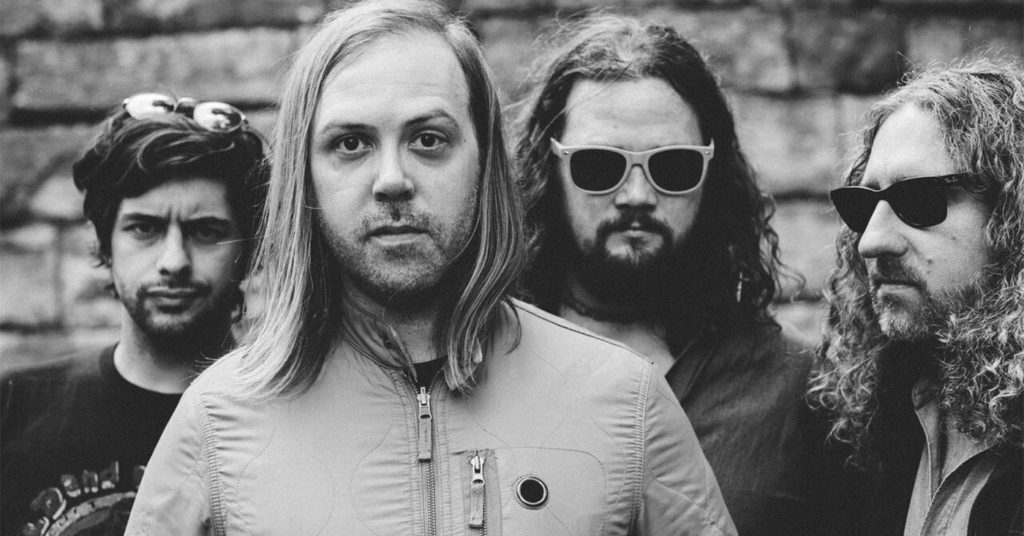 Pleasure Boys — “Waking Up (From Someone Else’s Dream)”
The Pleasure Boys have always made some of the most playfully-adventurous music out there, the sort that defies ready categorization. Are they garage rockers with a flare for the dramatic, psycho-poppers who know when to downshift, or rogue kraut-rock agents getting weird in the bible belt? With “Waking Up (From Someone Else’s Dream),” it’s all of the above and then some, a band pushing against its own boundaries. As such, this is a gleeful exploration of noise and texture, an atmospheric dreamland of groove-oriented pulses and bombastic freak outs. This is psychic warfare by way of explosive riffs and catchy hooks.

Wax Fang — “Glass Island” (feat. Lacey Guthrie)
The combination of Wax Fang with the lush voice of Lacey Guthrie of Twin Limb is a match made in heaven. Perhaps more than anything else they’ve ever released, “Glass Island” is the most superlative example of the band at their very best, at their most prone to bombastic heights, and somehow most accessible. The opening four minutes features Guthrie singing, the band at their most sedate, locked into a tight groove that explodes in glorious combustion of drums and guitar rock that would make Brian May weep tears of envious joy. As noted, there is an element of Queen just underneath the surface — complex compositions that never seem unnecessarily so, that every note is in its right place and is there for a reason. The eight-minute run time feels earned, a longform meditation on craft and style that pays off with a fantastic guitar solo, which is rarely to my taste. The thing is, “Glass Island” never feels flashy for the sake of showing off, but developed and allowed to fully breath in the space that it inhabits.

Yons — “The Campaign” (feat. Jordan Jetson and Metez)
Damn, Yons is fire. To my mind, it’s rare to get the full package, a producer that can kill it on the mic, but Yons has it. Joined by the incomparable Jordan Jetson, and up-and-comer Metez, “The Campaign” is classy and smooth as fuck. You put this on if anyone has anything but glowing praise for the local hip-hop scene, as an example of the greatness this city has to offer with the genre. Everyone is absolutely on point, whether it’s the ice cold beat or the lyrical mastery of everyone involved. This is clever and thoughtful music that tells a great story.

TrapKingKai — “Training Day” (ft. Phlegm & J.Boogie)
There is a jauntiness to the beat on “Training Day,” the newest from TrapKingKai, that gives it a fun shuffle. The verses, split by the aforementioned emcee TrapKingKai, as well as Phlegm and J. Boogie, lean into that bounciness for a track that has a chill energy that evokes sunshine and easy vibes. This is a thinker, the sort that you put on and soak in, meditating as much on the message as what it brings up in you. There is a Stones Throw kind of quality, undercut by the whimsy infused in the lyrics and music.

Dead Halos — “You Wreck Me”
It’s unlikely that you’ll find something that tugs at your heartstrings more this month than Dead Halos’ cover of “You Wreck Me,” by the late and great Tom Petty. This is an ideal song to show off the strengths of the band, a gritty, almost-punk version of a classic, rowdy and rough around the edges, just like Petty at his very best. The lo-fi production does wonders to the cover, capturing the original’s urgency in a new way.

Jack Harlow — “Dark Knight”
Jack Harlow continues to prove the hype with his latest single, “Dark Knight.” There is a sense of disquiet, from Harlow’s manic raps to the bob and weave of the beat, which features a nausea-inducing synth, shimmering in and out of existence in the background. The aforementioned beat is trap heavy and loaded with sub-bass of the sort that would thump hard on a decent system or live, where Harlow shines. This track has a lot of swagger and charm, playing well on multiple emotions and skittering between themes quickly from measure to measure, without ever seeming scattered or inconsistent. There is a malaise that Harlow leans into, a menacing quality that undercuts each and every subject that he touches on.