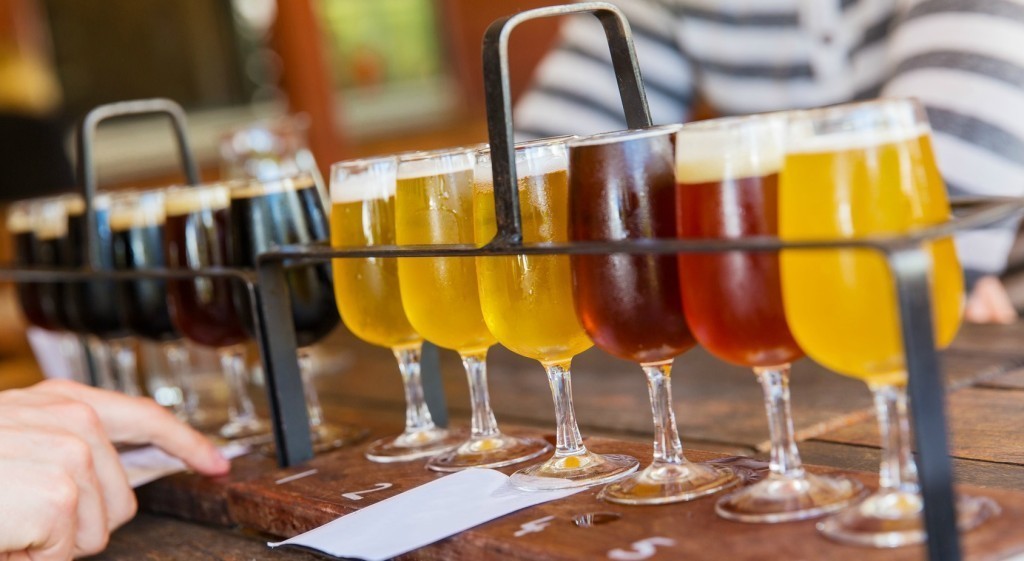 3rd Turn Brewing
County Line Marzen
By far the most traditional fall beer on this list, if only by virtue of the Märzen-style base, the Count Line Märzen is an ideal accompaniment to relaxing on your porch and enjoying the calm fall air. Clocking in at 6.4 percent ABV, the CLM has a deep and rich burgundy color, ringed by light white foam. This is sweet and has a thin body, which makes for easy return visits — a comforting presence to guide you through the increasingly longer nights to come.

Old Louisville Brewing Co.
Imperial Pumpkin Milk Stout
As noted in the title, there is a lot to process, and plenty that could go wrong. The lactose added in the milk side of the equation tends to skew stouts into creamier territory, which is not something traditionally associated with pumpkin flavoring, which usually contains more spice than an actual pumpkin. Here though, the three elements of the beer — the strong, 8.5 percent ABV Imperial aspect, the pumpkin and the milk — exists in a perfect harmony, with rich and creamy flavors that remain surprisingly robust and easy to drink. This is an incredibly filling beer, hearty, with a nice light sweetness.

Akasha Brewing Co.
1314 Wee Heavy
The 1314 Wee Heavy is a brown ale in spirit, with the heart of Belgian ale. It lives up to its name with a heady 8 percent ABV, making this one to pursue in moderation, despite the allure otherwise. The head on this beer is a light white ring, barely clinging to the sides, with a moderate brown body that gives off a malty, hoppy aroma. This is surprisingly easy going down, despite a definitive boozinees, with heavy malt finish and aftertaste for a warming and hearty ale.

Apocalypse Brew Works
Atomic Amber
There is something so inviting in the fall cool down about a nice amber ale, and the Atomic Amber scratches that itch in the best possible way. A red ale with an ABV of 5.4 percent and a low 39 IBU, the Atomic Amber has a crisp and malty marzen flavor, perhaps in an overtly Oktoberfest way. This is a rich, but not sweet beer, a comforting Autumnal brew with a thick white foam head across the entire head and deep auburn body.

Bluegrass Brewing Co.
Bourbon Barrel Stout
A staple of the Bluegrass Brewing Co., this current batch of Bourbon Barrel Stout is a truly superlative iteration on the brand. A gorgeous beer, the BBS has a pitch-black body ringed by a thick tan foam head, with an inviting chocolaty smell. It’s hard to point to anyone ingredient here as standing out, but the bourbon and chocolate notes are the perfect accompaniment to one another for a creamy and smooth brew that is not especially bitter. Rich without being overwhelmingly sweet, the BBS has a surprisingly thin body for a stout, making for easy repeat drinks. At 8.1 percent ABV though, you may want to save this for special occasions.

Mile Wide Beer Co.
Volksfestbier
The Mile Wide take on a Märzen-style ale, the Volksfestbier is malty and mildly sweet with roasted notes on the back end. The Volkfestbier is thin, which makes for an easy drink, crisp and with a slightly hoppy bite. At 6.2 percent ABV, this is a moderately strong brew with a hazy auburn body, rimmed with a light tannish foam head. This is the kind of beer you can easily knock back, highly drinkable and not terribly filling.

Cumberland Brewery
Coconut Porter
Coconut Porters are, in my experience, a dubious proposition, as the coconut flavoring, be that an additive or otherwise, can often come off as saccharine or syrupy. Fortunately, the brewers at Cumberland Brewery strike the perfect balance between coconut and porter, making for a smooth and inviting beer. Almost pitch black in body, the Coconut Porter is translucent only on the edges, topped by a soft froth, and a delightful aroma. At 5 percent ABV, this is ideal for brightening any situation with a splash of something different.

Donum Dei Brewery
Abbey Road Red
The Abbey Road Red walks a tightrope between malty and sweet, with a crisp flavor and pleasing floral notes up front. Just past a session beer at 5.7 percent ABV, the ARR has a body more brown than red, with a white cap lather at the head, and a hazy body.

Falls City Brewing Co.
King Louis XVI
Sold throughout town and in the brewery in bombers, the barrel-aged imperial Kentucky common has a heavy, 9.5 percent ABV. With a reddish hue that’s not quite amber, the King Louis XVi has a delicious bourbon finish that adds a nice pop on the back end, resulting in a beer that is easy and smooth with a wonderful finish. This is certainly a heavy drink, though not overwhelmingly boozy.

Goodwood Brewing Co.
Rum Barrel Octoberfest
Don’t escape the fall season without tasting the Rum Barrel Octoberfest, a walnut-brown-shaded ale, with a remarkably smooth finish. Clocking in at 7 percent ABV, the RBO features a thin body with a very wheaty finish that only enhances the aftertaste. The rum flavoring is sublime, making for a warming beer perfect for sitting on the porch with friends on a crisp autumn evening.

Flat 12 Bierwerks
Rowdy Rye Lager
The Rowdy Rye Lager is a hoppy and somehow spicy lager replete with a brownish gold body. A little hazy, but just barely, the RRL clocks in at a 6.6 percent ABV and 41 IBU, kind of like an amber/IPA. This is a beer with a great body, crisp, but not near as bitter as the IBU suggests, with a playful pop without a heavy aftertaste. This is a brisk lager with a host of interesting and difficult to identify flavors, making for an enjoyable cypher to consider while drinking.

Floyd County Brewing Co.
Arthur of the Britons
It was difficult to pick just one brew at the Floyd County Brewing Co., which features a number of beers perfect for gathering around someplace warm and telling stories with your friends. The Arthur of the Britons is an amber ale with a low, 5.2 percent, ABV and a burnt auburn body capped with a thin white ring of cap. Malty with Märzen-style scent, there is a slight sourness on the back end, one that hits you on the very back of your throat, cut nicely against the crisp Märzen qualities that comprise the base of the brew.

Gravely Brewing Co.
Aw Naw, Helles Naw
A Helles-style lager, this is a bright beer almost sparkles when you taste it. As such, expect a bubbly taste not unlike a domestic lager, but of a certainly higher and easier-to-drink quality — with a low, 5.1 percent, ABV.

Against the Grain Brewery
Flesh Gordon
Perhaps their most disconcertingly-titled brew, the Flesh Gordon is a pumpkin ale that uses real pumpkin and a mild, spice flavoring, cut perfectly by a smoked edge. A deep brown with a slightly reddish tint, Flesh Gordon is an excellent looking beer ringed by a gentle cream-colored foam cap that delicately clings to the rim of the glass. This is a heady brew with a 7.5 percent ABV that will catch up to you on repeat visits, dangerous considering how good this is.

Holsopple Brewing
Ebony Cascadian Dark Ale
Dark Ales are relatively uncommon in town, and Holsopple has crafted a great love song to the variety with the Ebony Cascadian Dark Ale. At 6.7 percent ABV, the ECDA has an opaque brown body that is relatively sediment heavy and capped with a thick tan foam head. This is a fresh tasting brew that is hop forward, similar to a black IPA, but less hearty. The ECDA caps off with a bitter, hoppy aftertaste, a nice tang that hits you on the back end.

New Albanian Brewing Co.
Community Dark
Living up to it’s name, the Community Dark is almost pitch black, a beer so dark that I once called it “truck juice” to  friend for its oil-like coloring. A very moderate 3.7 percent ABV and 13.2 IBU makes for a very mild brew in virtually every way. This is comparable to a table common, an approachable porch beer that is imminently sessionable, mellow with low carbonation and not much bite and roasted notes up front.

The Red Yeti
Abbey Style Dark
With a hazy brown body and light tan colored foam on the head, this is a spicy brew from aroma to taste. There is a nice pop up front, followed by a flavor palette that hints at notes of nutmeg or cinnamon, and balanced by a robust body with floral notes on the back end — a bit like licorice, but only mildly so. In fact, it almost tastes like there is a maybe a little basil on the tail end too, or sage, either way, an interesting addition to the beer. At 10 percent ABV, this is a heavy drink, but incredibly savory.