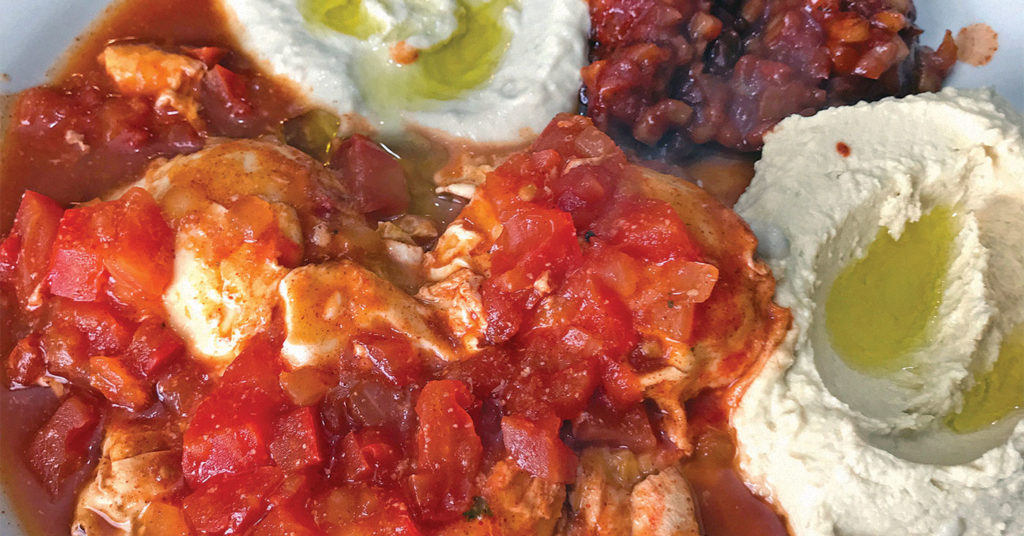 I don’t know anybody who thinks that the world is in great shape nowadays, and all the saber-rattling going on over Iran and North Korea is just the beginning. Things haven’t changed much since the 1960s, when the Kingston Trio famously sang in “The Merry Minuet,” “The whole world is festering with unhappy souls. The French hate the Germans. The Germans hate the Poles. Italians hate Yugoslavs. South Africans hate the Dutch … and I don’t like anybody very much!”

And that’s before we even start talking about the tensions that tear at Southwest Asia, that region of seemingly never-ending wars: Iraq and Syria and Lebanon and Israel and Palestine, oh my!

Will the world ever know peace in our time? I’ve got my doubts. But, my imagination fired with a delicious, filling meal at Jerusalem Kitchen, I’ve got an idea: What if we all tried just a little harder to get to know our neighbors through food?

I think it might work. Palestinians and Israelis may fight, or at least their governments do, but they all love hummus and baba ghanoug and chakchouka and shawarma and pitas and all manner of other good stuff that people enjoy all through the eastern end of the Mediterranean basin. Even gyros, which we’ll bet you thought were Greek.

I can’t think of a better way to adjust our attitudes about the whole region and its friendly people than to sit down and enjoy a good meal together, getting to know each other’s food. If not now, then when? If not us, then whom? Let’s start this thing with a happy trek out to Jerusalem Kitchen for a filling and affordable lunch or dinner!

Jerusalem Kitchen is the current incarnation of Little Jerusalem Cafe, having moved to Okolona from Iroquois Manor last winter. It is larger than its predecessor, with an extensive menu of much the same excellent, value-priced fare. It’s in a rather plain, white building just off Preston Highway opposite Southern High School.

Inside, it’s bright and attractive, two rooms separated by an 18-seat bar that appears well-stocked with standard-label beers and a small collection of liquor. The walls are gold over red, set off by dark beams that might befit a German Hofbräuhaus … or, heck, a Louisville Palestinian restaurant.

The menu is quite a bit more extensive than those at most of the region’s Mediterranean restaurants, which it superficially resembles, but with greater diversity. It extends to about 40 selections, subdivided into starters, salads, sandwiches, light meals, entrées, vegetarian and grilled selections, and it tops out at a very reasonable $12.95 (for grilled beef and lamb kabobs or lamb chops).

Warming cups of hot tea with cinnamon and cardamom and strong, dark Arabic coffee ($1.95 each) came in attractive pewter pots. The scented tea was comforting and calming. The coffee was fresh, dark and strong.

A half-dozen crunchy falafels ($5.95) made a great start. I’d rate them among the best I’ve tried anywhere, crisply fried to a dark-brown crunchy exterior with a tender chickpea-flour and parsley breadlike interior. It came with a seductive white sauce, not the usual tzatziki, but a smooth Palestinian-style tangy-creamy mix of tahini and lemon.

The menu’s division into “light plates” (all $9.95) and “entrees” ($10.96) is a little mysterious, as even the light plates are bountiful enough to prompt calls for takeout boxes for the leftovers.

Chakchouka ($9.95), sometimes spelled shakshuka, is one of my favorite brunch or light dinner dishes. It’s wildly popular in Palestine and Israel, and a virtually identical dish, uova all’inferno (eggs in hell) is an Italian favorite. Jerusalem Kitchen’s version is typical and good: Three eggs had been poached over-medium, simmered in a thick, chunky tomato sauce with a hint of spice that gave them an addictive flavor that was enhanced when the soft yolks run into the sauce.

This supposed light meal also comes with hummus, pitas and small portions of any two of the six salads (I chose the crunchy, spicy Turkish salad with tomatoes and onions and an order of baba ganoug, which is not really a salad, but hey.)

The hummus was remarkable, with plenty of tahini and tangy lemon to add oomph to the ground chickpeas. It was served with a lake of green olive oil at the center. The baba ganoug — hummus with smoky, grilled eggplant replacing chickpeas in the mix — was just as good. Maybe even better. The pitas were lightly toasted, thick and tender.

The gyros dinner ($9.95), as opposed to the standard $6.95 gyros sandwich, comes disassembled, with a succulent chopped beef-and-lamb mix spread atop a mound of hummus and sliced romaine, with a bowl of pitas on the side so you can assemble your own gyro or eat it deconstructed with knife and fork. Jerusalem salad served on the side featured chopped tomato, cucumber, onion and parsley in that light creamy lemon-tahini sauce.

A shared slice of baklava ($2.95) was decent, a little tough and dry, frankly, but full of the delicious flavors of nuts, honey and flaky phyllo.